Gonzales is located at 29°30′32"N 97°26′52"W (29.508801, -97.447709). It is located near the confluence of the San Marcos
San Marcos River
The San Marcos River rises from the San Marcos Springs, the location of Aquarena Springs, in San Marcos, Texas. The springs are home to several threatened or endangered species, including the Texas Blind Salamander, Fountain Darter, and Texas Wild Rice...
and Guadalupe
Guadalupe River (Texas)
The Guadalupe River runs from Kerr County, Texas to San Antonio Bay on the Gulf of Mexico. The river is a popular destination for rafters and canoers. Larger cities along the river include New Braunfels, Kerrville, Seguin, Gonzales, Cuero, and Victoria...
rivers. 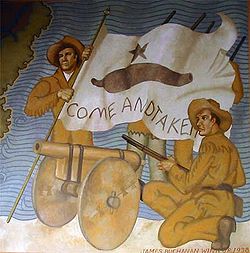 Gonzales is one of the earliest Anglo-American settlements in Texas, the first west of the Colorado River
Colorado River (Texas)
The Colorado River is a river that runs through the U.S. state of Texas; it should not be confused with the much longer Colorado River which flows from Colorado into the Gulf of California....
. It was established by Empresario
Empresario
An empresario was a person who, in the early years of the settlement of Texas, had been granted the right to settle on Mexican land in exchange for recruiting and taking responsibility for new settlers. The word is Spanish for entrepreneur.- Background :...
Green DeWitt
Green DeWitt
Green DeWitt was an empresario in Mexican Texas. He founded the DeWitt Colony, one of the most successful.-Early years:...
as the capital of his colony in August 1825. He named it for Rafael Gonzales, governor of Coahuila y Tejas
Coahuila y Tejas
Coahuila y Tejas was one of the constituent states of the newly established United Mexican States under its 1824 Constitution.It had two capitals: first Saltillo, and then Monclova...
. Informally, it was known as the Dewitt Colony
Dewitt Colony
The Dewitt Colony was a settlement in Mexican Texas founded by Green DeWitt. From lands belonging to that colony, the present Texas counties of DeWitt, Guadalupe and Lavaca were created...
.

The original settlement was abandoned in 1826 after two American Indian
Native Americans in the United States
Native Americans in the United States are the indigenous peoples in North America within the boundaries of the present-day continental United States, parts of Alaska, and the island state of Hawaii. They are composed of numerous, distinct tribes, states, and ethnic groups, many of which survive as...
attacks. It was rebuilt nearby in 1827. The town remains today as it was originally surveyed.

Gonzales is most famous as the "Lexington
Lexington, Massachusetts
Lexington is a town in Middlesex County, Massachusetts, United States. The population was 31,399 at the 2010 census. This town is famous for being the site of the first shot of the American Revolution, in the Battle of Lexington on April 19, 1775.- History :...
of Texas" because it was the site of the first skirmish of the Texas Revolution
Texas Revolution
The Texas Revolution or Texas War of Independence was an armed conflict between Mexico and settlers in the Texas portion of the Mexican state Coahuila y Tejas. The war lasted from October 2, 1835 to April 21, 1836...
. In 1831, the Mexican
Mexico
The United Mexican States , commonly known as Mexico , is a federal constitutional republic in North America. It is bordered on the north by the United States; on the south and west by the Pacific Ocean; on the southeast by Guatemala, Belize, and the Caribbean Sea; and on the east by the Gulf of...
government gave the settlers a small cannon for protection against Indian attacks. At the outbreak of settler hostilities, a contingent of Mexican soldiers was sent from San Antonio to retrieve the cannon. On 2 October 1835, Texians under the command of John H. Moore
Old Three Hundred
The Old Three Hundred is a term used to describe the 297 grantees, made up of families and some partnerships of unmarried men, who purchased 307 parcels of land from Stephen Fuller Austin and established a colony near present day Brenham in Washington County, Texas.Moses Austin was the original...
confronted them. The Texians had fashioned a flag with the words "Come and take it
Come and take it
"Come and take it" is a American patriotic slogan most notably used in the American Revolution in 1778 at Fort Morris in Georgia, and in the Texas Revolution in 1835....
". The Texians successfully resisted the federal troops in what became known as the Battle of Gonzales
Battle of Gonzales
The Battle of Gonzales was the first military engagement of the Texas Revolution. It was fought near Gonzales, Texas, on October 2, 1835, between rebellious Texian settlers and a detachment of Mexican army troops....
.

Gonzales later contributed thirty-two men from the Gonzales Ranging Company to the ill-fated defense of the Alamo
Alamo Mission in San Antonio
The Alamo, originally known as Mission San Antonio de Valero, is a former Roman Catholic mission and fortress compound, site of the Battle of the Alamo in 1836, and now a museum, in San Antonio, Texas....
. It was to Gonzales that Susanna Dickinson, widow of one of the Alamo defenders, and Joe, the slave of William B. Travis
William B. Travis
William Barret Travis was a 19th-century American lawyer and soldier. At the age of 26, he was a lieutenant colonel in the Texas Army...
, fled with news of the Alamo massacre. General Sam Houston
Sam Houston
Samuel Houston, known as Sam Houston , was a 19th-century American statesman, politician, and soldier. He was born in Timber Ridge in the Shenandoah Valley of Virginia, of Scots-Irish descent. Houston became a key figure in the history of Texas and was elected as the first and third President of...
was there organizing the Texas army and anticipated the town would be the next target of General Antonio López de Santa Anna
Antonio López de Santa Anna
Antonio de Padua María Severino López de Santa Anna y Pérez de Lebrón , often known as Santa Anna or López de Santa Anna, known as "the Napoleon of the West," was a Mexican political leader, general, and president who greatly influenced early Mexican and Spanish politics and government...
and the Mexican army. He had the town burned and ordered a retreat, thus precipitating the Runaway Scrape
Runaway Scrape
The Runaway Scrape was the name given to the flight and subsequent hostilities that occurred, as Texan, Tejano, and American settlers and militia encountered the pursuing Mexican army in early 1836....
.

The town was derelict immediately after the Texas Revolution, but was eventually rebuilt on the original site throughout the early 1840s. By 1850, it had a population of 300. The newspaper the Gonzales Inquirer was established in 1853. It is one of the six oldest county newspapers still operating in Texas. The population rose to 1,703 in the 1860 census
Census
A census is the procedure of systematically acquiring and recording information about the members of a given population. It is a regularly occurring and official count of a particular population. The term is used mostly in connection with national population and housing censuses; other common...
, 2,900 by the mid-1880s, and 4,297 in 1900. Part of the growth of the late 19th century can be attributed to the arrival of various immigrants, among them Jews, many of whom became merchants and peddlers.

As of the census
Census
A census is the procedure of systematically acquiring and recording information about the members of a given population. It is a regularly occurring and official count of a particular population. The term is used mostly in connection with national population and housing censuses; other common...
of 2000, there were 7,202 people, 2,571 households, and 1,763 families residing in the city. The population density
Population density
Population density is a measurement of population per unit area or unit volume. It is frequently applied to living organisms, and particularly to humans...
was 1,412.8 people per square mile (545.2/km²). There were 2,869 housing units at an average density of 562.8 per square mile (217.2/km²). The racial makeup of the city was 62.95% White, 12.40% African American, 0.74% Native American, 0.50% Asian, 0.10% Pacific Islander, 21.15% from other races
Race (United States Census)
Race and ethnicity in the United States Census, as defined by the Federal Office of Management and Budget and the United States Census Bureau, are self-identification data items in which residents choose the race or races with which they most closely identify, and indicate whether or not they are...
, and 2.17% from two or more races. Hispanic or Latino of any race were 46.13% of the population.

There were 2,571 households out of which 36.0% had children under the age of 18 living with them, 47.0% were married couples
Marriage
Marriage is a social union or legal contract between people that creates kinship. It is an institution in which interpersonal relationships, usually intimate and sexual, are acknowledged in a variety of ways, depending on the culture or subculture in which it is found...
living together, 15.7% had a female householder with no husband present, and 31.4% were non-families. 28.2% of all households were made up of individuals and 16.5% had someone living alone who was 65 years of age or older. The average household size was 2.73 and the average family size was 3.35.

The median income for a household in the city was $27,226, and the median income for a family was $34,663. Males had a median income of $22,804 versus $18,217 for females. The per capita income
Per capita income
Per capita income or income per person is a measure of mean income within an economic aggregate, such as a country or city. It is calculated by taking a measure of all sources of income in the aggregate and dividing it by the total population...
for the city was $12,866. About 14.8% of families and 20.9% of the population were below the poverty line, including 25.5% of those under age 18 and 23.0% of those age 65 or over.