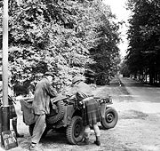 Encyclopedia
The Glider Pilot Regiment was a British airborne forces
Airborne forces
Airborne forces are military units, usually light infantry, set up to be moved by aircraft and 'dropped' into battle. Thus they can be placed behind enemy lines, and have an ability to deploy almost anywhere with little warning...
unit of the Second World War which was responsible for crewing the British Army
British Army
The British Army is the land warfare branch of Her Majesty's Armed Forces in the United Kingdom. It came into being with the unification of the Kingdom of England and Scotland into the Kingdom of Great Britain in 1707. The new British Army incorporated Regiments that had already existed in England...
's military glider
Military glider
Military gliders have been used by the military of various countries for carrying troops and heavy equipment to a combat zone, mainly during the Second World War. These engineless aircraft were towed into the air and most of the way to their target by military transport planes, e.g...
s and saw action in the European Theatre of World War II
European Theatre of World War II
The European Theatre of World War II was a huge area of heavy fighting across Europe from Germany's invasion of Poland on September 1, 1939 until the end of the war with the German unconditional surrender on May 8, 1945...
in support of Allied airborne operations. Established in 1942, the regiment was disbanded in 1957.

A Glider Training Squadron was formed, and the first test-flights were conducted using British Aircraft Swallow
British Aircraft Swallow
|-See also:-References:*Jackson, A.J. British Civil Aircraft since 1919 Volume 1. London: Putnam, 1974. ISBN 0-370-10006-9.* Scholefield, R.A. Manchester Airport. Stroud: Sutton Publishing Ltd, 1998. ISBN 0-7509-1954-X....
light aircraft which had their propellors removed to simulate the flight characteristics of a glider; they were towed by the Whitley bombers using tow-ropes of varying number and length for experimentation purposes. Appeals were made throughout the United Kingdom for civilian gliders to be donated to the squadron, and the first four arrived in August; three of them had been manufactured in pre-war Germany. Within a short period of time several more were donated, and these were put to use training instructors, glider pilots and newly-formed ground crews. Accidents were quite frequent in these early months, primarily due to the hemp
Hemp
Hemp is mostly used as a name for low tetrahydrocannabinol strains of the plant Cannabis sativa, of fiber and/or oilseed varieties. In modern times, hemp has been used for industrial purposes including paper, textiles, biodegradable plastics, construction, health food and fuel with modest...
tow-ropes breaking during flight; these problems were only solved with the introduction of nylon
Nylon
Nylon is a generic designation for a family of synthetic polymers known generically as polyamides, first produced on February 28, 1935, by Wallace Carothers at DuPont's research facility at the DuPont Experimental Station...
tow-ropes imported from the United States of America. The first demonstration of the squadron's abilities took place on 26 September, when Prince George, Duke of Kent
Prince George, Duke of Kent
Prince George, Duke of Kent was a member of the British Royal Family, the fourth son of George V and Mary of Teck, and younger brother of Edward VIII and George VI...
witnessed a demonstration of the fledgling airborne establishment's capabilities; four parachute-drops were conducted, and then two gliders were towed by civilian aircraft. This was followed on 26 October by a night exercise being conducted by the squadron, with two Avro 504s towing four gliders, and on 13 December five gliders were towed to Tatton Park
Tatton Park
Tatton Park is a historic estate in Cheshire, England, to the north of the town of Knutsford. It contains a mansion, Tatton Hall, a manor house dating from medieval times, Tatton Old Hall, gardens, a farm and a deer park of . It is a popular visitor attraction and hosts over 100 events annually...
, where they landed alongside sixteen parachutists dropped from two Whitley bombers.

There was a certain carefree atmosphere present in the squadron in the first few months of its existence; new recruits were not obliged to pass a medical test to join the squadron, and it attracted a number of adventurous-minded men with a passion for flying, including a sergeant
Sergeant
Sergeant is a rank used in some form by most militaries, police forces, and other uniformed organizations around the world. Its origins are the Latin serviens, "one who serves", through the French term Sergent....
who had flown a Messerschmitt
Messerschmitt
Messerschmitt AG was a famous German aircraft manufacturing corporation named for its chief designer, Willy Messerschmitt, and known primarily for its World War II fighter aircraft, notably the Bf 109 and Me 262...
during the Spanish Civil War
Spanish Civil War
The Spanish Civil WarAlso known as The Crusade among Nationalists, the Fourth Carlist War among Carlists, and The Rebellion or Uprising among Republicans. was a major conflict fought in Spain from 17 July 1936 to 1 April 1939...
. These first pilots had been volunteers recruited from all of the branches of the armed forces, primarily the Army, but as the squadron began to conduct training exercises, arguments broke out between the RAF and the Army over the pilots. In the view of the RAF, gliders were aircraft and were therefore in their jurisdiction and should be controlled by them; the Army argued that as the glider pilots would subsequently be fighting alongside the troops they were transporting after the gliders had landed, they should therefore come under Army control. After much debate, a compromise was brokered between the two services: the pilots would be recruited from the Army, but they would be trained by the RAF.

Volunteers were sought from the Army and these had to be passed by RAF selection procedures before entering training. Once qualified as light aircraft pilots after a 12 week course, they were given further training on gliders: another 12 week course to qualify on the General Aircraft Hotspur glider. After a period they would then go to a Heavy Glider Conversion Unit for a six week course so they were qualified for the Airspeed Horsa
Airspeed Horsa
The Airspeed AS.51 Horsa was a British World War II troop-carrying glider built by Airspeed Limited and subcontractors and used for air assault by British and Allied armed forces...
.