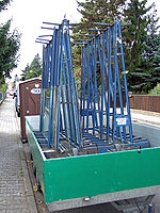 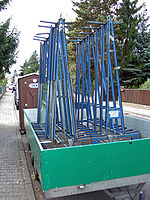 Glazing, which derives from the Middle English
Middle English
Middle English is the stage in the history of the English language during the High and Late Middle Ages, or roughly during the four centuries between the late 11th and the late 15th century....
for 'glass', is a part of a wall
Wall
A wall is a usually solid structure that defines and sometimes protects an area. Most commonly, a wall delineates a building and supports its superstructure, separates space in buildings into rooms, or protects or delineates a space in the open air...
or window
Window
A window is a transparent or translucent opening in a wall or door that allows the passage of light and, if not closed or sealed, air and sound. Windows are usually glazed or covered in some other transparent or translucent material like float glass. Windows are held in place by frames, which...
, made of glass
Glass
Glass is an amorphous solid material. Glasses are typically brittle and optically transparent.The most familiar type of glass, used for centuries in windows and drinking vessels, is soda-lime glass, composed of about 75% silica plus Na2O, CaO, and several minor additives...
. Glazing also describes the work done by a professional "glazier
Glazier
A Glazier is a construction professional who selects, cuts, installs, replaces, and removes residential, commercial, and artistic glass. Glaziers also install aluminum storefront frames and entrances, glass handrails and balustrades, shower enclosures, curtain wall framing and glass and mirror...
". Glazing is also (less commonly) used to describe the insertion of ophthalmic lenses into an eyeglass frame.

Common types of glazing that are used in architectural applications include clear and tinted float glass
Float glass
Float glass is a sheet of glass made by floating molten glass on a bed of molten metal, typically tin, although lead and various low melting point alloys were used in the past. This method gives the sheet uniform thickness and very flat surfaces. Modern windows are made from float glass...
, tempered glass, and laminated glass as well as a variety of coated glasses, all of which can be glazed singly or as double, or even triple
Insulated glazing
Insulated glazing also known as double glazing are double or triple glass window panes separated by an air or other gas filled space to reduce heat transfer across a part of the building envelope....
, glazing units. Ordinary clear glass has a slight green tinge but special clear glasses are offered by several manufacturers.

Glazing can be mounted into a window
Window
A window is a transparent or translucent opening in a wall or door that allows the passage of light and, if not closed or sealed, air and sound. Windows are usually glazed or covered in some other transparent or translucent material like float glass. Windows are held in place by frames, which...
sash
Sash window
A sash window or hung sash window is made of one or more movable panels or "sashes" that form a frame to hold panes of glass, which are often separated from other panes by narrow muntins...
or door
Door
A door is a movable structure used to open and close off an entrance, typically consisting of a panel that swings on hinges or that slides or rotates inside of a space....
stile
Frame and panel
Frame and panel construction is a woodworking technique often used in the making of doors, wainscoting, and other decorative features for cabinets, furniture, and homes...
, usually made of wood
Wood
Wood is a hard, fibrous tissue found in many trees. It has been used for hundreds of thousands of years for both fuel and as a construction material. It is an organic material, a natural composite of cellulose fibers embedded in a matrix of lignin which resists compression...
, aluminium
Aluminium
Aluminium or aluminum is a silvery white member of the boron group of chemical elements. It has the symbol Al, and its atomic number is 13. It is not soluble in water under normal circumstances....
or PVC
Polyvinyl chloride
Polyvinyl chloride, commonly abbreviated PVC, is a thermoplastic polymer. It is a vinyl polymer constructed of repeating vinyl groups having one hydrogen replaced by chloride. Polyvinyl chloride is the third most widely produced plastic, after polyethylene and polypropylene. PVC is widely used in...
. The glass is fixed into a rabbet (rebate)
Rabbet
A rabbet is a recess or groove cut into the edge of a piece of machineable material, usually wood. When viewed in cross-section, a rabbet is two-sided and open to the edge or end of the surface into which it is cut....
in the frame in a number of ways including triangular glazing points, putty
Putty
Putty is a generic term for a plastic material similar in texture to clay or dough typically used in domestic construction and repair as a sealant or filler. Painter's Putty is typically a linseed oil based product used for filling holes, minor cracks and defacements in wood only...
, etc.. Toughened and laminated glass can be glazed by bolting panes directly to a metal framework by bolts passing through drilled holes.