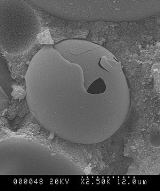 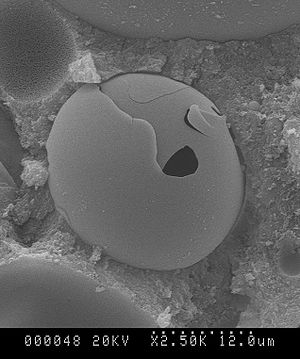 Glass microspheres are microscopic
Microscopic
The microscopic scale is the scale of size or length used to describe objects smaller than those that can easily be seen by the naked eye and which require a lens or microscope to see them clearly.-History:...
spheres of glass
Glass
Glass is an amorphous solid material. Glasses are typically brittle and optically transparent.The most familiar type of glass, used for centuries in windows and drinking vessels, is soda-lime glass, composed of about 75% silica plus Na2O, CaO, and several minor additives...
manufactured for a wide variety of uses in research
Research
Research can be defined as the scientific search for knowledge, or as any systematic investigation, to establish novel facts, solve new or existing problems, prove new ideas, or develop new theories, usually using a scientific method...
, medicine
Medicine
Medicine is the science and art of healing. It encompasses a variety of health care practices evolved to maintain and restore health by the prevention and treatment of illness....
, consumer goods and various industries. Glass microspheres are usually between 1 to 1000 micrometers in diameter, although the sizes can range from 100 nanometers to 5 millimeters in diameter. Hollow glass microspheres, sometimes termed microballoons, or glass bubbles have diameters ranging from 10 to 300 micrometer
Micrometre
A micrometer , is by definition 1×10-6 of a meter .In plain English, it means one-millionth of a meter . Its unit symbol in the International System of Units is μm...
s.

Hollow spheres are used as a lightweight filler
Aggregate (composite)
Aggregate is the component of a composite material that resists compressive stress and provides bulk to the composite material. For efficient filling, aggregate should be much smaller than the finished item, but have a wide variety of sizes...
in composite material
Composite material
Composite materials, often shortened to composites or called composition materials, are engineered or naturally occurring materials made from two or more constituent materials with significantly different physical or chemical properties which remain separate and distinct at the macroscopic or...
s such as syntactic foam
Syntactic foam
Syntactic foams are composite materials synthesized by filling a metal, polymer or ceramic matrix with hollow particles called microballoons, "syntactic" meaning "put together"...
and lightweight concrete. Microballoons give syntactic foam its light weight, low thermal conductivity
Thermal conductivity
In physics, thermal conductivity, k, is the property of a material's ability to conduct heat. It appears primarily in Fourier's Law for heat conduction....
, and a resistance to compressive stress that far exceeds that of other foams. These properties are exploited in the hulls of submersible
Submersible
A submersible is a small vehicle designed to operate underwater. The term submersible is often used to differentiate from other underwater vehicles known as submarines, in that a submarine is a fully autonomous craft, capable of renewing its own power and breathing air, whereas a submersible is...
s and deep-sea oil drilling equipment, where other types of foam would implode. Hollow spheres of other materials create syntactic foams with different properties, for example ceramic balloons can make a light syntactic aluminium
Aluminium
Aluminium or aluminum is a silvery white member of the boron group of chemical elements. It has the symbol Al, and its atomic number is 13. It is not soluble in water under normal circumstances....
foam.

Hollow spheres also have uses ranging from storage and slow release of pharmaceuticals and radioactive tracer
Radioactive tracer
A radioactive tracer, also called a radioactive label, is a substance containing a radioisotope that is used to measure the speed of chemical processes and to track the movement of a substance through a natural system such as a cell or tissue...
s to research in controlled storage
Hydrogen storage
Hydrogen storage describes the methods for storing H2 for subsequent use. The methods span many approaches, including high pressures, cryogenics, and chemical compounds that reversibly release H2 upon heating...
and release of hydrogen
Hydrogen
Hydrogen is the chemical element with atomic number 1. It is represented by the symbol H. With an average atomic weight of , hydrogen is the lightest and most abundant chemical element, constituting roughly 75% of the Universe's chemical elemental mass. Stars in the main sequence are mainly...
. Microspheres are also used in composites to fill polymer resins for specific characteristics such as weight, sandability and sealing surfaces. When making surfboards for example, shapers seal the EPS foam blanks with epoxy and microballoons to create an impermeable and easily sanded surface upon which fiberglass laminates are applied.

Glass microspheres can be made by heating tiny droplets of dissolved water glass
Sodium silicate
Sodium silicate is the common name for a compound sodium metasilicate, Na2SiO3, also known as water glass or liquid glass. It is available in aqueous solution and in solid form and is used in cements, passive fire protection, refractories, textile and lumber processing, and automobiles...
in a process known as ultrasonic
Ultrasound
Ultrasound is cyclic sound pressure with a frequency greater than the upper limit of human hearing. Ultrasound is thus not separated from "normal" sound based on differences in physical properties, only the fact that humans cannot hear it. Although this limit varies from person to person, it is...
spray pyrolysis
Pyrolysis
Pyrolysis is a thermochemical decomposition of organic material at elevated temperatures without the participation of oxygen. It involves the simultaneous change of chemical composition and physical phase, and is irreversible...
, and properties can be improved somewhat by using an acid treatment to remove some of the sodium
Sodium
Sodium is a chemical element with the symbol Na and atomic number 11. It is a soft, silvery-white, highly reactive metal and is a member of the alkali metals; its only stable isotope is 23Na. It is an abundant element that exists in numerous minerals, most commonly as sodium chloride...
. Sodium depletion has also allowed hollow glass microspheres to be used in chemically sensitive resin systems, such as long pot life epoxies or non-blown polyurethane composites

Additional functionalities, such as silane coatings, are commonly added to the surface of hollow glass microspheres to increase the matrix/microspheres interfacial strength (the common failure point when stressed in a tensile manner).

Glass microspheres are also produced as waste product in coal-fired power stations. Small amounts of silica in the coal are melted and as they rise up the chimneystack, which expands and forms small hollow spheres. These spheres are collected together with the ash, which is pumped in a water mixture to the resident ash dam. Some of the particles do not become hollow and sink in the ash dams, while the hollow ones float on the surface of the dams. They become a nuisance, especially when they dry, as they become airborne and blow over into surrounding areas.