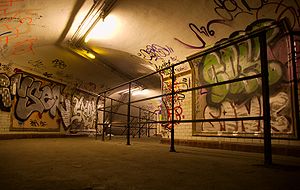 Ghost stations is the usual English translation for the German word Geisterbahnhöfe. This term was used to describe certain stations on Berlin
Berlin
Berlin is the capital city of Germany and is one of the 16 states of Germany. With a population of 3.45 million people, Berlin is Germany's largest city. It is the second most populous city proper and the seventh most populous urban area in the European Union...
's U-Bahn
Berlin U-Bahn
The Berlin is a rapid transit railway in Berlin, the capital city of Germany, and is a major part of the public transport system of that city. Opened in 1902, the serves 173 stations spread across ten lines, with a total track length of , about 80% of which is underground...
and S-Bahn
Berlin S-Bahn
The Berlin S-Bahn is a rapid transit system in and around Berlin, the capital city of Germany. It consists of 15 lines and is integrated with the mostly underground U-Bahn to form the backbone of Berlin's rapid transport system...
metro networks that were closed during the period of Berlin's division during the Cold War
Cold War
The Cold War was the continuing state from roughly 1946 to 1991 of political conflict, military tension, proxy wars, and economic competition between the Communist World—primarily the Soviet Union and its satellite states and allies—and the powers of the Western world, primarily the United States...
. Since then, the term has come to be used to describe any disused station on an underground railway line, especially those used by passing passenger trains. 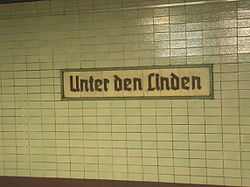 The situation described was obviously less than ideal. The lines were a vital part of the West Berlin
West Berlin
West Berlin was a political exclave that existed between 1949 and 1990. It comprised the western regions of Berlin, which were bordered by East Berlin and parts of East Germany. West Berlin consisted of the American, British, and French occupation sectors, which had been established in 1945...
transit network, but because part of their length lay in East Berlin territory, it was difficult for western support staff to do needed maintenance work on the tracks and tunnels. If a western train broke down in East Berlin territory, then passengers would need to wait for Eastern border police to appear and escort them out. The East German government occasionally hinted that it might someday block access to the tunnels at the border and run its own service on the East Berlin sections of these lines. However, this awkward status quo persisted for the entire 28-year period of the division of Berlin.

Friedrichstraße
Berlin Friedrichstraße railway station
Berlin Friedrichstraße is a railway station in the German capital Berlin. It is located on the Friedrichstraße, a major north-south street in the Mitte district of Berlin, adjacent to the point where the street crosses the Spree river...
station, though served by western lines and located in East Berlin territory, was not a Geisterbahnhof. Instead, it served as a transfer point between U6
U6 (Berlin U-Bahn)
U6 is a 19.9 km-long line on the Berlin U-Bahn with 29 stations. It belongs to the Großprofilnetz, that is larger profile rail vehicles run through its larger tunnels...
and several S-Bahn lines. Western passengers could walk from one platform to another without ever leaving the station or needing to show papers, much like air travellers changing planes at an international airport. Westerners with appropriate papers (visa
Visa (document)
A visa is a document showing that a person is authorized to enter the territory for which it was issued, subject to permission of an immigration official at the time of actual entry. The authorization may be a document, but more commonly it is a stamp endorsed in the applicant's passport...
s) could also enter East Berlin here.

The Bornholmer Straße S-Bahn station was the only ghost station not located in a tunnel. It was situated close to the wall nearby the Bornholmer Straße border crossing. West Berlin trains passed through it without stopping. East Berlin S-Bahn trains passed the same station close by on different tracks. The tracks used by western and eastern trains were sealed off from each other by a tall fence.

Another oddity was Wollankstraße
Berlin Wollankstraße railway station
Berlin Wollankstraße is a railway station in the Pankow district of Berlin, Germany. It is served by the Berlin S-Bahn and several local buses.-History:...
station. Like Bornholmer Straße, it was an S-Bahn stop served by West Berlin trains but located on East Berlin territory just behind the border. However, Wollankstraße was in use and accessible for West Berliners, as one of its exits was open to a West Berlin street; this exit was exactly on the border line, a warning sign next to it informing passengers about the situation. Its other exits towards East Berlin streets were locked.

The first people to enter the ghost stations after the fall of the Berlin Wall
Berlin Wall
The Berlin Wall was a barrier constructed by the German Democratic Republic starting on 13 August 1961, that completely cut off West Berlin from surrounding East Germany and from East Berlin...
in November 1989 found that they lived up to their name, with the ads and signage on the walls being unchanged since 1961. None of these have been preserved.

On 12 April 1990, the third station to reopen was Bernauer Straße
Bernauer Straße (Berlin U-Bahn)
Bernauer Straße is a Berlin U-Bahn station located on the .Build by the great subway architect A. Grenander in 1930 this station was a station of the GN Bahn of line D. In April 1945 it was closed due to the war. Opened again in May 1945 until building of the Berlin wall on Aug 13, 1961.The...
(U8). As its northern exit was directly on the border, it could be opened with direct access to West Berlin without the need of a checkpoint. Its southern exit towards East Berlin was not reopened until 1 July 1990, the same date all the other stations on U6
U6 (Berlin U-Bahn)
U6 is a 19.9 km-long line on the Berlin U-Bahn with 29 stations. It belongs to the Großprofilnetz, that is larger profile rail vehicles run through its larger tunnels...
and U8 were opened without checkpoints, as on this day East Berlin and East Germany proper adopted the West German currency, allowing all border controls between the two states to be abandoned. 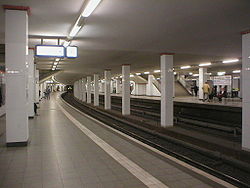 In the following years, the city and German government put a great deal of effort into restoring and reunifying the S-Bahn and U-Bahn networks in Berlin. The U-Bahn system reached its pre-wall status in 1995 with the reopening of Warschauer Straße on U1
U1 (Berlin U-Bahn)
U1 is a line on the Berlin U-Bahn, which is 8.8 km long and has 13 stations. Its traditional line designation was BII. It runs east-west and its eastern end is immediately south of the route of the historical Schlesischen Bahn at the Warschauer Straße S-Bahn station and runs through...
. The S-Bahn system reached a preliminary completion in 2002 (with the reopening of the ring), even though there are still disused sections of lines closed in the aftermath of the wall. Decisions on reopening of some of these sections are still to be made.

Please note that this list only includes those stations in East Berlin territory that western trains passed through without stopping. There were other stations on both sides of the wall that were closed during the division because sections of track were not in use.

Temporary checkpoints were set up for stations with access to East Berlin
East Berlin
East Berlin was the name given to the eastern part of Berlin between 1949 and 1990. It consisted of the Soviet sector of Berlin that was established in 1945. The American, British and French sectors became West Berlin, a part strongly associated with West Germany but a free city...
which were reopened before 1 July 1990. Checkpoints were no longer necessary for those reopened after that date when border checks were eliminated with the currency union between East and West Germany.

Except for Berlin.
The article on German Wikipedia contains several unused surface stations, or unused underground stations without traffic.


Moscow Metro
Moscow Metro
The Moscow Metro is a rapid transit system serving Moscow and the neighbouring town of Krasnogorsk. Opened in 1935 with one line and 13 stations, it was the first underground railway system in the Soviet Union. As of 2011, the Moscow Metro has 182 stations and its route length is . The system is...