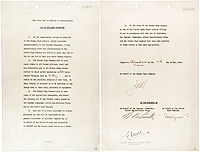 The German Instrument of Surrender was the legal instrument
Legal instrument
Legal instrument is a legal term of art that is used for any formally executed written document that can be formally attributed to its author, records and formally expresses a legally enforceable act, process, or contractual duty, obligation, or right, and therefore evidences that act, process, or...
that established the armistice
Armistice
An armistice is a situation in a war where the warring parties agree to stop fighting. It is not necessarily the end of a war, but may be just a cessation of hostilities while an attempt is made to negotiate a lasting peace...
ending World War II in Europe. It was signed by representatives of the Oberkommando der Wehrmacht
Oberkommando der Wehrmacht
The Oberkommando der Wehrmacht was part of the command structure of the armed forces of Nazi Germany during World War II.- Genesis :...
(OKW) and the Allied Expeditionary Force together with the Soviet High Command, French representative signing as witness on 7 May, and signed again by representatives of the three armed services
Armed Services
Armed Services is a collective term that refers to the major organisational entities of national armed forces, so named because they service a combat need in a specific combat environment. In most states Armed Services include the Army also known as Land Force or Ground Force, Navy also know a...
of the OKW and the Allied Expeditionary Force together with the Supreme High Command of the Red Army, French and US representatives signing as witnesses (see: Allies of World War II
Allies of World War II
The Allies of World War II were the countries that opposed the Axis powers during the Second World War . Former Axis states contributing to the Allied victory are not considered Allied states...
) on 8 May 1945. The date is known in the West as Victory in Europe Day
Victory in Europe Day
Victory in Europe Day commemorates 8 May 1945 , the date when the World War II Allies formally accepted the unconditional surrender of the armed forces of Nazi Germany and the end of Adolf Hitler's Third Reich. The formal surrender of the occupying German forces in the Channel Islands was not...
, whereas in post-Soviet states the Victory Day is celebrated on 9 May. In Germany, it is known as the Day of Capitulation (Tag der Kapitulation).

There were three language versions of the surrender document. The English and Russian versions were the only authoritative ones.


that the capitulation of Germany should be recorded in a single document of unconditional surrender.

The committee further suggested that the instrument of surrender be signed by representatives of the German High Command. The considerations behind this recommendation were to prevent the repetition of the stab-in-the-back legend, created in Germany following defeat in the First World War, since the act of surrender in November 1918 was signed by representatives of the German government and the militarist circles later claimed that the High Command was not responsible for that defeat.


It is impossible at present to foresee in what circumstances hostilities with Germany may in the end be suspended. We cannot tell, therefore, what mode of procedure would be most suitable; whether, for example, it will be found best to have a full and detailed armistice; or a shorter armistice conferring general powers; or possibly no armistice at all, but a series of local capitulations by enemy commanders.


The surrender terms for Germany were first discussed at the first EAC meeting on 14th January 1944.

On 14th March 1945 the EAC held a meeting with the representatives of Czechoslovakia, the Netherlands, Belgium, Luxembourg, Norway, Yugoslavia and Greece on the issue of the instrument of surrender. The Czech government proposed the document shall include a paragraph against acquisition of territories by force and would mention the responsibility of the German state to the war. The governments of Belgium, Netherlands and Luxembourg, concerned with their positions as small Allied nations, recommended that the instrument of surrender shall include a specific acknowledgement of the part to be played by the small countries in the control of Germany. The Norwegian government requested the document to include specific reference to the demand of surrender of the German troops in Norway. The Yugoslav government declared its intention to refrain from any specific recommendations until an agreement on unity government was reached between Josip Broz Tito
Josip Broz Tito
Marshal Josip Broz Tito – 4 May 1980) was a Yugoslav revolutionary and statesman. While his presidency has been criticized as authoritarian, Tito was a popular public figure both in Yugoslavia and abroad, viewed as a unifying symbol for the nations of the Yugoslav federation...
and Prime Minister Ivan Šubašić
Ivan Šubašic
Ivan Šubašić was a Croatian and Yugoslav politician, best known as the last Ban of Banovina of Croatia.He was born in Vukova Gorica, then in Austria-Hungary. He finished grammar and high school in Zagreb, and enrolled onto the Faculty of Theology at the University of Zagreb...
. The Greek government requested to include in the document a demand to all German forces that may remain on Greek territory at the moment of surrender to surrender their military equipment to the Greek Royal government.

The first instrument of Surrender was signed at Rheims, France, at 02:41 hours on 7 May 1945. The signing took place in a red brick schoolhouse that served as the Supreme Headquarters Allied Expeditionary Force (SHAEF). It was to take effect at 2301 hours Central European time on 8 May 1945.

The unconditional surrender
Unconditional surrender
Unconditional surrender is a surrender without conditions, in which no guarantees are given to the surrendering party. In modern times unconditional surrenders most often include guarantees provided by international law. Announcing that only unconditional surrender is acceptable puts psychological...
of the German armed forces was signed by Generaloberst
Colonel General
Colonel General is a senior rank of General. North Korea and Russia are two countries which have used the rank extensively throughout their histories...
Alfred Jodl
Alfred Jodl
Alfred Josef Ferdinand Jodl was a German military commander, attaining the position of Chief of the Operations Staff of the Armed Forces High Command during World War II, acting as deputy to Wilhelm Keitel...
, on behalf of the Oberkommando der Wehrmacht
Oberkommando der Wehrmacht
The Oberkommando der Wehrmacht was part of the command structure of the armed forces of Nazi Germany during World War II.- Genesis :...
(German language: High Command of armed forces) and as the representative for the new Reich President
Reichspräsident
The Reichspräsident was the German head of state under the Weimar constitution, which was officially in force from 1919 to 1945. In English he was usually simply referred to as the President of Germany...
, Grand Admiral
Grand Admiral
Grand admiral is a historic naval rank, generally being the highest such rank present in any particular country. Its most notable use was in Germany — the German word is Großadmiral.-France:...
Karl Dönitz
Karl Dönitz
Karl Dönitz was a German naval commander during World War II. He started his career in the German Navy during World War I. In 1918, while he was in command of , the submarine was sunk by British forces and Dönitz was taken prisoner...
. Walter Bedell Smith
Walter Bedell Smith
Walter Bedell "Beetle" Smith was a senior United States Army general who served as General Dwight D. Eisenhower's chief of staff at Allied Forces Headquarters during the Tunisia Campaign and the Allied invasion of Italy...
signed on behalf of the Western Allies, and Ivan Susloparov
Ivan Susloparov
Ivan Alekseyevich Susloparov was a Soviet general who served as the Military Liaison Mission Commander with the French government and the Allied Expeditionary Force in Europe in 1944-45. He is mostly known as the person who signed for the Soviet Union the German Instrument of Surrender on May 7,...
on behalf of the Soviets. French major general François Sevez
François Sevez
François Sevez was a French general during World War II. Sevez was present at the German surrender in Rheims, and signed the German Instrument of Surrender as the official witness.-Military career:...
signed as the official witness.

Since the Rheims ceremony was arranged by the Western Allies without agreement with the Soviet Command, shortly after the surrender had been signed the latter announced that the Soviet representative in Rheims, General Susloparov, had no authority to sign this document. In addition, it had been found that the document signed in Rheims was different from the draft prepared earlier, which had been approved by the Big Three. Importantly, a part of Wehrmacht refused to lay down their arms and continued to fight in Czechoslovakia; it has been stated in a German radio broadcast that the Germans made peace with the Western Allies, but not with the Soviets.