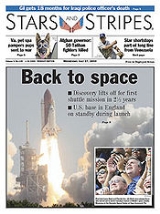 In May 1965 we were the last ship to land in Korea and going to the 7th div. My photo which I still have boarding a train my other buddys. Is there an...
More

On 9 November 1861, during the American Civil War
American Civil War
The American Civil War was a civil war fought in the United States of America. In response to the election of Abraham Lincoln as President of the United States, 11 southern slave states declared their secession from the United States and formed the Confederate States of America ; the other 25...
, soldiers of the 11th, 18th, and 29th Illinois
Illinois
Illinois is the fifth-most populous state of the United States of America, and is often noted for being a microcosm of the entire country. With Chicago in the northeast, small industrial cities and great agricultural productivity in central and northern Illinois, and natural resources like coal,...
Regiments set up camp in Bloomfield
Bloomfield, Missouri
Bloomfield is a city in Stoddard County, Missouri, United States. The population was 1,952 at the 2000 census. It is the county seat of Stoddard County.-Geography:Bloomfield is located at...
, Missouri
Missouri
Missouri is a US state located in the Midwestern United States, bordered by Iowa, Illinois, Kentucky, Tennessee, Arkansas, Oklahoma, Kansas and Nebraska. With a 2010 population of 5,988,927, Missouri is the 18th most populous state in the nation and the fifth most populous in the Midwest. It...
. Finding the local newspaper's office empty, they decided to print a newspaper about their activities. They called it the Stars and Stripes. Today, the Stars & Stripes Museum/Library Association is located in Bloomfield.

During World War I
World War I
World War I , which was predominantly called the World War or the Great War from its occurrence until 1939, and the First World War or World War I thereafter, was a major war centred in Europe that began on 28 July 1914 and lasted until 11 November 1918...
, the staff. roving reporters, and illustrators of the Stars and Stripes were veteran reporter or young soldiers who would later become such in the post-war years. Harold Ross
Harold Ross
Harold Wallace Ross was an American journalist and founder of The New Yorker magazine, which he edited from the magazine's inception in 1925 to his death....
, editor of the Stars and Stripes, returned home to found The New Yorker
The New Yorker
The New Yorker is an American magazine of reportage, commentary, criticism, essays, fiction, satire, cartoons and poetry published by Condé Nast...
magazine. Cyrus Baldridge, its art director and principal illustrator, became a major illustrator of books and magazines, as well as a writer, print maker and stage designer. Sports page editor Grantland Rice
Grantland Rice
Grantland Rice was an early 20th century American sportswriter known for his elegant prose. His writing was published in newspapers around the country and broadcast on the radio.-Biography:...
had a long career in journalism and founded a motion picture studio called Grantland Rice Sportlight. Drama critic Alexander Woollcott
Alexander Woollcott
Alexander Humphreys Woollcott was an American critic and commentator for The New Yorker magazine and a member of the Algonquin Round Table....
's essays for Stars and Stripes were collected in his book, The Command Is Forward (1919).

The Stars and Stripes was then an eight-page weekly which reached a peak of 526,000 readers, relying on the improvisational efforts of its staff to get it printed in France and distributed to U.S. troops. 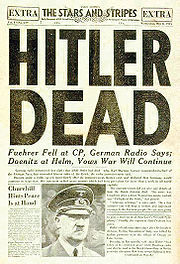 During World War II
World War II
World War II, or the Second World War , was a global conflict lasting from 1939 to 1945, involving most of the world's nations—including all of the great powers—eventually forming two opposing military alliances: the Allies and the Axis...
, the newspaper was printed in dozens of editions in several operating theaters. Again, both newspapermen in uniform and young soldiers, some of whom would later become important journalists, filled the staffs and showed zeal and talent in publishing and delivering the paper on time. Some of the editions were assembled and printed very close to the front
Front (military)
A military front or battlefront is a contested armed frontier between opposing forces. This can be a local or tactical front, or it can range to a theater...
in order to get the latest information to the most troops. Also, during the war, the newspaper published the 53-book series G.I. Stories
G.I. Stories
G.I. Stories was a series of 53 booklets published during World War II by the newspaper Stars and Stripes. The series covered the ground, air, and service forces in the European theater of operations....
.

After Bill Mauldin
Bill Mauldin
William Henry "Bill" Mauldin was a two-time Pulitzer Prize-winning editorial cartoonist from the United States...
did his popular "Willie and Joe" cartoons for the WWII Stars and Stripes, he returned home to a successful career as an editorial cartoonist and two-time winner of the Pulitzer Prize
Pulitzer Prize
The Pulitzer Prize is a U.S. award for achievements in newspaper and online journalism, literature and musical composition. It was established by American publisher Joseph Pulitzer and is administered by Columbia University in New York City...
. Former Stars and Stripes staffers also include 60 Minutes
60 Minutes
60 Minutes is an American television news magazine, which has run on CBS since 1968. The program was created by producer Don Hewitt who set it apart by using a unique style of reporter-centered investigation....
’ Andy Rooney and Steve Kroft
Steve Kroft
Steve Kroft is an American journalist and a longtime correspondent for 60 Minutes. His investigative reporting has garnered him much acclaim, including three Peabody Awards and nine Emmy awards, one of which was an Emmy for Lifetime Achievement.-Early life:Born on August 22, 1945 in Kokomo,...
, songwriter and author Shel Silverstein
Shel Silverstein
Sheldon Allan "Shel" Silverstein , was an American poet, singer-songwriter, musician, composer, cartoonist, screenwriter and author of children's books. He styled himself as Uncle Shelby in his children's books...
, comic book illustrator Tom Sutton
Tom Sutton
Tom Sutton was an American comic book artist who sometimes used the pseudonyms Sean Todd and Dementia...
, painter and cartoonist Paul Fontaine
Paul Fontaine
-Life:Abstract-colorist painter Paul Emile Fontaine was born in 1913 in Worcester, Massachusetts to Elzear and Mary Fontaine, both of French Canadian descent. Fontaine had two brothers, Russell and Leo Fontaine, both younger. Paul Fontaine was early on encouraged to be a painter, deciding to pursue...
, author and television news correspondent Tony Zappone
Tony Zappone
Tony Zappone , became at age 16 the youngest credentialed journalist to lend press coverage to a major national political convention. He was also the youngest contributor of evidence during the Warren Commission hearings into the slaying of President John F. Kennedy...
, cartoonist Vernon Grant
Vernon Grant
Vernon Ethelbert Grant was a cartoonist who did graphic novels, and is also known for his digest-sized comic book series, The Love Rangers...
(A Monster Is Loose in Tokyo), Hollywood photographer Phil Stern
Phil Stern
Phil "Snapdragon" Stern is an award-winning American photographer noted for his iconic portraits of Hollywood stars, as well as his war photography while serving as a U.S. Army Ranger in the "Darby's Rangers" unit in the North African and Italian campaigns during World War II. Settling in Los...
and the late stock market reporter and host of public television's Wall Street Week, Louis Rukeyser
Louis Rukeyser
Louis Richard "Lou" Rukeyser was an American financial journalist, columnist, and commentator, through print, radio, and television....
.

A photograph in Stars and Stripes loosely inspired the exploits of PFC
Private First Class
Private First Class is a military rank held by junior enlisted persons.- Singapore :The rank of Private First Class in the Singapore Armed Forces lies between the ranks of Private and Lance-Corporal . It is usually held by conscript soldiers midway through their national service term...
Jack Agnew
Jack Agnew
Private First Class John J. "Jack" Agnew, USA was a United States Army private first class in World War II, a member of the Filthy Thirteen, whose exploits inspired the novel and movie The Dirty Dozen.-Biography:...
in the 1965 novel and the 1967 film
Film
A film, also called a movie or motion picture, is a series of still or moving images. It is produced by recording photographic images with cameras, or by creating images using animation techniques or visual effects...
, The Dirty Dozen
The Dirty Dozen
The Dirty Dozen is a 1967 film directed by Robert Aldrich and released by MGM. It was filmed in England and features an ensemble cast, including Lee Marvin, Ernest Borgnine, Charles Bronson, Jim Brown, John Cassavetes, Telly Savalas, and Robert Webber. The film is based on E. M...
.

The newspaper has been published continuously in Europe since 1942 and in the Pacific since 1945.

Stars and Stripes is authorized by Congress and the US Department of Defense to produce independent daily military news and information distributed at U.S. military installations in Europe
Europe
Europe is, by convention, one of the world's seven continents. Comprising the westernmost peninsula of Eurasia, Europe is generally 'divided' from Asia to its east by the watershed divides of the Ural and Caucasus Mountains, the Ural River, the Caspian and Black Seas, and the waterways connecting...
and Mideast and East Asia
Asia
Asia is the world's largest and most populous continent, located primarily in the eastern and northern hemispheres. It covers 8.7% of the Earth's total surface area and with approximately 3.879 billion people, it hosts 60% of the world's current human population...
. Stars and Stripes newspaper averages 40–48 pages each day and is published in tabloid format and online. The newspaper employs civilian reporters, and U.S. military senior non-commissioned officers as reporters, at a number of locations around the world and is read by over 350,000 people. Stars and Stripes also serves independent military news and information to an online audience of about 400,000 unique visitors per month, 60 to 70 percent of whom are located in the United States.

Stars and Stripes is a non-appropriated fund (NAF) organization, only partially subsidized by the Department of Defense. A large portion of its operating costs is earned through the sale of advertising and subscriptions. Unique among the many military publications, Stars and Stripes operates as a First Amendment newspaper and is part of the newly formed Defense Media Activity. The other entities encompassed by the Defense Media Activity (the Pentagon Channel and Armed Forces Radio and Television Service, for example), are command publications
Command information newspaper
A command information newspaper is an unofficial written publication directly funded by the United States Department of Defense. It may contain news, information and advertising, and is usually printed on low-cost paper called newsprint. Editorial views expressed in command information newspapers...
of the Department of Defense; only Stars and Stripes maintains complete editorial independence.