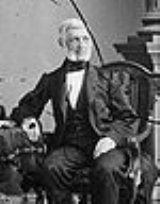 Overview
George Bancroft was an American
United States
The United States of America is a federal constitutional republic comprising fifty states and a federal district...
historian
Historian
A historian is a person who studies and writes about the past and is regarded as an authority on it. Historians are concerned with the continuous, methodical narrative and research of past events as relating to the human race; as well as the study of all history in time. If the individual is...
and statesman
Statesman
A statesman is usually a politician or other notable public figure who has had a long and respected career in politics or government at the national and international level. As a term of respect, it is usually left to supporters or commentators to use the term...
who was prominent in promoting secondary education
Secondary education
Secondary education is the stage of education following primary education. Secondary education includes the final stage of compulsory education and in many countries it is entirely compulsory. The next stage of education is usually college or university...
both in his home state and at the national level. During his tenure as U.S. Secretary of the Navy, he established the United States Naval Academy
United States Naval Academy
The United States Naval Academy is a four-year coeducational federal service academy located in Annapolis, Maryland, United States...
at Annapolis in 1845. Among his best-known writings is the magisterial series, History of the United States, from the Discovery of the American Continent.
His family had been in Massachusetts Bay
Massachusetts Bay
The Massachusetts Bay, also called Mass Bay, is one of the largest bays of the Atlantic Ocean which forms the distinctive shape of the coastline of the U.S. state of Massachusetts. Its waters extend 65 miles into the Atlantic Ocean. Massachusetts Bay includes the Boston Harbor, Dorchester Bay,...
since 1632, and his father, Aaron Bancroft, was distinguished as a revolutionary soldier, a leading Unitarian
Unitarianism
Unitarianism is a Christian theological movement, named for its understanding of God as one person, in direct contrast to Trinitarianism which defines God as three persons coexisting consubstantially as one in being....
clergyman and author of a popular life of George Washington.