Encyclopedia
Georg Lurich was a Estonia
Governorate of Estonia
The Governorate of Estonia or Estland, also known as the Government of Estonia or Province of Estonia, was a governorate of the Russian Empire in what is now northern Estonia.-Historical overview:...
n Greco-Roman wrestler
Greco-Roman wrestling
Greco-Roman wrestling is a style of wrestling that is practised worldwide. It was contested at the first modern Olympic Games in 1896 and has been included in every edition of the summer Olympics held since 1908. Two wrestlers are scored for their performance in three two-minute periods, which can...
and strongman
Strongman (strength athlete)
In the 19th century, the term strongman referred to an exhibitor of strength or circus performers of similar ilk who displayed feats of strength such as the bent press , supporting large amounts of...
of the early 20th century. Lurich was also the trainer of fellow countryman wrestler and weightlifter Georg Hackenschmidt
Georg Hackenschmidt
Georg Karl Julius Hackenschmidt was an early 20th-century Estonian strongman and professional wrestler, and the first free-style heavyweight champion of the world. He launched his professional career in Russia and lived most of his life in London, England, where he gained the nickname of 'The...
and Aleksander Aberg
Aleksander Aberg
Aleksander Richard "Leks" Aberg was a famous Estonian professional Greco-Roman and free-style wrestling World Champion of the early 20th century...
.

Born Georg Luri on 22 April 1876 in the village of Väike-Maarja
Väike-Maarja
Väike-Maarja is a small borough in Lääne-Viru County, Estonia. It is the administrative centre of Väike-Maarja Parish.-Notable people:*Aile Asszonyi , opera singer*Eda-Ines Etti , singer*Vello Jürna , opera singer...
in Lääne-Viru County, Estonia
Estonia
Estonia , officially the Republic of Estonia , is a state in the Baltic region of Northern Europe. It is bordered to the north by the Gulf of Finland, to the west by the Baltic Sea, to the south by Latvia , and to the east by Lake Peipsi and the Russian Federation . Across the Baltic Sea lies...
, he was a son of a shopkeeper named Jüri Luri. Although ethnically Estonian, his family later altered their surname to Lurich after changing religious congregations from a Lutheran
Lutheranism
Lutheranism is a major branch of Western Christianity that identifies with the theology of Martin Luther, a German reformer. Luther's efforts to reform the theology and practice of the church launched the Protestant Reformation...
Estonian congregation to a predominantly ethnic Baltic German
Baltic German
The Baltic Germans were mostly ethnically German inhabitants of the eastern shore of the Baltic Sea, which today form the countries of Estonia and Latvia. The Baltic German population never made up more than 10% of the total. They formed the social, commercial, political and cultural élite in...
congregation. Lurich's family believed members of the German congregation had better possibilities to educate their children in town schools. Lurich began participating in sporting activities at an early age.

After graduating from Peter's Modern School in Tallinn in 1895, he traveled to St. Petersburg, Russia where he practised wightlifting and wrestling under the supervision of the athletics coach Dr. Wladyslaw Krajewski. Lurich performed in St. Petersburg's summer gardens, competed with local wrestlers and made various lifting demonstrations together with fellow strongman Gustav Boesberg. His popularity convinced him to follow a career in as a professional athlete.

Lurich became the first Estonian to set world weightlifting records. The Estonian public eagerly attended his matches and Lurich's popularity in his homeland soared. From 1897 to 1898 Lurich toured Estonia and his successes helped popularize athletics in Estonia and dozens of athletic clubs were established. In 1896, Lurich befriended an 18-year old fellow countryman by the name of Georg Hackenschmidt
Georg Hackenschmidt
Georg Karl Julius Hackenschmidt was an early 20th-century Estonian strongman and professional wrestler, and the first free-style heavyweight champion of the world. He launched his professional career in Russia and lived most of his life in London, England, where he gained the nickname of 'The...
and began to train the young man. Hackenschmidt would later go on to create a name for himself in weightlifting and wrestling.

Lurich's popularity in Estonia also helped galvanize the move toward Estonian independence and instilled a sense of nationalist pride among the people. Estonia was at that time occupied by tsarist Russia, and many higher ranking Estonian officials and intellectuals touted Lurich's accomplishments as proof of the "unbreakable Estonian spirit". 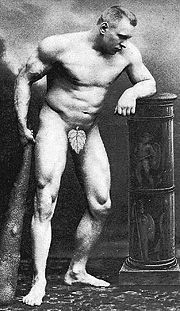 Prior to World War I
World War I
World War I , which was predominantly called the World War or the Great War from its occurrence until 1939, and the First World War or World War I thereafter, was a major war centred in Europe that began on 28 July 1914 and lasted until 11 November 1918...
, Lurich, along with friend and fellow Estonian wrestler Aleksander Aberg
Aleksander Aberg
Aleksander Richard "Leks" Aberg was a famous Estonian professional Greco-Roman and free-style wrestling World Champion of the early 20th century...
travelled to the United States to perform for American audiences. Lurich performed in free-style wrestling matches in the United States of America between 1913 and 1917. Lurich wrestled American world wrestling champion and title holder Frank Gotch
Frank Gotch
Frank Alvin Gotch was an American professional wrestler of German ancestry, the first American to win the world heavyweight free-style championship, and credited for popularizing professional wrestling in the United States...
in Kansas City
Kansas City, Missouri
Kansas City, Missouri is the largest city in the U.S. state of Missouri and is the anchor city of the Kansas City Metropolitan Area, the second largest metropolitan area in Missouri. It encompasses in parts of Jackson, Clay, Cass, and Platte counties...
in 1913, but lost what would be Gotch's final match.

After returning home via Japan, China and Russia in 1917 they arrived in Estonia in the autumn. They participated in a wrestling tournament in the capital city of Tallinn
Tallinn
Tallinn is the capital and largest city of Estonia. It occupies an area of with a population of 414,940. It is situated on the northern coast of the country, on the banks of the Gulf of Finland, south of Helsinki, east of Stockholm and west of Saint Petersburg. Tallinn's Old Town is in the list...
that remained unfinished due to the approach of German troops. The two athletes went to Saint Petersburg
Saint Petersburg
Saint Petersburg is a city and a federal subject of Russia located on the Neva River at the head of the Gulf of Finland on the Baltic Sea...
and on to southern Russia. The Russian Civil War
Russian Civil War
The Russian Civil War was a multi-party war that occurred within the former Russian Empire after the Russian provisional government collapsed to the Soviets, under the domination of the Bolshevik party. Soviet forces first assumed power in Petrograd The Russian Civil War (1917–1923) was a...
meant an end to work in Saint Petersburg and Moscow. It seemed better in the southern region, which was controlled by the White Army
White movement
The White movement and its military arm the White Army - known as the White Guard or the Whites - was a loose confederation of Anti-Communist forces.The movement comprised one of the politico-military Russian forces who fought...
. However, the war spread and the men had to flee further inside Russia. They were halted in a far corner of southern Russia in a village named Armavir and the two men would become stranded in the village. Their initial aim was to leave Russia across the Black Sea
Black Sea
The Black Sea is bounded by Europe, Anatolia and the Caucasus and is ultimately connected to the Atlantic Ocean via the Mediterranean and the Aegean seas and various straits. The Bosphorus strait connects it to the Sea of Marmara, and the strait of the Dardanelles connects that sea to the Aegean...
by boat.

Things took a dramatic turn in Armavir at the beginning of 1920. The front reached them, the town passed from hand to hand in battles several times, many civilians perished, and there were masses of funerals. A warm winter brought about an epidemic of typhoid fever
Typhoid fever
Typhoid fever, also known as Typhoid, is a common worldwide bacterial disease, transmitted by the ingestion of food or water contaminated with the feces of an infected person, which contain the bacterium Salmonella enterica, serovar Typhi...
. Due to the continuing war, medical aid was difficult to obtain. Lurich fell ill first and could not be rescued, dying on January 22, 1920. Aberg had also become infected with typhus, but managed to defeat the illness. Aberg rushed his recovery, caught pneumonia, and died on February 15, 1920. The wrestlers were buried in one grave in Armavir German cemetery.

Following Georg Lurich's death on 20 January 1920 at the age of 43, many Estonians began embellishing his accomplishments with such voracity that Lurich's legend began taking on an almost mythological light. Folk tales abounded in rural Estonia and continue to years after Lurich's death. The following excerpt is an example of a Georg Lurich folk tale that has become popular amongst residents of Väike-Maarja, Estonia and was transcribed by Estonian author Kalle Voolaid:

"One hot and sunny summer day Lurich had been sitting on a hill slope in Väike-Maarja and when the heat was becoming too much for him, he ran down into the valley to freshen himself up with cool spring water. While running he hit his foot against a rock and fell on all fours on the stone. Then he stood up, went to the spring, put his feet and hands in the spring and washed with spring water. That is where he got the great strength, he had taken that rock against which he had hit his foot, and played with it as if it were a potato. That rock is said to be still there on the edge of Väike-Maarja memorial hill, covered with moss."

So impressive to his countrymen, Lurich remains one of the most beloved figures in Estonia to this day. Large tour groups now visit Lurich's memorial stone in Väike-Maarja on Aia Street.