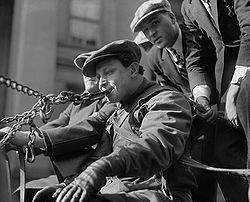 In the 19th century, the term strongman referred to an exhibitor of strength (before strength sports were codified into weightlifting, powerlifting
Powerlifting
Powerlifting is a strength sport. It resembles the sport of Olympic weightlifting, as both disciplines involve lifting weights in three attempts. Powerlifting evolved from a sport known as 'odd lifts' which followed the same three attempt format but used a wide variety of events akin to Strongman...
etc., becoming actual athletic competitions) or circus
Circus
A circus is commonly a travelling company of performers that may include clowns, acrobats, trained animals, trapeze acts, musicians, hoopers, tightrope walkers, jugglers, unicyclists and other stunt-oriented artists...
performers of similar ilk who displayed feats of strength such as the bent press
Bent press
A bent press is a type of weight training exercise wherein a weight is brought from shoulder-level to overhead one-handed using the muscles of the back, legs, and arm. A very large amount of weight can be lifted this way, compared to other types of one-hand press...
(not to be confused with the bench press
Bench press
The bench press is an exercise of the upper body. For bodybuilding purposes, it is used to stimulate the pectorals, deltoids, and triceps. While on his or her back, the person performing the bench press lowers a weight to the level of the chest, then pushes it back up until the arm is straight...
, which did not exist at the time), supporting large amounts of weight held overhead at arm's length, steel bending, chain breaking, etc. Large amounts of wrist, hand, and tendon
Tendon
A tendon is a tough band of fibrous connective tissue that usually connects muscle to bone and is capable of withstanding tension. Tendons are similar to ligaments and fasciae as they are all made of collagen except that ligaments join one bone to another bone, and fasciae connect muscles to other...
strength were required for these feats, as well as prodigious oblique strength.

In the late 20th century the term strongman changed to describe one who competes in strength athletics
Strength athletics
Strength athletics, more generally known as strongman competitions, is a sport which tests competitors' strength in a variety of different ways. Some of the disciplines are similar to those in powerlifting and some powerlifters have also successfully competed in strongman competitions...
- a
more modern eclectic strength competition in which competitors lift rocks, tote refrigerators, pull trains, walk while towing an eighteen wheel truck behind them, etc. The most famous competition of this type is World's Strongest Man
World's Strongest Man
The World's Strongest Man is a well recognised event in strength athletics and has been described by a number of highly respected authorities in the sport as the premier event in strongman. Organized by TWI, an IMG Media company, it is broadcast around the end of December each year...
and the "World's Strongest Man Super Series", however North American Strongman, Inc. (NAS) and the Canadian Federation of Strength Athletes (CFSA) hold amateur and other meets throughout the United States and Canada.

In recent years, interest in the sport at the grassroots level has skyrocketed, leading to the spontaneous formation of local clubs, loosely affiliated with provincial/state and national associations.

Many sports-specific training facilities have begun to incorporate movements associated with strongman competitions into their general training schemes, albeit with lighter weights used; e.g. tire flips, sled drags, object loading or carrying, log pressing, farmer's walks and so on.

Training for strongman involves building overall strength in the gym, and training with competition implements to gain familiarity.
In the gym it is necessary to train the entire body for strength, especially with variants of the squat
Squat (exercise)
In strength training, the squat is a compound, full body exercise that trains primarily the muscles of the thighs, hips and buttocks, quads , hamstrings, as well as strengthening the bones, ligaments and insertion of the tendons throughout the lower body...
, deadlift
Deadlift
The deadlift is a weight training exercise where a loaded barbell is lifted off the ground from a stabilized, bent over position. It is one of the three canonical powerlifting exercises, along with the squat and bench press.-Overview:...
, and overhead press. Also important is explosive power, developed by weightlifting
Powerlifting
Powerlifting is a strength sport. It resembles the sport of Olympic weightlifting, as both disciplines involve lifting weights in three attempts. Powerlifting evolved from a sport known as 'odd lifts' which followed the same three attempt format but used a wide variety of events akin to Strongman...
-style lifts, and cardiovascular conditioning. Grip strength must also be developed. Like any sport, it is necessary to train using the equipment one encounters in the sport. In the case of strongman, these include logs, tires, yokes, farmer's walk implements, etc.; building strength in the gym is insufficient without experience with implements.

Strongman is often incorrectly used to describe a person who does weightlifting or bodybuilding
Bodybuilding
Bodybuilding is a form of body modification involving intensive muscle hypertrophy. An individual who engages in this activity is referred to as a bodybuilder. In competitive and professional bodybuilding, bodybuilders display their physiques to a panel of judges, who assign points based on their...
. This is not exactly true, as neither existed at the time. Interestingly, nineteenth century bodybuilders were expected to mingle with the crowd during intermission and perform strength feats like card tearing, nail bending, etc. to demonstrate strength as well as symmetry and size. Also, many strongmen sold photos of themselves nude or near-nude, flexing and posing. (although what they considered the epitome of male beauty was different from modern ideals - particularly the very low emphasis on chest size, and great emphasis on oblique size, and symmetry.)