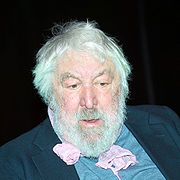 Georg Johannesen was a Norwegian
Norway
Norway , officially the Kingdom of Norway, is a Nordic unitary constitutional monarchy whose territory comprises the western portion of the Scandinavian Peninsula, Jan Mayen, and the Arctic archipelago of Svalbard and Bouvet Island. Norway has a total area of and a population of about 4.9 million...
author
Author
An author is broadly defined as "the person who originates or gives existence to anything" and that authorship determines responsibility for what is created. Narrowly defined, an author is the originator of any written work.-Legal significance:...
and professor of rhetoric
Rhetoric
Rhetoric is the art of discourse, an art that aims to improve the facility of speakers or writers who attempt to inform, persuade, or motivate particular audiences in specific situations. As a subject of formal study and a productive civic practice, rhetoric has played a central role in the Western...
.

He was born in Bergen
Bergen
Bergen is the second largest city in Norway with a population of as of , . Bergen is the administrative centre of Hordaland county. Greater Bergen or Bergen Metropolitan Area as defined by Statistics Norway, has a population of as of , ....
. His dissertation was on the spring motif in the poetry
Poetry
Poetry is a form of literary art in which language is used for its aesthetic and evocative qualities in addition to, or in lieu of, its apparent meaning...
of Olaf Bull
Olaf Bull
Olaf Jacob Martin Luther Breda Bull or Olaf Bull was a Norwegian poet. He was born on November 10, 1883 in Kristiania , Norway, and died on June 29, 1933.-His life:...
. He drowned while on vacation in Egypt
Egypt
Egypt , officially the Arab Republic of Egypt, Arabic: , is a country mainly in North Africa, with the Sinai Peninsula forming a land bridge in Southwest Asia. Egypt is thus a transcontinental country, and a major power in Africa, the Mediterranean Basin, the Middle East and the Muslim world...
.

All his writing shows an interest in the power language
Language
Language may refer either to the specifically human capacity for acquiring and using complex systems of communication, or to a specific instance of such a system of complex communication...
has to enshroud true meaning. The language we use, forces upon us a sentimentality which clouds over real political insight and action, and Johannesen's most important task is to unveil language. Both his plays
Play (theatre)
A play is a form of literature written by a playwright, usually consisting of scripted dialogue between characters, intended for theatrical performance rather than just reading. There are rare dramatists, notably George Bernard Shaw, who have had little preference whether their plays were performed...
and his poems bear obvious inspiration from Bertolt Brecht
Bertolt Brecht
Bertolt Brecht was a German poet, playwright, and theatre director.An influential theatre practitioner of the 20th century, Brecht made equally significant contributions to dramaturgy and theatrical production, the latter particularly through the seismic impact of the tours undertaken by the...
. His essays show a certain fondness for paradox
Paradox
Similar to Circular reasoning, A paradox is a seemingly true statement or group of statements that lead to a contradiction or a situation which seems to defy logic or intuition...
.
The source of this article is wikipedia, the free encyclopedia.  The text of this article is licensed under the GFDL.