Gotland is made up of a sequence of sedimentary rocks of a Silurian
Silurian
The Silurian is a geologic period and system that extends from the end of the Ordovician Period, about 443.7 ± 1.5 Mya , to the beginning of the Devonian Period, about 416.0 ± 2.8 Mya . As with other geologic periods, the rock beds that define the period's start and end are well identified, but the...
age, dipping to the south-east.
The main Silurian succession of limestone
Limestone
Limestone is a sedimentary rock composed largely of the minerals calcite and aragonite, which are different crystal forms of calcium carbonate . Many limestones are composed from skeletal fragments of marine organisms such as coral or foraminifera....
s and shale
Shale
Shale is a fine-grained, clastic sedimentary rock composed of mud that is a mix of flakes of clay minerals and tiny fragments of other minerals, especially quartz and calcite. The ratio of clay to other minerals is variable. Shale is characterized by breaks along thin laminae or parallel layering...
s comprises thirteen units spanning 200-500 m of stratigraphic thickness, being thickest in the south, and overlies a 75-125 m thick Ordovician
Ordovician
The Ordovician is a geologic period and system, the second of six of the Paleozoic Era, and covers the time between 488.3±1.7 to 443.7±1.5 million years ago . It follows the Cambrian Period and is followed by the Silurian Period...
sequence. It was deposited in a shallow, hot and salty sea, on the edge of an equatorial continent. The water depth never exceeded 175–200 m, and shallowed over time as bioherm detritus, and terrestrial sediments, filled the basin. Reef growth started in the Llandovery
Llandovery
Llandovery is a market town in Carmarthenshire, Wales, lying on the River Tywi and the A40 road.The town is served by Llandovery railway station, where there is a park and ride to Llanelli and Shrewsbury via the Heart of Wales Line...
, when the sea was 50–100 m deep, and reefs continued to dominate the sedimentary record. Some sandstones are present in the youngest rocks towards the south of the island, which represent sand bars deposited very close to the shore line.

The lime rocks have been weathered into characteristic karst
KARST
Kilometer-square Area Radio Synthesis Telescope is a Chinese telescope project to which FAST is a forerunner. KARST is a set of large spherical reflectors on karst landforms, which are bowlshaped limestone sinkholes named after the Kras region in Slovenia and Northern Italy. It will consist of...
ic rock formation
Rock formation
This is a list of rock formations that include isolated, scenic, or spectacular surface rock outcrops. These formations are usually the result of weathering and erosion sculpting the existing rock...
s known as rauks. Fossils, mainly of rugose
Rugosa
Disambiguation:The Rugosa Rose is also sometimes just called "Rugosa". For the moon in Star Wars: The Clone Wars, see .The Rugosa, also called the Tetracoralla, are an extinct order of coral that were abundant in Middle Ordovician to Late Permian seas.Solitary rugosans are often referred to...
coral
Coral
Corals are marine animals in class Anthozoa of phylum Cnidaria typically living in compact colonies of many identical individual "polyps". The group includes the important reef builders that inhabit tropical oceans and secrete calcium carbonate to form a hard skeleton.A coral "head" is a colony of...
s and brachiopod
Brachiopod
Brachiopods are a phylum of marine animals that have hard "valves" on the upper and lower surfaces, unlike the left and right arrangement in bivalve molluscs. Brachiopod valves are hinged at the rear end, while the front can be opened for feeding or closed for protection...
s, are abundant throughout the island; palæo-sea-stacks are preserved in places.

The rocks of Gotland display signals of global extinction events, which take their name from parishes on the island: the Ireviken
Ireviken event
The Ireviken event was a minor extinction event at the Llandovery/Wenlock boundary .The event is best recorded at Ireviken, Gotland, where over 50% of trilobite species go extinct; 80% of the global conodont species also become extinct in this interval.-Anatomy of the event:The event lasted around...
, Mulde
Mulde event
The Mulde event was a secundo-secundo event, and marked the second of three relatively minor mass extinctions during the Silurian period. It coincided with a global drop in sea level, and is closely followed by an excursion in geochemical isotopes...
and Lau event
Lau event
The Lau event was the last of three relatively minor mass extinctions during the Silurian period, having a major effect on the conodont fauna...
s. 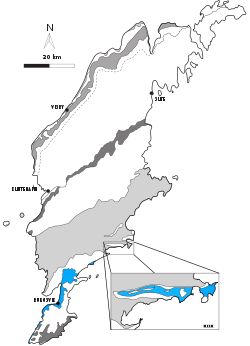 The island is composed of the following formations, listed from youngest to oldest (i.e. from south to north).

After the retreat and thinning of the Baltic Ice Sheet about 14,000 BP the island begun to rise slowly due to post-glacial rebound
Post-glacial rebound
Post-glacial rebound is the rise of land masses that were depressed by the huge weight of ice sheets during the last glacial period, through a process known as isostasy...
. The isostatic effects of the rebound coupled with the Baltic Sea
Baltic Sea
The Baltic Sea is a brackish mediterranean sea located in Northern Europe, from 53°N to 66°N latitude and from 20°E to 26°E longitude. It is bounded by the Scandinavian Peninsula, the mainland of Europe, and the Danish islands. It drains into the Kattegat by way of the Øresund, the Great Belt and...
's changes in sea level created a series of old shorelines and coastal cliffes in Gotland that are now out of the reach of the sea.