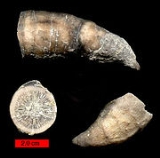 Encyclopedia
Disambiguation:The Rugosa Rose
Rugosa Rose
Rosa rugosa is a species of rose native to eastern Asia, in northeastern China, Japan, Korea and southeastern Siberia, where it grows on the coast, often on sand dunes.-Vernacular names:...
is also sometimes just called "Rugosa". For the moon in Star Wars: The Clone Wars
Star Wars: The Clone Wars (2008 TV series)
-Production:At April 2005's Star Wars Celebration III, Lucas stated that "we are working on a 3-D continuation of the pilot series that was on the Cartoon Network; we probably won't start that project for another year." In July 2005, pre-production had begun on the series, according to Steve...
, see .

The Rugosa, also called the Tetracoralla, are an extinct order
Order (biology)
In scientific classification used in biology, the order is# a taxonomic rank used in the classification of organisms. Other well-known ranks are life, domain, kingdom, phylum, class, family, genus, and species, with order fitting in between class and family...
of coral
Coral
Corals are marine animals in class Anthozoa of phylum Cnidaria typically living in compact colonies of many identical individual "polyps". The group includes the important reef builders that inhabit tropical oceans and secrete calcium carbonate to form a hard skeleton.A coral "head" is a colony of...
that were abundant in Middle Ordovician
Ordovician
The Ordovician is a geologic period and system, the second of six of the Paleozoic Era, and covers the time between 488.3±1.7 to 443.7±1.5 million years ago . It follows the Cambrian Period and is followed by the Silurian Period...
to Late Permian
Permian
The PermianThe term "Permian" was introduced into geology in 1841 by Sir Sir R. I. Murchison, president of the Geological Society of London, who identified typical strata in extensive Russian explorations undertaken with Edouard de Verneuil; Murchison asserted in 1841 that he named his "Permian...
seas.

Solitary rugosans (e.g., Caninia, Lophophyllidium, Neozaphrentis, Streptelasma) are often referred to as horn corals because of a unique horn-shaped chamber with a wrinkled, or rugose, wall. Some solitary rugosans reached nearly a meter in length. However, some species of rugose corals could form large colonies (e.g., Lithostrotion
Lithostrotion
Lithostrotion is a genus of rugose coral which is commonly found as a fossil within Carboniferous Limestone. Lithostrotion is a member of the Lithostrotionidae family within the order Stauriida, class Rugosa in the Cnidaria phylum...
). When radiating septa were present, they were usually in multiples of four, hence Tetracoralla in contrast to modern hexacoralla, colonial polyps generally with six-fold symmetry.

Rugose corals have a skeleton made of calcite
Calcite
Calcite is a carbonate mineral and the most stable polymorph of calcium carbonate . The other polymorphs are the minerals aragonite and vaterite. Aragonite will change to calcite at 380-470°C, and vaterite is even less stable.-Properties:...
that is often fossilized. Like modern corals (Scleractinia
Scleractinia
Scleractinia, also called stony corals, are exclusively marine animals; they are very similar to sea anemones but generate a hard skeleton. They first appeared in the Middle Triassic and replaced tabulate and rugose corals that went extinct at the end of the Permian...
), rugose corals were invariably benthic, living on the sea floor or in a reef-framework. Although there is no direct proof, it is inferred that these Palaeozoic corals possessed stinging cells to capture prey. They also had tentacles to help them catch prey. Technically they were carnivores, but prey-size was so small they are often referred to as microcarnivores.