Encyclopedia
General Atomics is a nuclear physics and defense contractor
Defense contractor
A defense contractor is a business organization or individual that provides products or services to a military department of a government. Products typically include military aircraft, ships, vehicles, weaponry, and electronic systems...
headquartered in San Diego, California
San Diego, California
San Diego is the eighth-largest city in the United States and second-largest city in California. The city is located on the coast of the Pacific Ocean in Southern California, immediately adjacent to the Mexican border. The birthplace of California, San Diego is known for its mild year-round...
. General Atomics’ research into fission
Nuclear fission
In nuclear physics and nuclear chemistry, nuclear fission is a nuclear reaction in which the nucleus of an atom splits into smaller parts , often producing free neutrons and photons , and releasing a tremendous amount of energy...
and fusion
Nuclear fusion
Nuclear fusion is the process by which two or more atomic nuclei join together, or "fuse", to form a single heavier nucleus. This is usually accompanied by the release or absorption of large quantities of energy...
matured into competencies in related technologies, allowing the company to expand into other fields of research. General Atomics develops systems ranging from the nuclear fuel cycle to remotely operated surveillance aircraft, airborne sensors, and advanced electric, electronic, wireless and laser technologies.

General Atomics Aeronautical Systems, Inc. (GA-ASI), an affiliate of General Atomics, provides unmanned aerial vehicles and radar solutions for military and commercial applications worldwide. The company’s Aircraft Systems Group is a designer and manufacturer of unmanned aircraft systems
Unmanned aerial vehicle
An unmanned aerial vehicle , also known as a unmanned aircraft system , remotely piloted aircraft or unmanned aircraft, is a machine which functions either by the remote control of a navigator or pilot or autonomously, that is, as a self-directing entity...
(UAS), including the Predator
RQ-1 Predator
The General Atomics MQ-1 Predator is an unmanned aerial vehicle used primarily by the United States Air Force and Central Intelligence Agency...
, Predator B, Sky Warrior
MQ-1C Warrior
|-See also:-External links:* * * * *...
and Predator C. The Reconnaissance Systems Group designs, manufactures, and integrates the Lynx Synthetic Aperture Radar
Synthetic aperture radar
Synthetic-aperture radar is a form of radar whose defining characteristic is its use of relative motion between an antenna and its target region to provide distinctive long-term coherent-signal variations that are exploited to obtain finer spatial resolution than is possible with conventional...
(SAR)/GMTI radar into both manned and unmanned aircraft, as well as the CLAW sensor control and image analysis software, and integrates sensor and communications equipment into manned ISR
Intelligence, Surveillance and Reconnaissance
Intelligence, Surveillance and Reconnaissance may refer to:*the US Joint Command see Joint Functional Component Command for Intelligence, Surveillance and Reconnaissance.*the military term, see ISTAR....
aircraft. 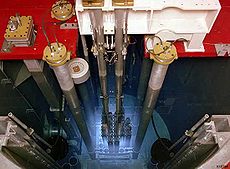 General Atomics (GA) was founded July 18, 1955 in San Diego, California
California
California is a state located on the West Coast of the United States. It is by far the most populous U.S. state, and the third-largest by land area...
as the General Atomic division of General Dynamics
General Dynamics
General Dynamics Corporation is a U.S. defense conglomerate formed by mergers and divestitures, and as of 2008 it is the fifth largest defense contractor in the world. Its headquarters are in West Falls Church , unincorporated Fairfax County, Virginia, in the Falls Church area.The company has...
"for the purpose of harnessing the power of nuclear technologies for the benefit of mankind".

GA's very first offices were in the General Dynamics
General Dynamics
General Dynamics Corporation is a U.S. defense conglomerate formed by mergers and divestitures, and as of 2008 it is the fifth largest defense contractor in the world. Its headquarters are in West Falls Church , unincorporated Fairfax County, Virginia, in the Falls Church area.The company has...
facility on Hancock Street in San Diego. GA also used a schoolhouse on San Diego's Barnard Street as its temporary headquarters, which it would later "adopt" as part of its Education Outreach program. San Diego voters approved the transfer of land to GA for permanent facilities in Torrey Pines
Torrey Pines, San Diego, California
Torrey Pines is a primarily residential community of in the northern coastal area of San Diego, California.- Geography :Torrey Pines is bordered to the north by the city of Del Mar, to the south by La Jolla, to the east by Interstate 5, Carmel Valley, Torrey Hills, the Los Peñasquitos Canyon...
and the John Jay Hopkins
John Jay Hopkins
John Jay Hopkins was founder and president of General Dynamics from 1952 to 1957.Hopkins was born in Santa Ana, California....
Laboratory for Pure and Applied Science was formally dedicated there on June 25, 1959. The Torrey Pines facility continues to serve as the company's headquarters today.

The initial projects were the TRIGA
TRIGA
TRIGA is a class of small nuclear reactor designed and manufactured by General Atomics. The design team for TRIGA was led by the physicist Freeman Dyson.TRIGA is the acronym of Training, Research, Isotopes, General Atomics.-Design:...
nuclear reactor
Nuclear reactor
A nuclear reactor is a device to initiate and control a sustained nuclear chain reaction. Most commonly they are used for generating electricity and for the propulsion of ships. Usually heat from nuclear fission is passed to a working fluid , which runs through turbines that power either ship's...
and Project Orion
Project Orion (nuclear propulsion)
Project Orion was a study of a spacecraft intended to be directly propelled by a series of explosions of atomic bombs behind the craft...
.

General Atomics is also developing a Generation IV reactor
Generation IV reactor
Generation IV reactors are a set of theoretical nuclear reactor designs currently being researched. Most of these designs are generally not expected to be available for commercial construction before 2030...
design, the Gas Turbine Modular Helium Reactor
Gas turbine modular helium reactor
The Gas Turbine Modular Helium Reactor is a nuclear fission power reactor design under development by General Atomics. It is a helium cooled, graphite moderated reactor and uses TRISO fuel compacts in a prismatic core design.-Construction:...
(GT-MHR). In 2010, General Atomics presented a new version of the GT-MHR, the Energy Multiplier Module
Energy Multiplier Module
The Energy Multiplier Module is a nuclear fission power reactor under development by General Atomics. It is a modified version of the Gas Turbine Modular Helium Reactor and is capable of converting spent nuclear fuel into electricity and industrial process heat, without separative or conventional...
(EM2), which uses fast neutrons
Fast neutron reactor
A fast neutron reactor or simply a fast reactor is a category of nuclear reactor in which the fission chain reaction is sustained by fast neutrons...
and is a Gas-cooled fast reactor
Gas-cooled fast reactor
The Gas-Cooled Fast Reactor system is a nuclear reactor design which is currently in development. Classed as a Generation IV reactor, it features a fast-neutron spectrum and closed fuel cycle for efficient conversion of fertile uranium and management of actinides...
.

Since 1992, the General Atomics Science Education Outreach Program, a volunteer effort of GA employees and San Diego science teachers, has worked with Science Coordinators for the San Diego Schools to bring the business and research side of science into the classroom. The goal is both to improve the quality of science education and to encourage more students to pursue science careers. In addition, the teachers' interactions with the scientists and exposure to everyday uses of their disciplines help them to be better educators.

In 1995, the program was expanded, and the General Atomics Sciences Education Foundation [501(c) (3)] was established. The General Atomics Sciences Education Foundation’s goal is to play a major role in enhancing pre-college education in science, engineering and new technologies. To attain this goal, four areas of core competency at General Atomics were initially selected to form the basis for the development of inquiry-based education modules and associated workshops. Scientist/teacher teams wrote these modules, which fuse the content and methodology of industrial research and development with the teaching skills of experienced science teachers.


When these workshops are presented at conferences, the General Atomics Sciences Education Foundation supports the printing of various associated materials that are handed out to all participants, as well as the travel expenses of the General Atomics scientist presenters.

The General Atomics Sciences Education Foundation has supported many local education projects such as the PISCES Project and the San Diego Science Festival
Science festival
A science festival is a public event featuring a variety of science- and technology-related activities—from lectures, exhibitions, workshops, live demonstrations of experiments, guided tours and panel discussions to cultural events such as theater plays, readings and musical productions, all with...
.

General Atomics was the single biggest corporate underwriter of Congressional trips between January 2000 and June 2005, according to a nine-month study of congressional travel disclosure forms. The company spent more than $660,000 on 86 trips taken by members of Congress, their aides and families. Most of that was spent on overseas travel related to the unmanned Predator spy plane made by General Atomics Aeronautical Systems. Since 2005, the Center for Responsible Politics reported General Atomics had spent over $1.5 million per year in lobbying efforts from 2005 to 2011.

The company said it had sponsored travel for members of Congress and their staffs "to promote enhanced understanding of General Atomics' technology research and product development." The company also noted that excursions were reviewed by "the appropriate Congressional ethics committees prior to travel."

In April 2002, for example, the company paid for Letitia White, who was then a top aide to Representative Jerry Lewis
Jerry Lewis (politician)
Charles Jeremy Lewis is the U.S. Representative for , and previously the 40th, 35th and 37th, serving since 2003. He is a member of the Republican Party. He is a former chairman of the House Appropriations Committee, serving in the role during the 109th Congress.-Early life, education, and...
, and her husband to travel to Italy. White left Lewis' office nine months later, to become a lobbyist at Copeland Lowery. The next day, she began representing General Atomics. Lewis, her former boss, was at the time chairman of the House Defense Appropriations subcommittee.