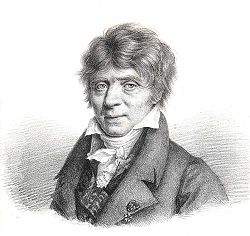 Gaspard Clair François Marie Riche de Prony (July 22, 1755 - July 29, 1839) was a French
France
The French Republic , The French Republic , The French Republic , (commonly known as France , is a unitary semi-presidential republic in Western Europe with several overseas territories and islands located on other continents and in the Indian, Pacific, and Atlantic oceans. Metropolitan France...
mathematician
Mathematician
A mathematician is a person whose primary area of study is the field of mathematics. Mathematicians are concerned with quantity, structure, space, and change....
and engineer
Engineer
An engineer is a professional practitioner of engineering, concerned with applying scientific knowledge, mathematics and ingenuity to develop solutions for technical problems. Engineers design materials, structures, machines and systems while considering the limitations imposed by practicality,...
, who worked on hydraulics
Hydraulics
Hydraulics is a topic in applied science and engineering dealing with the mechanical properties of liquids. Fluid mechanics provides the theoretical foundation for hydraulics, which focuses on the engineering uses of fluid properties. In fluid power, hydraulics is used for the generation, control,...
. He was born at Chamelet
Chamelet
Chamelet is a commune in the Rhône department in eastern France....
, Beaujolais
Beaujolais
Beaujolais is a French Appellation d'Origine Contrôlée wine generally made of the Gamay grape which has a thin skin and is low in tannins. Like most AOC wines they are not labeled varietally. Whites from the region, which make up only 1% of its production, are made mostly with Chardonnay grapes...
, France
Kingdom of France
The Kingdom of France was one of the most powerful states to exist in Europe during the second millennium.It originated from the Western portion of the Frankish empire, and consolidated significant power and influence over the next thousand years. Louis XIV, also known as the Sun King, developed a...
and died in Asnières-sur-Seine
Asnières-sur-Seine
Asnières-sur-Seine is a commune in the northwestern suburbs of Paris, France, along the river Seine. It is located from the center of Paris.-Name:...
, France
July Monarchy
The July Monarchy , officially the Kingdom of France , was a period of liberal constitutional monarchy in France under King Louis-Philippe starting with the July Revolution of 1830 and ending with the Revolution of 1848...
.


The trigonometric and logarithmic tables of the cadastre

In 1793, de Prony began a major task of producing logarithm
Logarithm
The logarithm of a number is the exponent by which another fixed value, the base, has to be raised to produce that number. For example, the logarithm of 1000 to base 10 is 3, because 1000 is 10 to the power 3: More generally, if x = by, then y is the logarithm of x to base b, and is written...
ic and trigonometric tables for the French Cadastre. The effort was begun at the request of the French National Assembly
French National Assembly
The French National Assembly is the lower house of the bicameral Parliament of France under the Fifth Republic. The upper house is the Senate ....
, which, after the French Revolution
French Revolution
The French Revolution , sometimes distinguished as the 'Great French Revolution' , was a period of radical social and political upheaval in France and Europe. The absolute monarchy that had ruled France for centuries collapsed in three years...
wanted to bring uniformity to the multiple measurements and standards used throughout the nation. The tables and their production were vast, with values calculated to between fourteen and twenty-nine decimal places. Inspired by Adam Smith
Adam Smith
Adam Smith was a Scottish social philosopher and a pioneer of political economy. One of the key figures of the Scottish Enlightenment, Smith is the author of The Theory of Moral Sentiments and An Inquiry into the Nature and Causes of the Wealth of Nations...
's Wealth of Nations, de Prony divided up the labor, bragging that he "could manufacture logarithms as easily as one manufactures pins." At the top of the organizational hierarchy were scientists and mathematicians who devised the formulas. Next were workers who created the instructions for doing the calculations. At the bottom were about ninety "computers" (as they were called) who were not trained in mathematics, but who followed the instructions."

Getting such a massive work published proved to be difficult and in fact the tables were never published in full, as a consequence of the loss of value of paper money during the French Revolution. Only in 1891 was an excerpt of the table published.

One of de Prony's important scientific inventions was the 'de Prony brake
De Prony brake
The de Prony Brake is a simple device invented by Gaspard de Prony to measure the torque produced by an engine. The term "brake horsepower" is one measurement of power derived from this method of measuring torque...
' which he invented in 1821 to measure the performance of machines and engines. He also was first to propose using a reversible pendulum to measure gravity, which was independently invented in 1817 by Henry Kater
Henry Kater
Henry Kater was an English physicist of German descent.-Early life:He was born at Bristol. At first he intended to study law; but he gave up the idea on his father's death in 1794. He entered the army, obtaining a commission in the 12th Regiment of Foot, then stationed in India, where he assisted...
and became known as the Kater's pendulum
Kater's pendulum
A Kater's pendulum is a reversible freeswinging pendulum invented by British physicist and army captain Henry Kater in 1817 for use as a gravimeter instrument to measure the local acceleration of gravity. Its advantage is that, unlike previous pendulum gravimetry methods, the pendulum's centre of...
.

He also created a method of converting sinusoidal and exponential curves into a systems of linear equations. Prony estimation is used extensively in signal processing and finite element modelling of non linear materials.