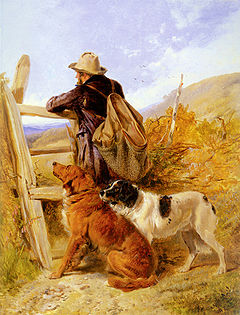 A gamekeeper (often abbreviated to keeper) is a person who manages an area of countryside to make sure there is enough game
Game (food)
Game is any animal hunted for food or not normally domesticated. Game animals are also hunted for sport.The type and range of animals hunted for food varies in different parts of the world. This will be influenced by climate, animal diversity, local taste and locally accepted view about what can or...
for shooting, or fish for angling, and who actively manages areas of woodland
Woodland
Ecologically, a woodland is a low-density forest forming open habitats with plenty of sunlight and limited shade. Woodlands may support an understory of shrubs and herbaceous plants including grasses. Woodland may form a transition to shrubland under drier conditions or during early stages of...
, moorland
Moorland
Moorland or moor is a type of habitat, in the temperate grasslands, savannas, and shrublands biome, found in upland areas, characterised by low-growing vegetation on acidic soils and heavy fog...
, waterway
Waterway
A waterway is any navigable body of water. Waterways can include rivers, lakes, seas, oceans, and canals. In order for a waterway to be navigable, it must meet several criteria:...
or farmland for the benefit of game birds, deer
Deer
Deer are the ruminant mammals forming the family Cervidae. Species in the Cervidae family include white-tailed deer, elk, moose, red deer, reindeer, fallow deer, roe deer and chital. Male deer of all species and female reindeer grow and shed new antlers each year...
, fish and wildlife
Wildlife
Wildlife includes all non-domesticated plants, animals and other organisms. Domesticating wild plant and animal species for human benefit has occurred many times all over the planet, and has a major impact on the environment, both positive and negative....
in general.

Typically, a gamekeeper is employed by a landowner, and often in the UK by a country estate
Estate (house)
An estate comprises the houses and outbuildings and supporting farmland and woods that surround the gardens and grounds of a very large property, such as a country house or mansion. It is the modern term for a manor, but lacks the latter's now abolished jurisdictional authority...
, to prevent poaching
Poaching
Poaching is the illegal taking of wild plants or animals contrary to local and international conservation and wildlife management laws. Violations of hunting laws and regulations are normally punishable by law and, collectively, such violations are known as poaching.It may be illegal and in...
, to rear and release game birds such as pheasant
Common Pheasant
The Common Pheasant , is a bird in the pheasant family . It is native to Georgia and has been widely introduced elsewhere as a game bird. In parts of its range, namely in places where none of its relatives occur such as in Europe , it is simply known as the "pheasant"...
s and partridge,eradicate pests, encourage and manage wild red grouse, and to control predators such as fox
Red Fox
The red fox is the largest of the true foxes, as well as being the most geographically spread member of the Carnivora, being distributed across the entire northern hemisphere from the Arctic Circle to North Africa, Central America, and the steppes of Asia...
es, to manage habitats to suit game, and to monitor the health of the game.

Today, some five thousand full-time gamekeepers are employed in the UK, compared to as many as 10,000 at the beginning of the 20th century. In addition, there are many people who spend their leisure time and money rearing game and maintaining habitats on their own small shoots. There are several variations in gamekeeping:

The League Against Cruel Sports
League Against Cruel Sports
The League Against Cruel Sports are an animal welfare organisation that campaigns against all blood sports including bull fighting, fox hunting and hare coursing. It also campaigns to ban the manufacture, sale and use of snares, for the regulation of greyhound racing and for an end to commercial...
estimates some 12,300 wild mammals and birds are killed on UK shooting estates every day and sees gamekeepers as playing a key role in the destruction of wildlife. On the other hand, the shooting industry says that gamekeepers are vital wildlife conservation
Wildlife conservation
Wildlife conservation is the preservation, protection, or restoration of wildlife and their environment, especially in relation to endangered and vulnerable species. All living non-domesticated animals, even if bred, hatched or born in captivity, are considered wild animals. Wildlife represents all...
workers in the countryside. The National Gamekeeper's Organisation (NGO) claims that nine times as much of the British countryside is looked after by gamekeepers as is in nature reserves and National Parks.

The Royal Society for the Protection of Birds
Royal Society for the Protection of Birds
Bird Notes and News was first published in April 1903.The title changed to 'Bird Notes' in 1947. In the 1950s, there were four copies per year . Each volume covered two years, spread over three calendar years...
has criticised the poisoning of birds of prey on some shooting estates. This is probably the most controversial of all topics surrounding the gamekeeper. However, this is now much rarer than in its heyday, due to better knowledge of the ecology
Ecology
Ecology is the scientific study of the relations that living organisms have with respect to each other and their natural environment. Variables of interest to ecologists include the composition, distribution, amount , number, and changing states of organisms within and among ecosystems...
of birds of prey, and cases are generally condemned by the shooting community.

In 1997, as a result of months of adverse media criticism of gamekeepers, the Scottish Gamekeepers Association (SGA) was formed with a goal of promoting the work of gamekeepers and developing training in the area of law and best practices in the field of game management. The SGA chairman is Alex Hogg, a gamekeeper from Scotland .

In the same year http://www.nationalgamekeepers.org.uk The National Gamekeepers Organisation (NGO)was set up for the same reasons and in addition they felt that the main shooting Association was not representing the keepers properly. The NGO now has some 15,000 members.

The NGO run industry based training for keepers and were the first organisation to react to EU legislation with regards to game meat hygiene producing a course for experienced keepers & stalkers which had approval from the Food Standard Agency.

The NGO continue to promote gamekeeping, stalking, shooting and fishing. Its chairman is Lindsay Waddell, a gamekeeper from
Co. Durham.

Some colleges in the UK now offer courses in gamekeeping up to and including diploma level. One of these is the Northern School of Game and Wildlife at Newton Rigg, Cumbria
Cumbria
Cumbria , is a non-metropolitan county in North West England. The county and Cumbria County Council, its local authority, came into existence in 1974 after the passage of the Local Government Act 1972. Cumbria's largest settlement and county town is Carlisle. It consists of six districts, and in...
, England
England
England is a country that is part of the United Kingdom. It shares land borders with Scotland to the north and Wales to the west; the Irish Sea is to the north west, the Celtic Sea to the south west, with the North Sea to the east and the English Channel to the south separating it from continental...
.

Elmwood College
Elmwood College
Elmwood College is located in Cupar, Fife, Scotland. Elmwood College was officially declared open in 1972, after a few years of holding classes on borrowed premises. The college had started classes about twenty years earlier. There are full-time as well as part-time courses, work based courses, and...
in Cupar
Cupar
Cupar is a town and former royal burgh in Fife, Scotland. The town is situated between Dundee and the New Town of Glenrothes.According to a recent population estimate , Cupar had a population around 8,980 making the town the ninth largest settlement in Fife.-History:The town is believed to have...
, Fife
Fife
Fife is a council area and former county of Scotland. It is situated between the Firth of Tay and the Firth of Forth, with inland boundaries to Perth and Kinross and Clackmannanshire...
is Scotland
Scotland
Scotland is a country that is part of the United Kingdom. Occupying the northern third of the island of Great Britain, it shares a border with England to the south and is bounded by the North Sea to the east, the Atlantic Ocean to the north and west, and the North Channel and Irish Sea to the...
's main gamekeeping college.