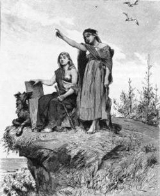 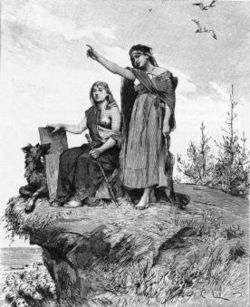 Galdr is one Old Norse
Old Norse
Old Norse is a North Germanic language that was spoken by inhabitants of Scandinavia and inhabitants of their overseas settlements during the Viking Age, until about 1300....
word for "spell, incantation
Incantation
An incantation or enchantment is a charm or spell created using words. An incantation may take place during a ritual, either a hymn or prayer, and may invoke or praise a deity. In magic, occultism, witchcraft it may be used with the intention of casting a spell on an object or a person...
", and which was usually performed in combination with certain rites. It was mastered by both women and men and they chanted it in falsetto
Falsetto
Falsetto is the vocal register occupying the frequency range just above the modal voice register and overlapping with it by approximately one octave. It is produced by the vibration of the ligamentous edges of the vocal folds, in whole or in part...
(gala).

The Old English
Old English language
Old English or Anglo-Saxon is an early form of the English language that was spoken and written by the Anglo-Saxons and their descendants in parts of what are now England and southeastern Scotland between at least the mid-5th century and the mid-12th century...
forms were gealdor, galdor, ȝaldre "spell, enchantment, witchcraft", and the verb galan meant "sing, chant". It is contained in nightingale
Nightingale
The Nightingale , also known as Rufous and Common Nightingale, is a small passerine bird that was formerly classed as a member of the thrush family Turdidae, but is now more generally considered to be an Old World flycatcher, Muscicapidae...
(from næcti-galæ), related to giellan, the verb ancestral to Modern English yell; cf. also the Icelandic verb að gala "to sing, call out, yell". In Dutch language
Dutch language
Dutch is a West Germanic language and the native language of the majority of the population of the Netherlands, Belgium, and Suriname, the three member states of the Dutch Language Union. Most speakers live in the European Union, where it is a first language for about 23 million and a second...
gillen.

The incantations were composed in a special meter named galdralag. This meter was similar to the six-lined ljóðaháttr but adds a seventh line. Another characteristic is a performed parallelism, see the stanza from Skirnismál
Skírnismál
Skírnismál is one of the poems of the Poetic Edda. It is preserved in the 13th century manuscripts Codex Regius and AM 748 I 4to but may have been originally composed in heathen times...
, below.