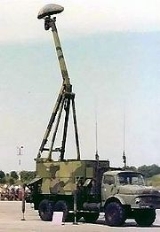 Encyclopedia
The Saab
Saab
Saab AB is a Swedish aerospace and defence company, founded in 1937. From 1947 to 1990 it was the parent company of automobile manufacturer Saab Automobile, and between 1968 and 1995 the company was in a merger with commercial vehicle manufacturer Scania, known as Saab-Scania.-History:"Svenska...
(formerly Ericsson
Ericsson
Ericsson , one of Sweden's largest companies, is a provider of telecommunication and data communication systems, and related services, covering a range of technologies, including especially mobile networks...
Microwave Systems AB) GIRAFFE Radar is a family of land and naval two- or three-dimensional G/H-band (4 to 8 GHz) radar
Radar
Radar is an object-detection system which uses radio waves to determine the range, altitude, direction, or speed of objects. It can be used to detect aircraft, ships, spacecraft, guided missiles, motor vehicles, weather formations, and terrain. The radar dish or antenna transmits pulses of radio...
-based surveillance and air defense command and control systems tailored for operations with medium- and Short Range Air Defense
Short Range Air Defense
Short Range Air Defense is a term used to describe a group of anti-aircraft weapons and tactics that have to do with defense against low-altitude air threats, primarily helicopters and low-flying close air support aircraft such as the A-10 or MiG-27...
(SHORAD) missile or gun systems or for use as gap-fillers in a larger air defense system. The radar gets its name from the distinctive folding mast which when deployed allows the radar to see over nearby terrain features such as trees, extending its effective range against low-level air targets. The first systems were produced in 1977. By 2007, some 450 units of all types are reported as having been delivered.

GIRAFFE uses Agile Multi-Beam (AMB), which includes an integrated Command, control and communication (C3) system. This enables GIRAFFE to act as the command and control center in an air defense system, it can also be integrated into a sensor net for greater coverage. It is normally housed in a single 6m long shelter mounted on an all-terrain vehicle for high mobility. Additionally the shelter can be augmented with Nuclear, Biological and Chemical
Weapons of mass destruction
A weapon of mass destruction is a weapon that can kill and bring significant harm to a large number of humans and/or cause great damage to man-made structures , natural structures , or the biosphere in general...
protection and light layers of armor to protect against small arms
Small arms
Small arms is a term of art used by armed forces to denote infantry weapons an individual soldier may carry. The description is usually limited to revolvers, pistols, submachine guns, carbines, assault rifles, battle rifles, multiple barrel firearms, sniper rifles, squad automatic weapons, light...
and fragmentation
Fragmentation (weaponry)
Fragmentation is the process by which the casing of an artillery shell, bomb, grenade, etc. is shattered by the detonating high explosive filling. The correct technical terminology for these casing pieces is fragments , although shards or splinters can be used for non-preformed fragments...
threats.

Giraffe 40
This is a short-range (40 kilometres (24.9 mi) instrumented) air defense radar with command and control capability. It employs a folding antenna mast that extends to a height of 13 metres (42.7 ft) when deployed and can be integrated with an Interogation Friend or Foe (IFF) capability. Coverage is stated to be from ground level to 10000 metres (32,808.4 ft) in altitude. In Swedish service the radar is designated PS-70 and PS-701 and provides target data to RBS-70 SHORADS missiles and 40mm Bofors guns. A more powerful version with a 60 kW transmitter is known commercially as Super Giraffe and in Swedish service as PS-707. These radars are no longer marketed.

Giraffe 50AT
This is the model used in the Norwegian NALLADS air defense system which combines the radar and RBS-70 missiles with 20 mm
20 mm caliber
The 20 mm caliber is a specific size of cannon or autocannon ammunition, commonly the smallest caliber which is unambiguously a cannon and not a heavy machine gun....
anti-aircraft guns to provide low-level air defense for the combat brigades of the Norwegian army. Mounted on a BV-202 all-terrain tracked vehicle this version has an instrumented range of 50 km (31.1 mi). The antenna extends to a height of 7 metres (23 ft) and the system can control up to 20 firing units of guns or missiles or a combination of both. The Command and Control system features fully automatic track initiation, target tracking, target identification (IFF), target classification and designation, hovering helicopter detection threat evaluation and handling of "pop-up" targets. It can also exchange data with Giraffe 75 or AMB systems as part of a larger network.

Giraffe 75
This features a 13 metres (42.7 ft) antenna mast and is normally carried on a 6x6 5-ton cross-country truck which carries the radar and command and control shelter. Instrumented range is 75 km (46.6 mi) and altitude coverage extends from ground-level to 10000 metres (32,808.4 ft). An optional add-on unit extends the radars coastal defense capabilities. In Swedish service the radar is designated PS-90. In the Greek Air Force Giraffe 75 is used in combination with Contraves (now Rheinmetall defense) Skyguard/Sparrow fire control systems. 1 Giraffe typically controls 2 Skyguard systems each with 2 twin 35 mm GDF-005 guns
Oerlikon 35 mm twin cannon
The Oerlikon 35 mm twin cannon is a towed anti-aircraft gun made by Oerlikon Contraves . The system was originally designated as 2 ZLA/353 ML but this was later changed to GDF-001...
and 2 Sparrow surface-to-air missile launchers. 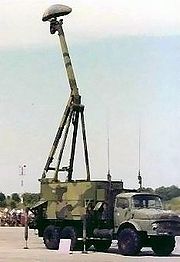 Giraffe S
Optimized as a mobile radar for un-manned remote-controlled applications as a "gap-filler" in air defense early warning systems concentrating on small, low-flying targets over a long distance. It can also be employed as a coastal surveillance radar where targets are small surface vessels and sea-skimming missiles or aircraft
Aircraft
An aircraft is a vehicle that is able to fly by gaining support from the air, or, in general, the atmosphere of a planet. An aircraft counters the force of gravity by using either static lift or by using the dynamic lift of an airfoil, or in a few cases the downward thrust from jet engines.Although...
. A new antenna extends range coverage to 180 km (111.8 mi) with altitude coverage from ground level to 6000 metres (19,685 ft). The antenna mast extends to 8 metres (26.2 ft).

ARTE 740
This is a coastal defense radar based on the Giraffe 75 antenna and Giraffe AMB processing system optimized for surface and low-altitude coverage for the Swedish Amphibious Forces (formerly the Coastal Artillery). It is mounted on a MOWAG Piranha
Mowag Piranha
The MOWAG Piranha is a family of armoured fighting vehicles designed by the Swiss MOWAG , corporation....
10x10 armored vehicle. 6 systems are in service.

GIRAFFE AMB
This newest member of the family, providing multi-beam 3-Dimensional air coverage at 5.4 to 5.9 GHz with instrumented ranges of 30 km (18.6 mi), 60 km (37.3 mi) and 100 km (62.1 mi), the altitude coverage is extended from ground-level to 20000 metres (65,616.8 ft) with 70-degree elevation coverage. Data rate is 1-scan per-second. Its maintained pulse density suppresses high cluttering in adverse weather conditions. Ultra-low antenna side-lobes combined with pulse-to-pulse and burst-to-burst frequency agility provides some resistance to jamming. As in previous Giraffe radars automatic hovering helicopter detection is provided as is an artillery and mortar locating function, allowing the radar to detect incoming rounds and give 20 seconds or more of warning before impact. Giraffe AMB is the principal sensor of the Swedish RBS 23
RBS 23
The RBS 23, designated BAMSE, is a Swedish medium range, all-weather capable air defense system developed by Bofors and Ericsson . BAMSE is designed for protection of military facilities, ground forces and high value infrastructures...
BAMSE air defense missile system but is available for many other applications. A skilled crew can deploy the radar in around 10 minutes and recover it in around 6 minutes.

Sea GIRAFFE
Sea GIRAFFE is the naval variant of the GIRAFFE radar with AMB technology. It can detect air and surface targets from the horizon up to a height of 20000 metres (65,616.8 ft) at elevations up to 70º, and can simultaneously handle multiple threats approaching from different directions and altitudes, including diving anti-ship missiles. Also, it is specialized for rapidly detecting small, fast moving targets at all altitudes and small surface targets in severe clutter. Its roles include :

: Sea GIRAFFE installed on Anzac-class frigates. Recently ordered as a ground-based system, too.: In use by the Marine Corps since 1989, in the 50AT version, with a BV-206D tractor. To be replaced by the Saber M60.: Sea GIRAFFE is used on Halifax class frigates.