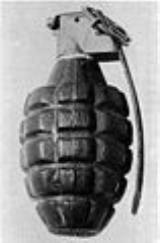 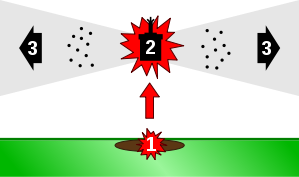 Fragmentation is the process by which the casing of an artillery
Artillery
Originally applied to any group of infantry primarily armed with projectile weapons, artillery has over time become limited in meaning to refer only to those engines of war that operate by projection of munitions far beyond the range of effect of personal weapons...
shell
Shell (projectile)
A shell is a payload-carrying projectile, which, as opposed to shot, contains an explosive or other filling, though modern usage sometimes includes large solid projectiles properly termed shot . Solid shot may contain a pyrotechnic compound if a tracer or spotting charge is used...
, bomb
Bomb
A bomb is any of a range of explosive weapons that only rely on the exothermic reaction of an explosive material to provide an extremely sudden and violent release of energy...
, grenade
Grenade
A grenade is a small explosive device that is projected a safe distance away by its user. Soldiers called grenadiers specialize in the use of grenades. The term hand grenade refers any grenade designed to be hand thrown. Grenade Launchers are firearms designed to fire explosive projectile grenades...
, etc. is shattered by the detonating high explosive (HE) filling. The correct technical terminology
Technical terminology
Technical terminology is the specialized vocabulary of any field, not just technical fields. The same is true of the synonyms technical terms, terms of art, shop talk and words of art, which do not necessarily refer to technology or art...
for these casing pieces is fragments (sometimes shortened to frags), although shards or splinters can be used for non-preformed fragments. The fragments can also be preformed and of various shapes (spheres, cubes, etc.) and sizes. Preformed fragments are normally held rigidly within some form of matrix or body until the HE filling is detonated. The resulting high velocity fragments produced by either method are the main lethal mechanisms of these weapons, rather than the heat
Heat
In physics and thermodynamics, heat is energy transferred from one body, region, or thermodynamic system to another due to thermal contact or thermal radiation when the systems are at different temperatures. It is often described as one of the fundamental processes of energy transfer between...
or overpressure
Overpressure
The term Overpressure is applied to a pressure difference, relative to a "normal" or "ambient" pressure, in various circumstances:* In engineering: the pressure difference over the wall thickness of a pressure vessel...
caused by detonation.


Difference between fragmentation and shrapnel

The term shrapnel is often incorrectly used to refer to fragments produced by any explosive weapon. However, a shrapnel shell functions differently than a high explosive shell. A shrapnel shell consists of a shell casing filled with steel or lead balls, with a small explosive charge at the base of the shell and a nose fuse
Fuse
The word fuse has several meanings:* Fuse , a device used in electrical systems to protect against excessive current....
. When the projectile is fired, it travels a pre-set distance before the fuse ignites the explosive charge (often black powder
Gunpowder
Gunpowder, also known since in the late 19th century as black powder, was the first chemical explosive and the only one known until the mid 1800s. It is a mixture of sulfur, charcoal, and potassium nitrate - with the sulfur and charcoal acting as fuels, while the saltpeter works as an oxidizer...
) in the base of the shell. The fuse also typically fractures the nose of the shell to open a path for the balls. Upon ignition, the explosive charge shoots the balls from the shell in a forward cone. The casing of a shrapnel shell does not fragment like a high explosive shell, thus, technically, the balls shot from the shrapnel shell are "shrapnel" whereas the pieces of shattered shell casing of a high explosive shell are "fragments" or "splinters."

Another artillery round similar to shrapnel is canister
Canister
The term canister comes from Latin or Greek . It means:* Originally, from Greek καννα , a basket of woven reeds...
, sometimes called case shot. Canister is a simple sheet metal casing filled with steel or lead balls. Upon firing, the casing fractures as it exits the muzzle of the gun and dispenses the balls from the gun’s muzzle much like a shotgun
Shotgun
A shotgun is a firearm that is usually designed to be fired from the shoulder, which uses the energy of a fixed shell to fire a number of small spherical pellets called shot, or a solid projectile called a slug...
. The practical differences between canister and shrapnel is that canister is only effective at short range (less than 200 yards/183m), whereas a shrapnel shell can travel hundreds of meters downrange before the fuse activates the explosive charge, thus it can be effective at much longer ranges.
The source of this article is wikipedia, the free encyclopedia.  The text of this article is licensed under the GFDL.