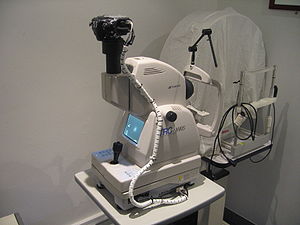 A fundus camera or retinal camera is a specialized low power microscope
Microscope
A microscope is an instrument used to see objects that are too small for the naked eye. The science of investigating small objects using such an instrument is called microscopy...
with an attached camera
Camera
A camera is a device that records and stores images. These images may be still photographs or moving images such as videos or movies. The term camera comes from the camera obscura , an early mechanism for projecting images...
designed to photograph
Photograph
A photograph is an image created by light falling on a light-sensitive surface, usually photographic film or an electronic imager such as a CCD or a CMOS chip. Most photographs are created using a camera, which uses a lens to focus the scene's visible wavelengths of light into a reproduction of...
the interior surface of the eye
Human eye
The human eye is an organ which reacts to light for several purposes. As a conscious sense organ, the eye allows vision. Rod and cone cells in the retina allow conscious light perception and vision including color differentiation and the perception of depth...
, including the retina
Retina
The vertebrate retina is a light-sensitive tissue lining the inner surface of the eye. The optics of the eye create an image of the visual world on the retina, which serves much the same function as the film in a camera. Light striking the retina initiates a cascade of chemical and electrical...
, optic disc
Optic disc
The optic disc or optic nerve head is the location where ganglion cell axons exit the eye to form the optic nerve. There are no light sensitive rods or cones to respond to a light stimulus at this point. This causes a break in the visual field called "the blind spot" or the "physiological blind spot"...
, macula
Macula
The macula or macula lutea is an oval-shaped highly pigmented yellow spot near the center of the retina of the human eye. It has a diameter of around 5 mm and is often histologically defined as having two or more layers of ganglion cells...
, and posterior pole
Posterior pole
In ophthalmology, the posterior pole is the back of the eye, usually referring to the retina between the optic disc and the macula....
(i.e. the fundus
Fundus (eye)
The fundus of the eye is the interior surface of the eye, opposite the lens, and includes the retina, optic disc, macula and fovea, and posterior pole. The fundus can be viewed with an ophthalmoscope. The term may also be inclusive of Bruch's membrane and the choroid.The color of the fundus varies...
).

The optical design of fundus cameras is based on the principle of monocular indirect ophthalmoscopy. A fundus camera provides an upright, magnified view of the fundus. A typical camera views 30 to 50 degrees of retinal area, with a magnification of 2.5x, and allows some modification of this relationship through zoom or auxiliary lenses from 15 degrees which provides 5x magnification to 140 degrees with a wide angle lens which minifies the image by half. The optics of a fundus camera are similar to those of an indirect ophthalmoscope in that the observation and illumination systems follow dissimilar paths. The observation light is focused via a series of lenses through a doughnut shaped aperture, which then passes through a central aperture to form an annulus, before passing through the camera objective lens and through the cornea onto the retina. The light reflected from the retina passes through the un-illuminated hole in the doughnut formed by the illumination system. As the light paths of the two systems are independent, there are minimal reflections of the light source captured in the formed image. The image forming rays continue towards the low powered telescopic eyepiece. When the button is pressed to take a picture, a mirror interrupts the path of the illumination system allow the light from the flash bulb to pass into the eye. Simultaneously, a mirror falls in front of the observation telescope, which redirects the light onto the capturing medium, whether it is film or a digital CCD
Charge-coupled device
A charge-coupled device is a device for the movement of electrical charge, usually from within the device to an area where the charge can be manipulated, for example conversion into a digital value. This is achieved by "shifting" the signals between stages within the device one at a time...
. Because of the eye’s tendency to accommodate
Accommodation (eye)
Accommodation is the process by which the vertebrate eye changes optical power to maintain a clear image on an object as its distance changes....
while looking though a telescope, it is imperative that the exiting vergence
Vergence
A vergence is the simultaneous movement of both eyes in opposite directions to obtain or maintain single binocular vision..When a creature with binocular vision looks at an object, the eyes must rotate around a vertical axis so that the projection of the image is in the centre of the retina in both...
is parallel in order for an in focus image to be formed on the capturing medium.

Since the instruments are complex in design and difficult to manufacture to clinical standards, only a few manufacturers exist: Topcon
Topcon
Topcon is a Japanese manufacturer of optical equipment for ophthalmology and surveying. Their headquarters are in Itabashi, Tokyo. They are affiliated with Toshiba, which holds 40% of Topcon's stock.-History of Topcon:...
, Zeiss
Carl Zeiss Meditec
Carl Zeiss Meditec AG is a multinational medical technology company. It manufactures tools for eye examinations and medical lasers as well as solutions for neurosurgery, dentistry, gynecology and oncology. Among its products are the most common tools used by ophthalmologists and optometrists.Carl...
, Canon, Nidek, and Kowa
Kowa
Kōwa was a Japanese era name of the Southern Court during the Era of Northern and Southern Courts after Tenju and before Genchū. This period spanned the years from February 1381 to April 1384. The Southern Court emperors in Yoshino during this time-frame were and...
.