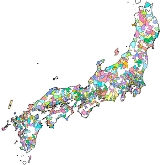 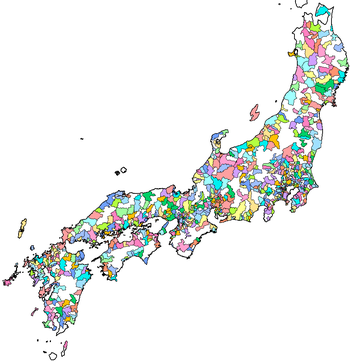 |
A is a local administrative
Public administration
Public Administration houses the implementation of government policy and an academic discipline that studies this implementation and that prepares civil servants for this work. As a "field of inquiry with a diverse scope" its "fundamental goal.....
unit in Japan
Japan
Japan is an island nation in East Asia. Located in the Pacific Ocean, it lies to the east of the Sea of Japan, China, North Korea, South Korea and Russia, stretching from the Sea of Okhotsk in the north to the East China Sea and Taiwan in the south...
. Cities are ranked on the same level as and , with the difference that they are not a component of . Like other contemporary administrative units, they are defined by the Local Autonomy Law
Local Autonomy Law
The Local Autonomy Law of Japan was passed as Law No. 67 on April 17, 1947, an Act of Devolution that established most of Japan's contemporary local government structures, including prefectures, municipalities and other entities....
of 1947.

Article 8 of the Local Autonomy Law sets the following conditions for a municipality to be designated as a city:

A city can theoretically be demoted to a town or village when it fails to meet any of these conditions, but such a demotion has not happened to date. The least populous city, Utashinai, Hokkaido
Utashinai, Hokkaido
is a city located in Sorachi Subprefecture, Hokkaidō, Japan. It is Japan's smallest city by population. It was formerly a prosperous coal mining city, but has declined greatly since the closing of the coal mines...
, has a population of six thousand, while a town in the same prefecture, Otofuke, Hokkaido
Otofuke, Hokkaido
is a town located in Katō District, Tokachi, Hokkaidō, Japan.As of 2008, the town has an estimated population of 44,402 and a density of 89.97 persons per km². The total area is 466.09 km².-External links:...
, has nearly forty thousand.

The Cabinet of Japan
Cabinet of Japan
The of Japan is the executive branch of the government of Japan. It consists of the Prime Minister and up to fourteen other members, called Ministers of State. The Prime Minister is designated by the Diet, and the remaining ministers are appointed and dismissed by the Prime Minister...
can designate cities of at least 200,000 inhabitants to have the status of special city
Special cities of Japan
of Japan are cities with populations of at least 200,000, and are delegated a subset of the functions delegated to core cities.This category was established by the Local Autonomy Law, article 252 clause 26...
, core city
Core city
A is a class of Japanese city created by the first clause of Article 252, Section 22 of the Local Autonomy Law of Japan. Core cities are delegated many functions normally carried out by prefectural governments, but not as many as designated cities...
, or designated city
City designated by government ordinance (Japan)
A , also known as a or , is a Japanese city that has a population greater than 500,000 and has been designated as such by an order of the cabinet of Japan under Article 252, Section 19 of the Local Autonomy Law.-Overview:...
. These statuses expand the scope of administrative authority delegated from the prefectural government to the city government.

Tokyo
Tokyo
, ; officially , is one of the 47 prefectures of Japan. Tokyo is the capital of Japan, the center of the Greater Tokyo Area, and the largest metropolitan area of Japan. It is the seat of the Japanese government and the Imperial Palace, and the home of the Japanese Imperial Family...
, Japan’s capital, existed as a city
Tokyo City
was a municipality in Japan and part of Tokyo-Fu which existed from May 1, 1889 until its merger with its prefecture on July 1, 1943. The historical boundaries of Tokyo City are now occupied by independent special wards...
until 1943, but is now legally classified as a special type of prefecture
Prefectures of Japan
The prefectures of Japan are the country's 47 subnational jurisdictions: one "metropolis" , Tokyo; one "circuit" , Hokkaidō; two urban prefectures , Osaka and Kyoto; and 43 other prefectures . In Japanese, they are commonly referred to as...
called a . The 23 special wards of Tokyo
Special wards of Tokyo
The are 23 municipalities that together make up the core and the most populous part of Tokyo, Japan. Together, they occupy the land that was the city of Tokyo before it was abolished in 1943. The special wards' structure was established under the Japanese Local Autonomy Law and is unique to...
, which constitute the core of the Tokyo metropolitan area, each have an administrative status analogous to that of cities. Tokyo also has several other incorporated cities, towns and villages within its jurisdiction.