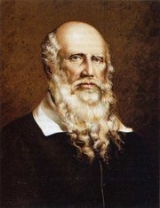 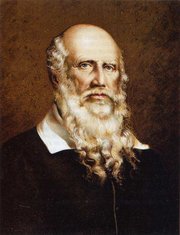 Friedrich Ludwig Jahn was a German
Germans
The Germans are a Germanic ethnic group native to Central Europe. The English term Germans has referred to the German-speaking population of the Holy Roman Empire since the Late Middle Ages....
gymnastics
Gymnastics
Gymnastics is a sport involving performance of exercises requiring physical strength, flexibility, agility, coordination, and balance. Internationally, all of the gymnastic sports are governed by the Fédération Internationale de Gymnastique with each country having its own national governing body...
educator and nationalist
Nationalism
Nationalism is a political ideology that involves a strong identification of a group of individuals with a political entity defined in national terms, i.e. a nation. In the 'modernist' image of the nation, it is nationalism that creates national identity. There are various definitions for what...
. He is commonly known as Turnvater Jahn, roughly meaning "father of gymnastics" Jahn.

Jahn was born in Lanz in Brandenburg
Brandenburg
Brandenburg is one of the sixteen federal-states of Germany. It lies in the east of the country and is one of the new federal states that were re-created in 1990 upon the reunification of the former West Germany and East Germany. The capital is Potsdam...
. He studied theology
Theology
Theology is the systematic and rational study of religion and its influences and of the nature of religious truths, or the learned profession acquired by completing specialized training in religious studies, usually at a university or school of divinity or seminary.-Definition:Augustine of Hippo...
and philology
Philology
Philology is the study of language in written historical sources; it is a combination of literary studies, history and linguistics.Classical philology is the philology of Greek and Classical Latin...
from 1796 to 1802 at Halle, Göttingen at the University of Greifswald. After the Battle of Jena-Auerstedt
Battle of Jena-Auerstedt
The twin battles of Jena and Auerstedt were fought on 14 October 1806 on the plateau west of the river Saale in today's Germany, between the forces of Napoleon I of France and Frederick William III of Prussia...
in 1806 he joined the Prussian army. In 1809 he went to Berlin
Berlin
Berlin is the capital city of Germany and is one of the 16 states of Germany. With a population of 3.45 million people, Berlin is Germany's largest city. It is the second most populous city proper and the seventh most populous urban area in the European Union...
, where he became a teacher at the Gymnasium zum Grauen Kloster and at the Plamann School
Johann Ernst Plamann
Johann Ernst Plamann was a German child educator. He based his work on the ideas of Johann Heinrich Pestalozzi and Friedrich Ludwig Jahn. Among his pupils was future German chancellor Otto von Bismarck....
.

Brooding upon what he saw as the humiliation of his native land by Napoleon, Jahn conceived the idea of restoring the spirits of his countrymen by the development of their physical and moral powers through the practice of gymnastics. The first Turnplatz, or open-air gymnasium, was opened by Jahn in Berlin in 1811, and the Turnverein (gymnastics association) movement spread rapidly. Young gymnasts were taught to regard themselves as members of a kind of guild for the emancipation of their fatherland. This nationalistic spirit was nourished in no small degree by the writings of Jahn.

Early in 1813 Jahn took an active part in the formation of the famous Lützow Free Corps
Lützow Free Corps
Lützow Free Corps was a voluntary force of the Prussian army during the Napoleonic Wars. It was named after its commander, Ludwig Adolf Wilhelm von Lützow. They were also widely known as "Lützower Jäger" or "Schwarze Jäger" .-Origins:...
, a volunteer force in the Prussian army fighting Napoleon. He commanded a battalion of the corps, though he was often employed in the secret service during the same period. After the war he returned to Berlin where he was appointed state teacher of gymnastics, and took on a role in the formation of the student patriotic fraternities, or Burschenschaft
Burschenschaft
German Burschenschaften are a special type of Studentenverbindungen . Burschenschaften were founded in the 19th century as associations of university students inspired by liberal and nationalistic ideas.-History:-Beginnings 1815–c...
en, in Jena.

Jahn crafted early models of the balance beam, horizontal bar, the parallel bars (from a horizontal ladder with the rungs removed), and the vaulting horse
Vault (gymnastics)
The vault is an artistic gymnastics apparatus, as well as the skill performed using that apparatus. Vaulting is also the action of performing a vault. Both male and female gymnasts perform the vault...
.

In honor and memory of him, some gymnastic clubs, called Turnvereine (German:Turnvereine), took up his name, the most well known of these is probably the SSV Jahn Regensburg.

A memorial to Jahn exists in St. Louis, Missouri, within Forest Park. It features a large bust of Jahn in the center of an arc of stone, with statues of a male and female gymnast, one on each end of the arc. The monument is on the edge of Art Hill next to the path running north and south along the western edge of Post-Dispatch lake. It is directly north of the St. Louis Zoo.

In his time Friedrich Jahn was seen by both his supporters and opponents as a liberal figure. He advocated that the German states should unite after the withdrawal of Napoleon's occupying armies, and establish a democratic constitution (under the Hohenzollern monarchy), which would include the right to free speech. As a German nationalist, Jahn advocated maintaining German language and culture against foreign influence. In 1810 he wrote, "Poles, French, priests, aristocrats and Jews are Germany's misfortune." At the time Jahn wrote this, the German states were occupied by foreign armies under the leadership of Napoleon. Also, Jahn was "the guiding spirit" of the fanatic book burning episode carried out by revolutionary students at the Wartburg festival
Wartburg festival
The first Wartburg festival on 18 October 1817 was an important event in German history that took place at the Wartburg Castle near Eisenach....
in 1817.

Jahn gained infamy in English-speaking countries through the publication of Peter Viereck's Metapolitics: The Roots of the Nazi Mind (1941). Viereck claimed Jahn as the spiritual founder of Nazism, who inspired the early German romantics with anti-Semitic and authoritarian doctrines, and then influenced Wagner and finally the Nazis. 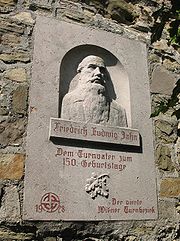 However, Jacques Barzun observed that Viereck's portrait of cultural trends supposedly leading to Nazism was "a caricature without resemblance" relying on "misleading shortcuts".
Viereck's claims concerning Jahn's supposed cultural influence, and influence on Nazism in particular, are not supported by evidence. The writings of the German Romantics do not even discuss Jahn, let alone endorse him. Joseph von Eichendorf's 1823 comedy "Krieg den Philistern" is unusual in mentioning Jahn at all, but does so only in order to ridicule him. Wagner, much influenced by Jahn according to Viereck, never even mentioned him.

Scholarly focus on the völkischness of Jahn's thought started in the 1920s with a new generation of Jahn interpreters like Edmund Neuendorff and Karl Müller. Neuendorff explicitly linked Jahn with National Socialism. The equation by the National Socialists of Jahn's ideas with their world view was more or less complete by the mid-1930s. Alfred Baeumler, an educational philosopher and university lecturer who attempted to provide theoretical support for Nazi ideology (through the interpretation of Nietzsche among others) wrote a monograph on Jahn in which he characterises Jahn's invention of gymnastics as an explicitly political project, designed to create the ultimate völkisch citizen by educating his body.