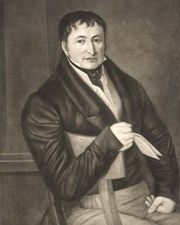 Friedrich Gottlob Koenig (April 17, 1774 in Eisleben
Eisleben
Eisleben is a town in Saxony-Anhalt, Germany. It is famous as the hometown of Martin Luther, hence its official name is Lutherstadt Eisleben. As of 2005, Eisleben had a population of 24,552...
– January 17, 1833) was a German
Germany
Germany , officially the Federal Republic of Germany , is a federal parliamentary republic in Europe. The country consists of 16 states while the capital and largest city is Berlin. Germany covers an area of 357,021 km2 and has a largely temperate seasonal climate...
inventor best-known for his high-speed printing press
Printing press
A printing press is a device for applying pressure to an inked surface resting upon a print medium , thereby transferring the ink...
, which he built together with watchmaker Andreas Friedrich Bauer
Andreas Friedrich Bauer
Andreas Friedrich Bauer was a German engineer who developed the first functional steam-powered printing press with his colleague Friedrich Koenig, who had invented the technology and sold it to The Times in London in 1814....
.

He moved to London in 1804 and in 1810 was granted a patent
Patent
A patent is a form of intellectual property. It consists of a set of exclusive rights granted by a sovereign state to an inventor or their assignee for a limited period of time in exchange for the public disclosure of an invention....
on his press, which produced its first trial run in April 1812. The machine was set up in their workshop, and invitations sent out to potential customers, notably John Walter
John Walter (second)
John Walter was the son of John Walter, the founder of The Times, and second editor of it.He was educated at Merchant Taylors' School and Trinity College, Oxford...
of The Times
The Times
The Times is a British daily national newspaper, first published in London in 1785 under the title The Daily Universal Register . The Times and its sister paper The Sunday Times are published by Times Newspapers Limited, a subsidiary since 1981 of News International...
. Amidst much secrecy, for fear of upsetting the existing pressmen, trials were carried out with great success. The first issue of The Times printed with the new presses was published on November 29, 1814.

In 1817 Koenig returned to Germany. After consideration he chose an abandoned monastery in Würzburg
Würzburg
Würzburg is a city in the region of Franconia which lies in the northern tip of Bavaria, Germany. Located at the Main River, it is the capital of the Regierungsbezirk Lower Franconia. The regional dialect is Franconian....
for the premises of the factory. The firm was called Koenig & Bauer
Koenig & Bauer
Koenig & Bauer AG is a German company that makes printing presses based in Würzburg. It was founded by Friedrich Koenig and Andreas Friedrich Bauer in Würzburg in 1817, making it the oldest printing press manufacturer in the world....
.

The table lists the maximum number of pages which Koenig's various press designs could print per hour, compared to earlier hand-operated printing presses: