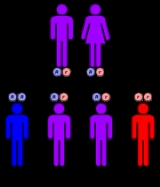 Encyclopedia
Friedreich's ataxia is an inherited disease that causes progressive damage
Progressive illness
The term progressive illness describes the course of an illness that gradually progresses and changes mode, generally to the worse. In contrast, non-progressive or chronic illnesses are relatively constant.-Examples:...
to the nervous system
Nervous system
The nervous system is an organ system containing a network of specialized cells called neurons that coordinate the actions of an animal and transmit signals between different parts of its body. In most animals the nervous system consists of two parts, central and peripheral. The central nervous...
, resulting in symptoms ranging from gait disturbance to speech problems; it can also lead to heart disease
Heart disease
Heart disease, cardiac disease or cardiopathy is an umbrella term for a variety of diseases affecting the heart. , it is the leading cause of death in the United States, England, Canada and Wales, accounting for 25.4% of the total deaths in the United States.-Types:-Coronary heart disease:Coronary...
and diabetes
Diabetes mellitus
Diabetes mellitus, often simply referred to as diabetes, is a group of metabolic diseases in which a person has high blood sugar, either because the body does not produce enough insulin, or because cells do not respond to the insulin that is produced...
.

The ataxia
Ataxia
Ataxia is a neurological sign and symptom that consists of gross lack of coordination of muscle movements. Ataxia is a non-specific clinical manifestation implying dysfunction of the parts of the nervous system that coordinate movement, such as the cerebellum...
of Friedreich's ataxia results from the degeneration
Degeneration
The idea of degeneration had significant influence on science, art and politics from the 1850s to the 1950s. The social theory developed consequently from Charles Darwin's Theory of Evolution...
of nerve tissue in the spinal cord
Spinal cord
The spinal cord is a long, thin, tubular bundle of nervous tissue and support cells that extends from the brain . The brain and spinal cord together make up the central nervous system...
, in particular sensory neurons essential (through connections with the cerebellum
Cerebellum
The cerebellum is a region of the brain that plays an important role in motor control. It may also be involved in some cognitive functions such as attention and language, and in regulating fear and pleasure responses, but its movement-related functions are the most solidly established...
) for directing muscle movement of the arms and legs. The spinal cord becomes thinner and nerve cells lose some of their myelin sheath (the insulating covering on some nerve cells that helps conduct nerve impulses).

Symptoms typically begin sometime between the ages of 5 to 15 years, but in Late Onset FA may occur in the 20s or 30s. Symptoms include any combination, but not necessarily all, of the following:

It presents before 25 years of age with progressive staggering or stumbling gait and frequent falling. Lower extremities are more severely involved. The symptoms are slow and progressive. Long-term observation shows that many patients reach a plateau in symptoms in the patient's early adulthood. 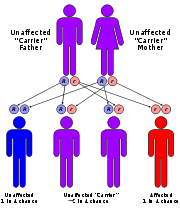 Friedreich's ataxia is an autosomal
Autosome
An autosome is a chromosome that is not a sex chromosome, or allosome; that is to say, there is an equal number of copies of the chromosome in males and females. For example, in humans, there are 22 pairs of autosomes. In addition to autosomes, there are sex chromosomes, to be specific: X and Y...
recessive
Recessive
In genetics, the term "recessive gene" refers to an allele that causes a phenotype that is only seen in a homozygous genotype and never in a heterozygous genotype. Every person has two copies of every gene on autosomal chromosomes, one from mother and one from father...
congenital ataxia and is caused by a mutation
Mutation
In molecular biology and genetics, mutations are changes in a genomic sequence: the DNA sequence of a cell's genome or the DNA or RNA sequence of a virus. They can be defined as sudden and spontaneous changes in the cell. Mutations are caused by radiation, viruses, transposons and mutagenic...
in gene
Gene
A gene is a molecular unit of heredity of a living organism. It is a name given to some stretches of DNA and RNA that code for a type of protein or for an RNA chain that has a function in the organism. Living beings depend on genes, as they specify all proteins and functional RNA chains...
FXN (formerly known as X25) that codes for frataxin
Frataxin
Frataxin is a protein that in humans is encoded by the FXN gene.Frataxin is localized to the mitochondrion. The function of frataxin is not entirely clear, but it seems to be involved in assembly of iron-sulfur clusters...
, located on chromosome
Chromosome
A chromosome is an organized structure of DNA and protein found in cells. It is a single piece of coiled DNA containing many genes, regulatory elements and other nucleotide sequences. Chromosomes also contain DNA-bound proteins, which serve to package the DNA and control its functions.Chromosomes...
9. This protein is essential for proper functioning of mitochondria (it has been shown to be connected with the removal of iron from the cytoplasm
Cytoplasm
The cytoplasm is a small gel-like substance residing between the cell membrane holding all the cell's internal sub-structures , except for the nucleus. All the contents of the cells of prokaryote organisms are contained within the cytoplasm...
surrounding the mitochondria, and in the absence of frataxin, the iron builds up and causes free radical damage). Nerve and muscle
Muscle
Muscle is a contractile tissue of animals and is derived from the mesodermal layer of embryonic germ cells. Muscle cells contain contractile filaments that move past each other and change the size of the cell. They are classified as skeletal, cardiac, or smooth muscles. Their function is to...
cells appear to be particularly sensitive to the deleterious effects of this type of mitochondrial dysfunction.

The primary site of pathology is spinal cord and peripheral nerves. Sclerosis
Sclerosis (medicine)
In medicine, sclerosis refers to the stiffening of a structure, usually caused by a replacement of the normal organ-specific tissue with connective tissue.Types include:...
and degeneration
Degeneration
The idea of degeneration had significant influence on science, art and politics from the 1850s to the 1950s. The social theory developed consequently from Charles Darwin's Theory of Evolution...
of dorsal root ganglion, spinocerebellar tracts, lateral corticospinal tract
Corticospinal tract
The corticospinal or pyramidal tract is a collection of axons that travel between the cerebral cortex of the brain and the spinal cord....
s, and posterior columns. In peripheral nerves there is a loss of large myelinated fibres.

Currently, there is a treatment approved in Canada called idebenone
Idebenone
Idebenone is an experimental drug, initially developed by Takeda Pharmaceutical Company for the treatment of Alzheimer's disease and other cognitive defects. This has been met with limited success. The Swiss company Santhera Pharmaceuticals has started to investigate it for the treatment of...
. This prescription medicine is also under regulatory review in the European Union and Switzerland. In both the United States and in Europe there are two Phase III clinical trials on-going with idebenone. As of 2009 the FDA has denied the distribution of idebenone in the United States and has discontinued the clinical trials.

A person suffering from Friedreich's Ataxia may require some surgical interventions (mainly for the spine and heart). Often a metal rod is inserted in the spine to help prevent or slow the progression of scoliosis. As progression of ataxia occurs, assistive devices such as a cane, walker, or wheelchair are required for mobility and independence. Other
assistive technology
Assistive technology
Assistive technology or adaptive technology is an umbrella term that includes assistive, adaptive, and rehabilitative devices for people with disabilities and also includes the process used in selecting, locating, and using them...
, such as a standing frame
Standing frame
A standing frame is assistive technology that can be used by a person who relies on a wheelchair for mobility...
, can help reduce the secondary complications of prolonged use of a wheelchair
Wheelchair
A wheelchair is a chair with wheels, designed to be a replacement for walking. The device comes in variations where it is propelled by motors or by the seated occupant turning the rear wheels by hand. Often there are handles behind the seat for someone else to do the pushing...
.

In many cases, patients experience significant heart conditions as well. These conditions, fortunately, are much more treatable, and are often countered with ACE inhibitor
ACE inhibitor
ACE inhibitors or angiotensin-converting enzyme inhibitors are a group of drugs used primarily for the treatment of hypertension and congestive heart failure...
s such as enalapril or lisinopril and other heart medications such as digoxin
Digoxin
Digoxin INN , also known as digitalis, is a purified cardiac glycoside and extracted from the foxglove plant, Digitalis lanata. Its corresponding aglycone is digoxigenin, and its acetyl derivative is acetyldigoxin...
.

Low intensity strengthening exercises should also be incorporated to maintain functional use of the upper and lower extremities. Fatigability should be monitored closely. Stabilization exercises of the trunk and low back can help with postural control and the management of scoliosis
Scoliosis
Scoliosis is a medical condition in which a person's spine is curved from side to side. Although it is a complex three-dimensional deformity, on an X-ray, viewed from the rear, the spine of an individual with scoliosis may look more like an "S" or a "C" than a straight line...
. This is especially indicative if the person is non-ambulatory and requires the use of a wheelchair. Balance and coordination training using visual feedback can also be incorporated into activities of daily living. Exercises should reflect functional tasks such as cooking, transfers and self-care. Along with gait training, balance and coordination training should be developed to help minimize the risk of falls.

Stretching exercises can be prescribed to help relieve tight musculature due to scoliosis
Scoliosis
Scoliosis is a medical condition in which a person's spine is curved from side to side. Although it is a complex three-dimensional deformity, on an X-ray, viewed from the rear, the spine of an individual with scoliosis may look more like an "S" or a "C" than a straight line...
and pes cavus
Pes cavus
High arch is a human foot type in which the sole of the foot is distinctly hollow when bearing weight. That is, there is a fixed plantar flexion of the foot...
deformities.

Friedreich's ataxia is the most prevalent inherited ataxia, affecting about 1 in 50,000 people in the United States. Males and females are affected equally. The estimated carrier prevalence is 1:110.

A 1984 Canadian study was able to trace 40 cases of classical Friedreich's disease from 14 French-Canadian kindreds previously thought to be unrelated to one common ancestral couple arriving in New France
New France
New France was the area colonized by France in North America during a period beginning with the exploration of the Saint Lawrence River by Jacques Cartier in 1534 and ending with the cession of New France to Spain and Great Britain in 1763...
in 1634: Jean Guyon
Jean Guyon
Jean Guyon du Buisson was born at the Saint-Aubin parish in Tourouvre, Orne, France on September 18, 1592...
and Mathurine Robin.

Friedreich, working as a professor of pathology
Pathology
Pathology is the precise study and diagnosis of disease. The word pathology is from Ancient Greek , pathos, "feeling, suffering"; and , -logia, "the study of". Pathologization, to pathologize, refers to the process of defining a condition or behavior as pathological, e.g. pathological gambling....
at the University of Heidelberg, reported five patients with the condition in a series of three papers in 1863. Further observations appeared in a further paper in 1876.