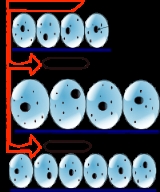 Hypertrophy is the increase in the volume of an organ or tissue due to the enlargement of its component cells
Cell (biology)
The cell is the basic structural and functional unit of all known living organisms. It is the smallest unit of life that is classified as a living thing, and is often called the building block of life. The Alberts text discusses how the "cellular building blocks" move to shape developing embryos....
. It should be distinguished from hyperplasia
Hyperplasia
Hyperplasia means increase in number of cells/proliferation of cells. It may result in the gross enlargement of an organ and the term is sometimes mixed with benign neoplasia/ benign tumor....
, in which the cells remain approximately the same size but increase in number. Although hypertrophy and hyperplasia are two distinct processes, they frequently occur together, such as in the case of the hormonally
Hormone
A hormone is a chemical released by a cell or a gland in one part of the body that sends out messages that affect cells in other parts of the organism. Only a small amount of hormone is required to alter cell metabolism. In essence, it is a chemical messenger that transports a signal from one...
-induced proliferation and enlargement of the cells of the uterus
Uterus
The uterus or womb is a major female hormone-responsive reproductive sex organ of most mammals including humans. One end, the cervix, opens into the vagina, while the other is connected to one or both fallopian tubes, depending on the species...
during pregnancy
Pregnancy
Pregnancy refers to the fertilization and development of one or more offspring, known as a fetus or embryo, in a woman's uterus. In a pregnancy, there can be multiple gestations, as in the case of twins or triplets...
.

One of the two most common and visible forms of organ hypertrophy occurs in skeletal muscles in response to strength training
Strength training
Strength training is the use of resistance to muscular contraction to build the strength, anaerobic endurance, and size of skeletal muscles. There are many different methods of strength training, the most common being the use of gravity or elastic/hydraulic forces to oppose muscle contraction...
(known as muscle hypertrophy
Muscle hypertrophy
Muscle hypertrophy is an increase in the size of muscle cells. It differs from muscle hyperplasia, which is the formation of new muscle cells.-Hypertrophy stimuli:A range of stimuli can increase the volume of muscle cells...
). Depending on the type of training, the hypertrophy can occur through increased sarcoplasm
Sarcoplasm
The Sarcoplasm of a muscle fiber is comparable to the cytoplasm of other cells, but it houses unusually large amounts of glycosomes and significant amounts of myoglobin, an oxygen binding protein...
ic volume or increased contractile proteins
Sliding filament mechanism
The sliding filament theory describes a process used by muscles to contract. It was independently developed by Andrew F. Huxley and Rolf Niedergerke and by Hugh Huxley and Jean Hanson in 1954.-Process of movement:...
.

Hypertrophy of the breasts

Gigantomastia
Gigantomastia
Hypertrophy of the breast is a rare disease of the breast connective tissues; the indication is a breast weight increase that exceeds , which enlargement causes muscular discomfort and over-stretching of the skin envelope, leading to ulceration...
is the extreme growth of the breasts, i.e. 10 pounds (5 kg) per breast and more. In severe cases it is possible for women to have breasts that weigh well in excess of 20 lb (9 kg) each. Gigantomastia can occur as a rare complication of pregnancy
Pregnancy
Pregnancy refers to the fertilization and development of one or more offspring, known as a fetus or embryo, in a woman's uterus. In a pregnancy, there can be multiple gestations, as in the case of twins or triplets...
, but also with the more frequently juvenile gigantomastia during puberty
Puberty
Puberty is the process of physical changes by which a child's body matures into an adult body capable of reproduction, as initiated by hormonal signals from the brain to the gonads; the ovaries in a girl, the testes in a boy...
(virginal breast hypertrophy).


Hypertrophy of the clitoris

In the most pronounced cases, clitoromegaly is a symptom of intersexuality since the large clitoris resembles a penis (the different grade of genital ambiguity is commonly measured by the Prader classification ranging, in ascending order of masculinisation, from 1: Female external genitalia with clitoromegaly through 5: Pseudo-phallus looking like normal male external genitalia).