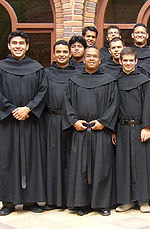 A friar is a member of one of the mendicant orders
Mendicant Orders
The mendicant orders are religious orders which depend directly on the charity of the people for their livelihood. In principle, they do not own property, either individually or collectively , believing that this was the most pure way of life to copy followed by Jesus Christ, in order that all...
.

Friars differ from monk
Monk
A monk is a person who practices religious asceticism, living either alone or with any number of monks, while always maintaining some degree of physical separation from those not sharing the same purpose...
s in that they are called to live the evangelical counsels (vows of poverty, chastity and obedience) in service to a community, rather than through cloister
Cloister
A cloister is a rectangular open space surrounded by covered walks or open galleries, with open arcades on the inner side, running along the walls of buildings and forming a quadrangle or garth...
ed asceticism
Asceticism
Asceticism describes a lifestyle characterized by abstinence from various sorts of worldly pleasures often with the aim of pursuing religious and spiritual goals...
and devotion. Whereas monks live in a self-sufficient community, friars work among laypeople and are supported by donations or other charitable support. A monk or nun makes their vows and commits to a particular community in a particular place. A friar in making vows commits to a community spread across a wider geographical area (a province), and so they will typically move around, spending time in different houses of the community within the province.

In English the name Friar is probably derived from the French
French language
French is a Romance language spoken as a first language in France, the Romandy region in Switzerland, Wallonia and Brussels in Belgium, Monaco, the regions of Quebec and Acadia in Canada, and by various communities elsewhere. Second-language speakers of French are distributed throughout many parts...
word frère ("brother" in English), as French was still widely used in official circles in England during the 13th century when the great orders of friars started. The French word frère in turn comes from the Latin word frater (brother), which is widely used in the Latin New Testament
New Testament
The New Testament is the second major division of the Christian biblical canon, the first such division being the much longer Old Testament....
to refer to members of the Christian community.

There are two classes of order known as friars, or mendicant orders: the four "great orders" and the so-called "lesser orders".

The four great orders were mentioned by the Second Council of Lyons (1274), and are:

Some of the lesser orders are:

Several schools and colleges use friars as their mascot
Mascot
The term mascot – defined as a term for any person, animal, or object thought to bring luck – colloquially includes anything used to represent a group with a common public identity, such as a school, professional sports team, society, military unit, or brand name...
. The MLB's
Major League Baseball
Major League Baseball is the highest level of professional baseball in the United States and Canada, consisting of teams that play in the National League and the American League...
San Diego Padres
San Diego Padres
The San Diego Padres are a Major League Baseball team based in San Diego, California. They play in the National League Western Division. Founded in 1969, the Padres have won the National League Pennant twice, in 1984 and 1998, losing in the World Series both times...
have the Swinging Friar.

The University of Michigan's oldest a cappella
A cappella
A cappella music is specifically solo or group singing without instrumental sound, or a piece intended to be performed in this way. It is the opposite of cantata, which is accompanied singing. A cappella was originally intended to differentiate between Renaissance polyphony and Baroque concertato...
group is a male octet known as The Friars.