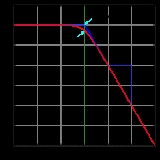 Encyclopedia
Frequency response is the quantitative measure of the output spectrum
Frequency spectrum
The frequency spectrum of a time-domain signal is a representation of that signal in the frequency domain. The frequency spectrum can be generated via a Fourier transform of the signal, and the resulting values are usually presented as amplitude and phase, both plotted versus frequency.Any signal...
of a system or device in response to a stimulus, and is used to characterize the dynamics of the system. It is a measure of magnitude and phase of the output as a function of frequency, in comparison to the input. In simplest terms, if a sine wave is injected into a system at a given frequency, a linear system will respond at that same frequency with a certain magnitude and a certain phase angle relative to the input. Also for a linear system, doubling the amplitude of the input will double the amplitude of the output. In addition, if the system is time-invariant, then the frequency response also will not vary with time.

Two applications of frequency response analysis are related but have different objectives. For an audio system, the objective may be to reproduce the input signal with no distortion. That would require a uniform (flat) magnitude of response up to the bandwidth limitation of the system, with the signal delayed by precisely the same amount of time at all frequencies. That amount of time could be seconds, or weeks or months in the case of recorded media. In contrast, for a feedback apparatus used to control a dynamical system, the objective is to give the closed-loop system improved response as compared to the uncompensated system. The feedback generally needs to respond to system dynamics within a very small number of cycles of oscillation (usually less than one full cycle), and with a definite phase angle relative to the commanded control input. For feedback of sufficient amplification, getting the phase angle wrong can lead to instability for an open-loop stable system, or failure to stabilize a system that is open-loop unstable. Digital filters may be used for both audio systems and feedback control systems, but since the objectives are different, generally the phase characteristics of the filters will be significantly different for the two applications. 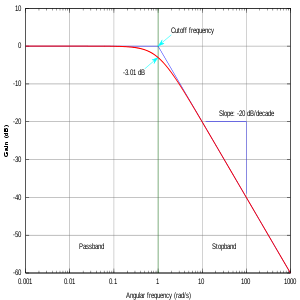 The frequency response of a system can be measured by applying a test signal, for example:

The frequency response is characterized by the magnitude
Amplitude
Amplitude is the magnitude of change in the oscillating variable with each oscillation within an oscillating system. For example, sound waves in air are oscillations in atmospheric pressure and their amplitudes are proportional to the change in pressure during one oscillation...
of the system's response, typically measured in decibels
Decibel
The decibel is a logarithmic unit that indicates the ratio of a physical quantity relative to a specified or implied reference level. A ratio in decibels is ten times the logarithm to base 10 of the ratio of two power quantities...
(dB) or as a decimal, and the phase
Phase (waves)
Phase in waves is the fraction of a wave cycle which has elapsed relative to an arbitrary point.-Formula:The phase of an oscillation or wave refers to a sinusoidal function such as the following:...
, measured in radians or degrees, versus frequency in radians/sec or Hertz
Hertz
The hertz is the SI unit of frequency defined as the number of cycles per second of a periodic phenomenon. One of its most common uses is the description of the sine wave, particularly those used in radio and audio applications....
(Hz).

These response measurements can be plotted in three ways: by plotting the magnitude and phase measurements on two rectangular plots as functions of frequency to obtain a Bode plot
Bode plot
A Bode plot is a graph of the transfer function of a linear, time-invariant system versus frequency, plotted with a log-frequency axis, to show the system's frequency response...
; by plotting the magnitude and phase angle on a single polar plot with frequency as a parameter to obtain a Nyquist plot
Nyquist plot
A Nyquist plot is a parametric plot of a transfer function used in automatic control and signal processing. The most common use of Nyquist plots is for assessing the stability of a system with feedback. In Cartesian coordinates, the real part of the transfer function is plotted on the X axis. The...
; or by plotting magnitude and phase on a single rectangular plot with frequency as a parameter to obtain a Nichols plot.

For audio systems with nearly uniform time delay at all frequencies, the magnitude versus frequency portion of the Bode plot may be all that is of interest. For design of control systems, any of the three types of plots [Bode, Nyquist, Nichols] can be used to infer closed-loop stability and stability margins (gain and phase margins) from the open-loop frequency response, provided that for the Bode analysis the phase-versus-frequency plot is included.

In electronics this stimulus would be an input signal. In the audible range it is usually referred to in connection with electronic amplifier
Electronic amplifier
An electronic amplifier is a device for increasing the power of a signal.It does this by taking energy from a power supply and controlling the output to match the input signal shape but with a larger amplitude...
s, microphone
Microphone
A microphone is an acoustic-to-electric transducer or sensor that converts sound into an electrical signal. In 1877, Emile Berliner invented the first microphone used as a telephone voice transmitter...
s and loudspeakers. Radio spectrum frequency response can refer to measurements of coaxial cable
Coaxial cable
Coaxial cable, or coax, has an inner conductor surrounded by a flexible, tubular insulating layer, surrounded by a tubular conducting shield. The term coaxial comes from the inner conductor and the outer shield sharing the same geometric axis...
, twisted-pair cable
Category 6 cable
Category 6 cable, commonly referred to as Cat 6, is a cable standard for Gigabit Ethernet and other network physical layers that is backward compatible with the Category 5/5e and Category 3 cable standards. Compared with Cat 5 and Cat 5e, Cat 6 features more stringent specifications for crosstalk...
, video switching equipment, wireless
Wireless
Wireless telecommunications is the transfer of information between two or more points that are not physically connected. Distances can be short, such as a few meters for television remote control, or as far as thousands or even millions of kilometers for deep-space radio communications...
communications devices, and antenna systems. Infrasonic frequency response measurements include earthquakes and electroencephalography
Electroencephalography
Electroencephalography is the recording of electrical activity along the scalp. EEG measures voltage fluctuations resulting from ionic current flows within the neurons of the brain...
(brain waves).

Frequency response requirements differ depending on the application. In high fidelity
High fidelity
High fidelity—or hi-fi—reproduction is a term used by home stereo listeners and home audio enthusiasts to refer to high-quality reproduction of sound or images, to distinguish it from the poorer quality sound produced by inexpensive audio equipment...
audio, an amplifier requires a frequency response of at least 20–20,000 Hz, with a tolerance as tight as ±0.1 dB in the mid-range frequencies around 1000 Hz, however, in telephony
Telephony
In telecommunications, telephony encompasses the general use of equipment to provide communication over distances, specifically by connecting telephones to each other....
, a frequency response of 400–4,000 Hz, with a tolerance of ±1 dB is sufficient for intelligibility of speech.

Once a frequency response has been measured (e.g., as an impulse response), providing the system is linear and time-invariant
LTI system theory
Linear time-invariant system theory, commonly known as LTI system theory, comes from applied mathematics and has direct applications in NMR spectroscopy, seismology, circuits, signal processing, control theory, and other technical areas. It investigates the response of a linear and time-invariant...
, its characteristic can be approximated with arbitrary accuracy by a digital filter
Digital filter
In electronics, computer science and mathematics, a digital filter is a system that performs mathematical operations on a sampled, discrete-time signal to reduce or enhance certain aspects of that signal. This is in contrast to the other major type of electronic filter, the analog filter, which is...
. Similarly, if a system is demonstrated to have a poor frequency response, a digital or analog filter can be applied to the signals prior to their reproduction to compensate for these deficiencies.