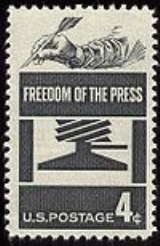 In Lovell v. City of Griffin, Chief Justice Hughes defined the press as, "every sort of publication which affords a vehicle of information and opinion." This includes everything from newspaper
Newspaper
A newspaper is a scheduled publication containing news of current events, informative articles, diverse features and advertising. It usually is printed on relatively inexpensive, low-grade paper such as newsprint. By 2007, there were 6580 daily newspapers in the world selling 395 million copies a...
s to blog
Blog
A blog is a type of website or part of a website supposed to be updated with new content from time to time. Blogs are usually maintained by an individual with regular entries of commentary, descriptions of events, or other material such as graphics or video. Entries are commonly displayed in...
s.

As famously said by journalist A. J. Liebling
A. J. Liebling
Abbott Joseph Liebling was an American journalist who was closely associated with The New Yorker from 1935 until his death.-Biography:...
, "Freedom of the press is guaranteed only to those who own one." The individuals, businesses, and organizations that own a means of publication are able to publish information and opinions without government interference, and cannot be compelled by the government to publish information and opinions that they disagree with. For example, the owner of a printing press cannot be required to print advertisements for a political opponent, even if the printer normally accepts commercial printing jobs.

The United States are, as of 2009, joint 20th in the Reporters Without Borders
Reporters Without Borders
Reporters Without Borders is a France-based international non-governmental organization that advocates freedom of the press. It was founded in 1985, by Robert Ménard, Rony Brauman and the journalist Jean-Claude Guillebaud. Jean-François Julliard has served as Secretary General since 2008...
Press Freedom Index
Press Freedom Index
The Press Freedom Index is an annual ranking of countries compiled and published by Reporters Without Borders based upon the organization's assessment of their press freedom records. Small countries, such as Andorra, are excluded from this report...
. This is a measure of freedom available to the press, encompassing areas such as government censorship, and not indicative of the quality of journalism. In 2009 the United States climbed 16 places from 36th in 2008 with a score of 4.00, with Denmark
Denmark
Denmark is a Scandinavian country in Northern Europe. The countries of Denmark and Greenland, as well as the Faroe Islands, constitute the Kingdom of Denmark . It is the southernmost of the Nordic countries, southwest of Sweden and south of Norway, and bordered to the south by Germany. Denmark...
, Finland
Finland
Finland , officially the Republic of Finland, is a Nordic country situated in the Fennoscandian region of Northern Europe. It is bordered by Sweden in the west, Norway in the north and Russia in the east, while Estonia lies to its south across the Gulf of Finland.Around 5.4 million people reside...
, Ireland
Ireland
Ireland is an island to the northwest of continental Europe. It is the third-largest island in Europe and the twentieth-largest island on Earth...
, Norway
Norway
Norway , officially the Kingdom of Norway, is a Nordic unitary constitutional monarchy whose territory comprises the western portion of the Scandinavian Peninsula, Jan Mayen, and the Arctic archipelago of Svalbard and Bouvet Island. Norway has a total area of and a population of about 4.9 million...
and Sweden
Sweden
Sweden , officially the Kingdom of Sweden , is a Nordic country on the Scandinavian Peninsula in Northern Europe. Sweden borders with Norway and Finland and is connected to Denmark by a bridge-tunnel across the Öresund....
tied for first place with 0.00 and Eritrea
Eritrea
Eritrea , officially the State of Eritrea, is a country in the Horn of Africa. Eritrea derives it's name from the Greek word Erethria, meaning 'red land'. The capital is Asmara. It is bordered by Sudan in the west, Ethiopia in the south, and Djibouti in the southeast...
bottom of the list with 115.50.

In the Freedom of the Press
Freedom of the Press (report)
Freedom of the Press is a yearly report by US-based non-governmental organization Freedom House, measuring the level of freedom and editorial independence enjoyed by the press in every nation and significant disputed territories around the world. Levels of freedom are scored on a scale from 1 to 100...
2009 report, published by Freedom House
Freedom House
Freedom House is an international non-governmental organization based in Washington, D.C. that conducts research and advocacy on democracy, political freedom and human rights...
the United States is ranked fourth in the Americas
Americas
The Americas, or America , are lands in the Western hemisphere, also known as the New World. In English, the plural form the Americas is often used to refer to the landmasses of North America and South America with their associated islands and regions, while the singular form America is primarily...
, and joint 24th globally. This reports from 0 (free) to 100 (not free), with the United States scoring 18 compared to Iceland
Iceland
Iceland , described as the Republic of Iceland, is a Nordic and European island country in the North Atlantic Ocean, on the Mid-Atlantic Ridge. Iceland also refers to the main island of the country, which contains almost all the population and almost all the land area. The country has a population...
(top of the list) on 9 and North Korea
North Korea
The Democratic People’s Republic of Korea , , is a country in East Asia, occupying the northern half of the Korean Peninsula. Its capital and largest city is Pyongyang. The Korean Demilitarized Zone serves as the buffer zone between North Korea and South Korea...
(bottom of the list) on 98..