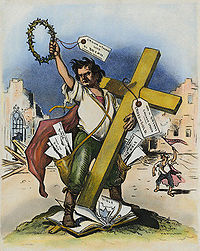 The Cross of Gold speech was delivered by William Jennings Bryan
William Jennings Bryan
William Jennings Bryan was an American politician in the late-19th and early-20th centuries. He was a dominant force in the liberal wing of the Democratic Party, standing three times as its candidate for President of the United States...
at the 1896 Democratic National Convention
1896 Democratic National Convention
The 1896 Democratic National Convention, held at the Chicago Coliseum from July 7 to July 11, was the scene of William Jennings Bryan's nomination as Democratic presidential candidate for the 1896 U.S. presidential election....
in Chicago
Chicago
Chicago is the largest city in the US state of Illinois. With nearly 2.7 million residents, it is the most populous city in the Midwestern United States and the third most populous in the US, after New York City and Los Angeles...
on July 8, 1896. The speech advocated bimetallism
Bimetallism
In economics, bimetallism is a monetary standard in which the value of the monetary unit is defined as equivalent both to a certain quantity of gold and to a certain quantity of silver; such a system establishes a fixed rate of exchange between the two metals...
. Following the Coinage Act (1873), the United States
United States
The United States of America is a federal constitutional republic comprising fifty states and a federal district...
abandoned its policy of bimetallism and began to operate a de facto
De facto
De facto is a Latin expression that means "concerning fact." In law, it often means "in practice but not necessarily ordained by law" or "in practice or actuality, but not officially established." It is commonly used in contrast to de jure when referring to matters of law, governance, or...
gold standard, which was then modified by the Sherman Silver Purchase Act
Sherman Silver Purchase Act
The Sherman Silver Purchase Act was enacted on July 14, 1890 as a United States federal law. It was named after its author, Senator John Sherman, an Ohio Republican, chairman of the Senate Finance Committee...
in 1890. This was followed by the Panic of 1893
Panic of 1893
The Panic of 1893 was a serious economic depression in the United States that began in 1893. Similar to the Panic of 1873, this panic was marked by the collapse of railroad overbuilding and shaky railroad financing which set off a series of bank failures...
, which resulted in a depression. In 1896, Bryan's wing of the Democratic Party
Democratic Party (United States)
The Democratic Party is one of two major contemporary political parties in the United States, along with the Republican Party. The party's socially liberal and progressive platform is largely considered center-left in the U.S. political spectrum. The party has the lengthiest record of continuous...
rejected the policies of Bourbon Democratic
Bourbon Democrat
Bourbon Democrat was a term used in the United States from 1876 to 1904 to refer to a member of the Democratic Party, conservative or classical liberal, especially one who supported President Grover Cleveland in 1884–1888/1892–1896 and Alton B. Parker in 1904. After 1904, the Bourbons faded away...
President Grover Cleveland
Grover Cleveland
Stephen Grover Cleveland was the 22nd and 24th president of the United States. Cleveland is the only president to serve two non-consecutive terms and therefore is the only individual to be counted twice in the numbering of the presidents...
and wanted to standardize the value of the dollar to silver
Silver
Silver is a metallic chemical element with the chemical symbol Ag and atomic number 47. A soft, white, lustrous transition metal, it has the highest electrical conductivity of any element and the highest thermal conductivity of any metal...
and opposed a monometallic gold standard
Gold standard
The gold standard is a monetary system in which the standard economic unit of account is a fixed mass of gold. There are distinct kinds of gold standard...
. Despite other economic problems of the 1890s, the mandated purchasing of silver by the United States government is credited in part for reversing the deflation which the U.S. experienced from 1873 to 1896. Bryan would win the Democratic nomination in 1896, but he ultimately lost the general election
United States presidential election, 1896
The United States presidential election held on November 3, 1896, saw Republican William McKinley defeat Democrat William Jennings Bryan in a campaign considered by political scientists to be one of the most dramatic and complex in American history....
.

Backers of a monometallic gold standard felt that protection against inflation was of paramount importance, and they believed that a monometallic gold standard was the best way to achieve this end. Inflation is disadvantageous for creditors, and degrades the value of savings. Saving represents deferred spending and a source of capital for lending.

Despite winning every state of the former Confederacy
Confederate States of America
The Confederate States of America was a government set up from 1861 to 1865 by 11 Southern slave states of the United States of America that had declared their secession from the U.S...
and all but four states that lay entirely to the West of the Mississippi River
Mississippi River
The Mississippi River is the largest river system in North America. Flowing entirely in the United States, this river rises in western Minnesota and meanders slowly southwards for to the Mississippi River Delta at the Gulf of Mexico. With its many tributaries, the Mississippi's watershed drains...
, Bryan was beaten in the presidential election by William McKinley
William McKinley
William McKinley, Jr. was the 25th President of the United States . He is best known for winning fiercely fought elections, while supporting the gold standard and high tariffs; he succeeded in forging a Republican coalition that for the most part dominated national politics until the 1930s...
. Bryan was defeated again (but more soundly) by McKinley in 1900
United States presidential election, 1900
The United States presidential election of 1900 was a re-match of the 1896 race between Republican President William McKinley and his Democratic challenger, William Jennings Bryan. The return of economic prosperity and recent victory in the Spanish–American War helped McKinley to score a decisive...
and the United States adopted the monometallic gold standard de jure
De jure
De jure is an expression that means "concerning law", as contrasted with de facto, which means "concerning fact".De jure = 'Legally', De facto = 'In fact'....
in that year. By the first decade of the twentieth century, among major nations, only China
China
Chinese civilization may refer to:* China for more general discussion of the country.* Chinese culture* Greater China, the transnational community of ethnic Chinese.* History of China* Sinosphere, the area historically affected by Chinese culture...
and Hong Kong
Hong Kong
Hong Kong is one of two Special Administrative Regions of the People's Republic of China , the other being Macau. A city-state situated on China's south coast and enclosed by the Pearl River Delta and South China Sea, it is renowned for its expansive skyline and deep natural harbour...
remained on the silver standard
Silver standard
The silver standard is a monetary system in which the standard economic unit of account is a fixed weight of silver. The silver specie standard was widespread from the fall of the Byzantine Empire until the 19th century...
.

The speech was given in the context of a wider debate about bimetallism at the Democratic convention, and so the greater part of Bryan's speech was devoted to responses to other speakers whose contributions have largely been forgotten. Bryan's speech places him in the camp of Western interests (largely farmers and other borrowers) against Eastern interests (moneylenders), in the camp of rural interests against urban interests, and in the camp of economic nationalists
Economic nationalism
Economic nationalism is a term used to describe policies which emphasize domestic control of the economy, labor and capital formation, even if this requires the imposition of tariffs and other restrictions on the movement of labor, goods and capital. It opposes globalization in many cases, or at...
against internationalists who were concerned about the U.S. abandoning the gold standard. Bryan's speech cemented his role as a leading voice for economic populism
Populism
Populism can be defined as an ideology, political philosophy, or type of discourse. Generally, a common theme compares "the people" against "the elite", and urges social and political system changes. It can also be defined as a rhetorical style employed by members of various political or social...
. The speech criticizes an early form of trickle-down economics
Trickle-down economics
"Trickle-down economics" and "the trickle-down theory" are terms used in United States politics to refer to the idea that tax breaks or other economic benefits provided by government to businesses and the wealthy will benefit poorer members of society by improving the economy as a whole...
: "There are two ideas of government. There are those who believe that if you just legislate to make the well-to-do prosperous, that their prosperity will leak through on those below. The Democratic idea has been that if you legislate to make the masses prosperous their prosperity will find its way up and through every class that rests upon it."

"Having behind us the producing masses of this nation and the world, supported by the commercial interests, the laboring interests and the toilers everywhere, we will answer their demand for a gold standard by saying to them: You shall not press down upon the brow of labor this crown of thorns, you shall not crucify mankind upon a cross of gold."

At the conclusion of the speech, Bryan stretched out his arms in a Christ-like manner for five seconds, while the crowd remained quiet. According to the New York World, at that point everyone seemed to go mad at once and shrieked and rushed the stage. The New York Times commented that "a wild, raging irresistible mob" had been unleashed.