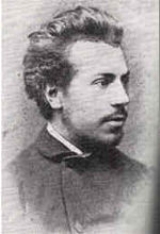 Encyclopedia
Henrik Pontoppidan was a realist writer who shared with Karl Gjellerup
Karl Adolph Gjellerup
Karl Gjellerup was a Danish poet and novelist who together with his compatriot Henrik Pontoppidan won the Nobel Prize in Literature in 1917. He belonged to the Modern Break-Through. He occasionally used the pseudonym Epigonos.Gjellerup was the son of a vicar in Zealand and grew up in a national...
the Nobel Prize for Literature in 1917 for "his authentic descriptions of present-day life in Denmark
Denmark
Denmark is a Scandinavian country in Northern Europe. The countries of Denmark and Greenland, as well as the Faroe Islands, constitute the Kingdom of Denmark . It is the southernmost of the Nordic countries, southwest of Sweden and south of Norway, and bordered to the south by Germany. Denmark...
." Pontoppidan's novels and short stories — informed with a desire for social progress but despairing, later in his life, of its realization — present an unusually comprehensive picture of his country and his epoch. As a writer he was an interesting figure, distancing himself both from the conservative environment in which he was brought up and from his socialist contemporaries and friends. He was the youngest and in many ways the most original and influential member of the Modern Break-Through.

The son of a Jutland
Jutland
Jutland , historically also called Cimbria, is the name of the peninsula that juts out in Northern Europe toward the rest of Scandinavia, forming the mainland part of Denmark. It has the North Sea to its west, Kattegat and Skagerrak to its north, the Baltic Sea to its east, and the Danish–German...
ic vicar and belonging to an old family of vicars and writers, Pontoppidan gave up an education as an engineer, worked as a primary school teacher and finally became a freelance journalist and full-time writer, making his debut in 1881.

The first phase of his work constitutes rebellious social criticism, and as such was also a revolt against his own privileged family background. In a famous quote, Henrik Pontoppidan mocked the historic latinisation
Latinisation (literature)
Latinisation is the practice of rendering a non-Latin name in a Latin style. It is commonly met with for historical personal names, with toponyms, or for the standard binomial nomenclature of the life sciences. It goes further than Romanisation, which is the writing of a word in the Latin alphabet...
of his own surname Pontoppidan from its original Danish root Broby

In matter-of-fact short stories he mercilessly describes the life of the peasants and country proletarians, with whom he lived in close contact. He was perhaps the first Danish progressive writer to break with an idealised portrayal of farmers. The tales from this era are collected in Landsbybilleder ("Village Pictures", 1883) and Fra Hytterne ("From the Huts", 1887). An important part is his 1890 political collection of short stories Skyer ("Clouds"), a biting description of Denmark under the authoritarian semi-dictatorship of the Conservatives both condemning the oppressors and scorning the Danes’ lack of disaffection. After this period he increasingly concentrated on psychological and naturalist problems without giving up his social engagement. Pontoppidan's 1889 review "Messias" and 1890 piece "Den gamle Adam" were anonymously published and triggered a controversy after being denounced as blasphemous
Blasphemy
Blasphemy is irreverence towards religious or holy persons or things. Some countries have laws to punish blasphemy, while others have laws to give recourse to those who are offended by blasphemy...
. The editor, Ernst Brandes
Ernst Immanuel Cohen Brandes
Ernst Immanuel Cohen Brandes was a Danish economist, writer, and newspaper editor best known for editing the Kjøbenhavns Børs-Tidende, which published articles written by leading Danish men of letters, including future Nobel Prize winner Henrik Pontoppidan, during a period later hailed as the...
, was fined 300 kroner for "Messias" in December 1891 and committed suicide
Suicide
Suicide is the act of intentionally causing one's own death. Suicide is often committed out of despair or attributed to some underlying mental disorder, such as depression, bipolar disorder, schizophrenia, alcoholism, or drug abuse...
in 1892.

The three novels which are normally considered to be Pontoppidan’s main works were written from about 1890 to 1920. In these works he established on his own terms a Danish version of the "broad description of society" novel in the tradition of Balzac and Zola
Émile Zola
Émile François Zola was a French writer, the most important exemplar of the literary school of naturalism and an important contributor to the development of theatrical naturalism...
. Centred around a hero he paints a picture of Denmark in the era of the Constitutional Struggle between Conservative and Liberals, rising industrialisation, cultural conflicts and awakening revolutionary movements.

Pontoppidan's last large novel Mands Himmerig (1927, "Man’s Heaven") is an almost desperate description of the crisis of a Danish intellectual at the time of the outbreak of World War I
World War I
World War I , which was predominantly called the World War or the Great War from its occurrence until 1939, and the First World War or World War I thereafter, was a major war centred in Europe that began on 28 July 1914 and lasted until 11 November 1918...
.

Pontoppidan also wrote many short novels and long tales in which he discussed political, psychological and sexual themes. Isbjørnen (1887, "The Polar Bear") describes the confrontation between an outspoken vicar from Greenland
Greenland
Greenland is an autonomous country within the Kingdom of Denmark, located between the Arctic and Atlantic Oceans, east of the Canadian Arctic Archipelago. Though physiographically a part of the continent of North America, Greenland has been politically and culturally associated with Europe for...
and his narrow-minded Danish provincial clergymen. Mimoser (1886, Engl. transl. The Apothecary’s Daughters, 1890) is an ironic-tragic tale about the exaggerated intolerance of unfaithfulness. Nattevagt (1894, "Night Watch") deals with a courageous and revolutionary artist who is nevertheless a frustrated failure as a husband. Den gamle Adam (1894, "The Old Adam") deals with both men’s fear of women and of sexuality
Human sexuality
Human sexuality is the awareness of gender differences, and the capacity to have erotic experiences and responses. Human sexuality can also be described as the way someone is sexually attracted to another person whether it is to opposite sexes , to the same sex , to either sexes , or not being...
as a whole. "Borgmester Hoeck og Hustru" (1905, Engl. transl. Burgomaster Hoeck and His Wife, 1999) portrays a tragic marriage dominated by the husband's jealousy and dislike of his wife's joy in life.

A central theme in most of these tales is the difficulties of handling the new tolerance, open-mindedness and democratisation which are introduced by both the transition of society and by literature. Another theme is the conflict between the introverted and closed male nature and the vitality of the woman. Behind all this lies the classic naturalist theme of heritage and milieu against which man has to rebel without quite denying their existence. In his later works he sometimes seems to become a mixture of a castigator of society and a prophet of doom.

Between 1933 and 1943 Pontoppidan wrote two different versions of his Memoirs, in which he tried to define his own view of his personal development. Though handicapped by blindness and deafness in later life, he continued to take an interest in politics and cultural life until his final years.

As a stylist Pontoppidan has been described a born naturalist
Naturalism (literature)
Naturalism was a literary movement taking place from the 1880s to 1940s that used detailed realism to suggest that social conditions, heredity, and environment had inescapable force in shaping human character...
. His language looks plain, simple and easy but is often loaded with symbols and secret hints, hidden irony and “objective” descriptions. He often revised previous works, simplifying them but also changing their plot or sharpening their attitude.

In spite of being well-known as a man of positions and attitudes Pontoppidan remains one of the most discussed modern Danish writers. This is partly because of his personal character. Pontoppidan was a man of many paradoxes: a clear liberal in his time, but a stern patriot, an anti-clerical puritan, a disillusioned fighting nature, collaborating with socialists but always from an independent and individualist position. But it is also partly due to his style which has often been regarded as ambiguous and impenetrable; his mixture of partiality and objectivity has often confused both readers and critics and in fact liberals, radicals, conservatives, right wingers and socialists have all tried to reflect their own ideals in his works. He has been regarded both as the absolute antagonist of Georg Brandes
Georg Brandes
Georg Morris Cohen Brandes was a Danish critic and scholar who had great influence on Scandinavian and European literature from the 1870s through the turn of the 20th century. He is seen as the theorist behind the "Modern Breakthrough" of Scandinavian culture...
and as his most congenial pupil.

Among all the authors of the Modern Break-Through, Pontoppidan is probably the most influential and longest living. His social critical writings mark him as a pioneer of 20th Century Danish literature. Cultural conservatives have been inspired by his critique of modernism after World War I. Finally, he set a standard of "novels about society" which remains relevant.