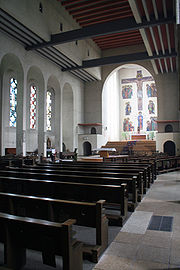 The Frauenfriedenskirche (German
German language
German is a West Germanic language, related to and classified alongside English and Dutch. With an estimated 90 – 98 million native speakers, German is one of the world's major languages and is the most widely-spoken first language in the European Union....
for Our Lady's Peace Church) is a Roman Catholic church in Bockenheim, Frankfurt am Main (Germany
Germany
Germany , officially the Federal Republic of Germany , is a federal parliamentary republic in Europe. The country consists of 16 states while the capital and largest city is Berlin. Germany covers an area of 357,021 km2 and has a largely temperate seasonal climate...
). It was built by Hans Herkommer from 1927 to 1929, on a rise then known as Ginnheimer Höhe. The church is an unusual example of interwar modernist
Modernism
Modernism, in its broadest definition, is modern thought, character, or practice. More specifically, the term describes the modernist movement, its set of cultural tendencies and array of associated cultural movements, originally arising from wide-scale and far-reaching changes to Western society...
church architecture, combining elements of expressionism
Expressionist architecture
Expressionist architecture was an architectural movement that developed in Europe during the first decades of the 20th century in parallel with the expressionist visual and performing arts....
with the "New Objectivity"
New Objectivity (architecture)
The New Objectivity is a name often given to the Modern architecture that emerged in Europe, primarily German-speaking Europe, in the 1920s and 30s. It is also frequently called Neues Bauen...
of Bauhaus architecture, and using monumental mosaic
Mosaic
Mosaic is the art of creating images with an assemblage of small pieces of colored glass, stone, or other materials. It may be a technique of decorative art, an aspect of interior decoration, or of cultural and spiritual significance as in a cathedral...
s for external and internal decoration.

The plan to build such a church was developed in 1916 by Hedwig Dransfeld
Hedwig Dransfeld
Hedwig Dransfeld was a German Catholic feminist, writer and member of parliament.-Biography:Hedwig Dransfeld was born in Hacheney , Germany to the Romberg family . Her father, Clemens Dransfeld, was a senior forester, and her mother, Elise Fleischhauer, was a doctor's daughter and a Catholic...
, then chairperson of the Katholischer Deutscher Frauenbund (Catholic German Women's Organisation). The church was meant to represent a prayer for peace in stone and also serve as a memorial for the fallen
Killed in action
Killed in action is a casualty classification generally used by militaries to describe the deaths of their own forces at the hands of hostile forces. The United States Department of Defense, for example, says that those declared KIA need not have fired their weapons but have been killed due to...
of the First World War. The foundation money initially collected for the project was lost due to the 1914-1923 German hyperinflation
Inflation in the Weimar Republic
The hyperinflation in the Weimar Republic was a three year period of hyperinflation in Germany between June 1921 and July 1924.- Analysis :...
.

The church was finally completed on 5 May 1929 and handed to the Catholic congregation of Bockenheim. It was badly damaged in the Second World War, and afterwards rebuilt with money donated for the purpose. The names of any German soldiers killed or missing in either World War were displayed in the church in return for a donation.

The church, its rectory, and the parish halls form an architectural unit, together with the 18 by 30 metres (59 by 98 ft) memorial yard. The church's west facade is dominated by a 25 metres (82 ft) high portal structure, or tower, subdivided by three high round arches. The middle arch contains a monumental mosaic
Mosaic
Mosaic is the art of creating images with an assemblage of small pieces of colored glass, stone, or other materials. It may be a technique of decorative art, an aspect of interior decoration, or of cultural and spiritual significance as in a cathedral...
-covered statue of Mary as Queen of Peace. The mosaic in the left arch depicts the motifs night, mourning and a sword, symbolising war
War
War is a state of organized, armed, and often prolonged conflict carried on between states, nations, or other parties typified by extreme aggression, social disruption, and usually high mortality. War should be understood as an actual, intentional and widespread armed conflict between political...
, the one on the right symbolises peace
Peace
Peace is a state of harmony characterized by the lack of violent conflict. Commonly understood as the absence of hostility, peace also suggests the existence of healthy or newly healed interpersonal or international relationships, prosperity in matters of social or economic welfare, the...
by depicting the sun, happiness and flowers. The mosaics are by the sculptor Emil Sutor
Emil Sutor
Emil Sutor was a German sculptor.He was born in Offenburg and died in Karlsruhe.In 1936 he won a gold medal in the art competitions of the Olympic Games for his "Hürdenläufer" .-External links:...
.

Below the triple-aisled 18 m (59 ft) tall nave, there is a crypt
Crypt
In architecture, a crypt is a stone chamber or vault beneath the floor of a burial vault possibly containing sarcophagi, coffins or relics....
, containing a pietà
Pietà
The Pietà is a subject in Christian art depicting the Virgin Mary cradling the dead body of Jesus, most often found in sculpture. As such, it is a particular form of the Lamentation of Christ, a scene from the Passion of Christ found in cycles of the Life of Christ...
by Ruth Schaumann. In the nave, the altar is 2 m above floor level. Above it is a monumental mosaic by Joseph Eberz. It depicts the crucified
Crucifix
A crucifix is an independent image of Jesus on the cross with a representation of Jesus' body, referred to in English as the corpus , as distinct from a cross with no body....
Jesus
Jesus
Jesus of Nazareth , commonly referred to as Jesus Christ or simply as Jesus or Christ, is the central figure of Christianity...
, below him Mary, Mother of Jesus
Mary (mother of Jesus)
Mary , commonly referred to as "Saint Mary", "Mother Mary", the "Virgin Mary", the "Blessed Virgin Mary", or "Mary, Mother of God", was a Jewish woman of Nazareth in Galilee...
, pierced by seven swords.

The organ of the Frauenfriedenskirche was built by the company Siegfried Sauer in Höxter
Höxter
Höxter is the seat of the Höxter district, and a town in eastern North Rhine-Westphalia on the left bank of the river Weser, 52 km north of Kassel in the centre of the Weser Uplands...
in 1996. It has 45 stops
Organ stop
An organ stop is a component of a pipe organ that admits pressurized air to a set of organ pipes. Its name comes from the fact that stops can be used selectively by the organist; some can be "on" , while others can be "off" .The term can also refer...
, electrical tracker action
Tracker action
Tracker action is a term used in reference to pipe organs and steam calliopes to indicate a mechanical linkage between keys or pedals pressed by the organist and the valve that allows air to flow into pipe of the corresponding note...
, three keyboards
Musical keyboard
A musical keyboard is the set of adjacent depressible levers or keys on a musical instrument, particularly the piano. Keyboards typically contain keys for playing the twelve notes of the Western musical scale, with a combination of larger, longer keys and smaller, shorter keys that repeats at the...
and pedals.

Since 1956, the church has had six bells
Church bell
A church bell is a bell which is rung in a church either to signify the hour or the time for worshippers to go to church, perhaps to attend a wedding, funeral, or other service...
.