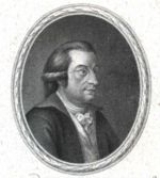 Baron Franz Xaver von Zach (Franz Xaver Freiherr
Freiherr
The German titles Freiherr and Freifrau and Freiin are titles of nobility, used preceding a person's given name or, after 1919, before the surname...
von Zach) (June 4, 1754 – September 2, 1832) was a German astronomer born at Pest
Pest (city)
Pest is the eastern, mostly flat part of Budapest, Hungary, comprising about two thirds of the city's territory. It is divided from Buda, the other part of Budapest, by the Danube River. Among its most notable parts are the Inner City, including the Hungarian Parliament, Heroes' Square and...
in Hungary.

He served for some time in the Austria
Austria
Austria , officially the Republic of Austria , is a landlocked country of roughly 8.4 million people in Central Europe. It is bordered by the Czech Republic and Germany to the north, Slovakia and Hungary to the east, Slovenia and Italy to the south, and Switzerland and Liechtenstein to the...
n army, and afterwards lived in London
London
London is the capital city of :England and the :United Kingdom, the largest metropolitan area in the United Kingdom, and the largest urban zone in the European Union by most measures. Located on the River Thames, London has been a major settlement for two millennia, its history going back to its...
from 1783 to 1786 as tutor in the house of the Saxon
Saxony
The Free State of Saxony is a landlocked state of Germany, contingent with Brandenburg, Saxony Anhalt, Thuringia, Bavaria, the Czech Republic and Poland. It is the tenth-largest German state in area, with of Germany's sixteen states....
ambassador, Hans Moritz von Brühl
Hans Moritz von Brühl
Hans Moritz von Brühl was a German diplomat and astronomer, resident for much of his life in London, where he was known as John Maurice, Count of Brühl.-Life:...
. In 1786 he was appointed by Ernest II, Duke of Saxe-Gotha-Altenburg director of the new observatory on Seeberg hill
Gotha Observatory
Gotha Observatory was a German astronomical observatory located on Seeberg hill near Gotha, Thuringia, Germany...
at Gotha
Gotha (town)
Gotha is a town in Thuringia, within the central core of Germany. It is the capital of the district of Gotha.- History :The town has existed at least since the 8th century, when it was mentioned in a document signed by Charlemagne as Villa Gotaha . Its importance derives from having been chosen in...
, which was finished in 1791. At the close of the 18th century, he organised a group of twenty-four astronomers to prepare for a systematic search for the "missing planet" predicted by the Titius-Bode law
Titius-Bode law
The Titius–Bode law is a hypothesis that the bodies in some orbital systems, including the Sun's, orbit at semi-major axes in a function of planetary sequence...
between Mars
Mars
Mars is the fourth planet from the Sun in the Solar System. The planet is named after the Roman god of war, Mars. It is often described as the "Red Planet", as the iron oxide prevalent on its surface gives it a reddish appearance...
and Jupiter
Jupiter
Jupiter is the fifth planet from the Sun and the largest planet within the Solar System. It is a gas giant with mass one-thousandth that of the Sun but is two and a half times the mass of all the other planets in our Solar System combined. Jupiter is classified as a gas giant along with Saturn,...
. Ceres was discovered by accident just as the search was getting underway. From 1806 Zach accompanied the duke's widow on her travels in the south of Europe
Europe
Europe is, by convention, one of the world's seven continents. Comprising the westernmost peninsula of Eurasia, Europe is generally 'divided' from Asia to its east by the watershed divides of the Ural and Caucasus Mountains, the Ural River, the Caspian and Black Seas, and the waterways connecting...
. He died in Paris
Paris
Paris is the capital and largest city in France, situated on the river Seine, in northern France, at the heart of the Île-de-France region...
in 1832.

Zach published Tables of the Sun (Gotha, 1792; new and improved edition, ibid., 1804), and numerous papers on geographical subjects, particularly on the geographical positions of many towns and places, which he determined on his travels with a sextant
Sextant
A sextant is an instrument used to measure the angle between any two visible objects. Its primary use is to determine the angle between a celestial object and the horizon which is known as the altitude. Making this measurement is known as sighting the object, shooting the object, or taking a sight...
.

His principal importance was, however, as editor of three scientific journals of great value: Allgemeine Geographische Ephemeriden (4 vols., Gotha, 1798-1799), Monatliche Correspondenz zur Beförderung der Erd- und Himmels-Kunde (28 vols., Gotha, 1800-1813, from 1807 edited by Bernhard von Lindenau
Bernhard von Lindenau
Baron Bernhard August von Lindenau was a German lawyer, astronomer, politician, and art collector.Lindenau was born in Altenburg, where he also died. In 1830 he was the Minister of the Interior during a turbulent period in the history of Saxony...
), and (Genoa, 1818-1826, 14 vols., and one number of the 15th, the suppression of which was instigated by the Jesuits
Society of Jesus
The Society of Jesus is a Catholic male religious order that follows the teachings of the Catholic Church. The members are called Jesuits, and are also known colloquially as "God's Army" and as "The Company," these being references to founder Ignatius of Loyola's military background and a...
).

Asteroid 999 Zachia
999 Zachia
999 Zachia is a main-belt asteroid named after Austrian astronomer Franz Xaver von Zach.-External links:*...
and the crater Zach
Zach (crater)
Zach is a lunar impact crater located in the heavily cratered southern sector of the Moon. To the north is the crater Lilius, while to the southeast is Pentland and to the south the larger Curtius. Due to foreshortening, the crater has an oblong appearance when viewed from Earth. The crater is 71...
on the Moon
Moon
The Moon is Earth's only known natural satellite,There are a number of near-Earth asteroids including 3753 Cruithne that are co-orbital with Earth: their orbits bring them close to Earth for periods of time but then alter in the long term . These are quasi-satellites and not true moons. For more...
are named after him, while asteroid 64 Angelina
64 Angelina
64 Angelina is a medium-sized main belt E-type asteroid discovered in 1861. It is an unusually bright form of E-type asteroid.-Discovery and naming:...
is named after an astronomical station he set up near Marseille
Marseille
Marseille , known in antiquity as Massalia , is the second largest city in France, after Paris, with a population of 852,395 within its administrative limits on a land area of . The urban area of Marseille extends beyond the city limits with a population of over 1,420,000 on an area of...
.
The source of this article is wikipedia, the free encyclopedia.  The text of this article is licensed under the GFDL.