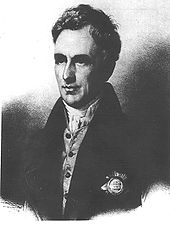 Baron Bernhard August von Lindenau (June 11, 1780 – May 21, 1854) was a German
Germany
Germany , officially the Federal Republic of Germany , is a federal parliamentary republic in Europe. The country consists of 16 states while the capital and largest city is Berlin. Germany covers an area of 357,021 km2 and has a largely temperate seasonal climate...
lawyer
Lawyer
A lawyer, according to Black's Law Dictionary, is "a person learned in the law; as an attorney, counsel or solicitor; a person who is practicing law." Law is the system of rules of conduct established by the sovereign government of a society to correct wrongs, maintain the stability of political...
, astronomer
Astronomer
An astronomer is a scientist who studies celestial bodies such as planets, stars and galaxies.Historically, astronomy was more concerned with the classification and description of phenomena in the sky, while astrophysics attempted to explain these phenomena and the differences between them using...
, politician, and art collector.

Lindenau was born in Altenburg
Altenburg
Altenburg is a town in the German federal state of Thuringia, 45 km south of Leipzig. It is the capital of the Altenburger Land district.-Geography:...
, where he also died. In 1830 he was the Minister of the Interior during a turbulent period in the history of Saxony. Late in the year he oversaw measures to calm violent protests demanding political reform.

He created a collection of Italian artwork from the 14th and 15th centuries by Florentine painters in an effort to create artistic awareness. He gave his art collection to the city of Altenburg on the condition that they create a museum to display the pieces. This museum was finished in 1875, and became the Lindenau-Museum
Lindenau-Museum
The Lindenau-Museum is an art museum in Altenburg, Thuringia, Germany.The museum originated as the house-museum of baron and collector Bernhard August von Lindenau. The building was completed in 1876....
.

Lindenau edited the Monatliche Correspondenz zur Beförderung der Erd- und Himmels-Kunde starting in 1807. The Journal was founded by Franz Xaver von Zach in 1800 and existed until 1813.