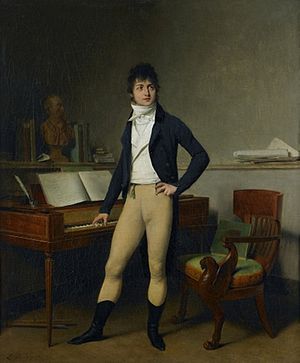 François-Adrien Boieldieu (fʁɑ̃.swa a.dʁiɛ̃ bwa.ɛld.jø) (16 December 1775, Rouen
Rouen
Rouen , in northern France on the River Seine, is the capital of the Haute-Normandie region and the historic capital city of Normandy. Once one of the largest and most prosperous cities of medieval Europe , it was the seat of the Exchequer of Normandy in the Middle Ages...
8 October 1834, Varennes-Jarcy
Varennes-Jarcy
Varennes-Jarcy ) is a commune in the Essonne department in northern France, located between Périgny and Combs-la-Ville 25 km from the center of Paris.Inhabitants of Varennes-Jarcy are known as Varennois....
, Essonne
Essonne
Essonne is a French department in the region of Île-de-France. It is named after the Essonne River.It was formed on 1 January 1968 when Seine-et-Oise was split into smaller departments.- History :...
) was a French
France
The French Republic , The French Republic , The French Republic , (commonly known as France , is a unitary semi-presidential republic in Western Europe with several overseas territories and islands located on other continents and in the Indian, Pacific, and Atlantic oceans. Metropolitan France...
composer
Composer
A composer is a person who creates music, either by musical notation or oral tradition, for interpretation and performance, or through direct manipulation of sonic material through electronic media...
, mainly of opera
Opera
Opera is an art form in which singers and musicians perform a dramatic work combining text and musical score, usually in a theatrical setting. Opera incorporates many of the elements of spoken theatre, such as acting, scenery, and costumes and sometimes includes dance...
s, often called "the French Mozart".

Born under the Ancien Régime in Rouen
Rouen
Rouen , in northern France on the River Seine, is the capital of the Haute-Normandie region and the historic capital city of Normandy. Once one of the largest and most prosperous cities of medieval Europe , it was the seat of the Exchequer of Normandy in the Middle Ages...
, Adrien Boieldieu received his musical education first from the choirmaster and then from the organist of the local cathedral
Rouen Cathedral
Rouen Cathedral is a Roman Catholic Gothic cathedral in Rouen, in northwestern France. It is the seat of the Archbishop of Rouen and Normandy.-History:...
. During the Reign of Terror
Reign of Terror
The Reign of Terror , also known simply as The Terror , was a period of violence that occurred after the onset of the French Revolution, incited by conflict between rival political factions, the Girondins and the Jacobins, and marked by mass executions of "enemies of...
, Rouen was one of the few towns to maintain a significant musical life and in 1793 a series of concerts was organised featuring the celebrated violinist Pierre Rode
Pierre Rode
Jacques Pierre Joseph Rode was a French violinist and composer.-Biography:Born in Bordeaux, Aquitaine, France, Pierre Rode traveled to Parisat the age of 13 and soon became a favourite pupil of the great Giovanni Battista Viotti who found the boy so talented that he charged him no fee for the...
and the tenor Pierre-Jean Garat. It was during this time that Boieldieu composed his earliest works to texts written by his father (La fille coupable in 1793, followed by Rosalie et Mirza in 1795). They brought him immediate success.

During the Revolutionary period, Boieldieu left for Paris
Paris
Paris is the capital and largest city in France, situated on the river Seine, in northern France, at the heart of the Île-de-France region...
and wisely started work as a piano tuner. At this time, the Opéra-Comique
Opéra-Comique
The Opéra-Comique is a Parisian opera company, which was founded around 1714 by some of the popular theatres of the Parisian fairs. In 1762 the company was merged with, and for a time took the name of its chief rival the Comédie-Italienne at the Hôtel de Bourgogne, and was also called the...
was the only theatre to offer opportunities for the hybrid works of the same name, close to classic opera, but containing spoken dialogue. The most typical work of the genre was Luigi Cherubini
Luigi Cherubini
Luigi Cherubini was an Italian composer who spent most of his working life in France. His most significant compositions are operas and sacred music. Beethoven regarded Cherubini as the greatest of his contemporaries....
's Médée
Médée (Cherubini)
Médée is a French language opéra-comique by Luigi Cherubini.The libretto by François-Benoît Hoffmann was based on Euripides' tragedy of Medea and Pierre Corneille's play Médée....
(1797). Opéra-comique, traditionally performed at the Salle Favart, was also staged at the Théâtre de Monsieur from 1789. In 1791, the company set up home in a new theatre, the Théâtre Feydeau
Théâtre Feydeau
The Théâtre Feydeau, , a former Parisian theatre company, was founded in 1789 with the patronage of Monsieur, Comte de Provence , and was therefore initially named the Théâtre de Monsieur...
, previously reserved for the troupe of the opera buffa
Opera buffa
Opera buffa is a genre of opera. It was first used as an informal description of Italian comic operas variously classified by their authors as ‘commedia in musica’, ‘commedia per musica’, ‘dramma bernesco’, ‘dramma comico’, ‘divertimento giocoso' etc...
. Over the course of ten years, the Favart and the Feydeau companies were rivals, the Favart beefing up its repertoire of patriotic spectacles and presenting the lighter works of Étienne Méhul
Étienne Méhul
Etienne Nicolas Méhul was a French composer, "the most important opera composer in France during the Revolution." He was also the first composer to be called a "Romantic".-Life:...
, the Feydeau offering the heroic dramas of Cherubini or Jean-François Le Sueur
Jean-François Le Sueur
Jean-François Le Sueur was a French composer, best known for his oratorios and operas.-Life:...
. In 1797, Boieldieu offered the Feydeau La famille suisse and L'heureuse nouvelle. In 1798, he presented the Favart with Zoraime et Zulmare, which brought him extraordinary success.

The spiritual heir of André Grétry, Boieldieu focussed on melodies which avoided too much ornamentation, set to light but intelligent orchestration. Hector Berlioz
Hector Berlioz
Hector Berlioz was a French Romantic composer, best known for his compositions Symphonie fantastique and Grande messe des morts . Berlioz made significant contributions to the modern orchestra with his Treatise on Instrumentation. He specified huge orchestral forces for some of his works; as a...
described his music as possessing "a pleasing and tasteful Parisian elegance". In 1800, he scored a veritable triumph with Le calife de Bagdad. In 1804, following the breakdown of his marriage to the dancer Clotilde Mafleurai, he set off for Saint Petersburg
Saint Petersburg
Saint Petersburg is a city and a federal subject of Russia located on the Neva River at the head of the Gulf of Finland on the Baltic Sea...
to take up the post of court composer to the tsar, where he stayed until 1810. There he composed nine operas, including Aline, reine de Golconde (1804) et Les voitures versées (1808). On his return to France he won back Parisian audiences with La jeune femme en colère (1811), Jean de Paris (1812), Le nouveau seigneur du village (1813) and a dozen other works. 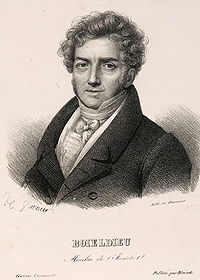 In 1825 he produced his masterpiece, La dame blanche
La Dame blanche
La dame blanche is an opéra comique in three acts by the French composer François-Adrien Boieldieu. The libretto was written by Eugène Scribe and is based on episodes from no less than five of the works by Scottish writer Sir Walter Scott, including his novels The Monastery, Guy Mannering, and The...
(revived in the Salle Favart in 1997 and recorded by the conductor Marc Minkowski
Marc Minkowski
Marc Minkowski is a French conductor of classical music, especially known for his interpretations of French Baroque works. His mother is American, and his father was Alexandre Minkowski, a Polish-French professor of pediatrics and one of the founders of neonatology...
). Unusual for the time, La dame blanche was based on episodes from two novels by Walter Scott
Walter Scott
Sir Walter Scott, 1st Baronet was a Scottish historical novelist, playwright, and poet, popular throughout much of the world during his time....
. The libretto by Eugène Scribe
Eugène Scribe
Augustin Eugène Scribe , was a French dramatist and librettist. He is best known for the perfection of the so-called "well-made play" . This dramatic formula was a mainstay of popular theater for over 100 years.-Biography:...
is built around the theme of the long lost child fortunately recognized at a moment of peril. The style of the opera influenced Lucia di Lammermoor, I puritani and La jolie fille de Perth. La dame blanche was one of the first attempts to introduce the fantastic into opera.

Although his reputation is largely based upon his operas, Boieldieu also composed other works. Among them was his Harp Concerto in C, written in 1800-1801 and one of the masterpieces of the harp repertory.

Boieldieu became professor of composition at the Paris Conservatoire and in 1817 he succeeded Méhul as one of the forty members of the Académie des Beaux-Arts
Académie des beaux-arts
The Académie des Beaux-Arts is a French learned society. It is one of the five academies of the Institut de France.It was created in 1795 as the merger of the:* Académie de peinture et de sculpture...
. He received the Légion d'honneur
Légion d'honneur
The Legion of Honour, or in full the National Order of the Legion of Honour is a French order established by Napoleon Bonaparte, First Consul of the Consulat which succeeded to the First Republic, on 19 May 1802...
in 1820.

Boieldieu gradually lost the ability to speak, no doubt due to cancer of the larynx. The bankruptcy of the Opéra-Comique and the revolution of 1830 added to his woes. To save him from poverty, Adolphe Thiers
Adolphe Thiers
Marie Joseph Louis Adolphe Thiers was a French politician and historian. was a prime minister under King Louis-Philippe of France. Following the overthrow of the Second Empire he again came to prominence as the French leader who suppressed the revolutionary Paris Commune of 1871...
awarded him a state pension of 6,000 francs. On September 25, 1834, he made his last public appearance at the premiere of Adolphe Adam
Adolphe Adam
Adolphe Charles Adam was a French composer and music critic. A prolific composer of operas and ballets, he is best known today for his ballets Giselle and Le corsaire , his operas Le postillon de Lonjumeau , Le toréador and Si j'étais roi , and his Christmas...
's Le chalet. In this way, he stylishly passed on the baton to his brilliant pupil.

He was survived by an illegitimate son (Adrien) Louis (Victor) (1815–83), mother Thérèse Regnault; he was also a composer.