Encyclopedia
Fréjus is a commune
Communes of France
The commune is the lowest level of administrative division in the French Republic. French communes are roughly equivalent to incorporated municipalities or villages in the United States or Gemeinden in Germany...
in the Var
Var (département)
The Var is a French department in the region Provence-Alpes-Côte d'Azur in Provence, in southeast France. It takes its name from the river Var, which used to flow along its eastern boundary, but the boundary was moved in 1860...
department in the Provence-Alpes-Côte d'Azur
Provence-Alpes-Côte d'Azur
Provence-Alpes-Côte d'Azur or PACA is one of the 27 regions of France.It is made up of:* the former French province of Provence* the former papal territory of Avignon, known as Comtat Venaissin...
region
Régions of France
France is divided into 27 administrative regions , 22 of which are in Metropolitan France, and five of which are overseas. Corsica is a territorial collectivity , but is considered a region in mainstream usage, and is even shown as such on the INSEE website...
in southeastern France
France
The French Republic , The French Republic , The French Republic , (commonly known as France , is a unitary semi-presidential republic in Western Europe with several overseas territories and islands located on other continents and in the Indian, Pacific, and Atlantic oceans. Metropolitan France...
.

It neighbours Saint-Raphaël
Saint-Raphaël, Var
Saint-Raphaël is a commune in the Var department in the Provence-Alpes-Côte d'Azur region in southeastern France.Immediately to the west of Saint-Raphaël lies another, older, town called Fréjus, and together they form an urban agglomeration known as Fréjus Saint-Raphaël...
, effectively forming one town. The north of the commune forms part of the Estérel Massif
Esterel massif
The Esterel Massif is a coastal mountain range in the departments of Var and Alpes-Maritimes in Provence, south-east France....
.

On 2 December 1959, the Malpasset Dam, on the Reyran river above Fréjus, ruptured, killing over 400 people. 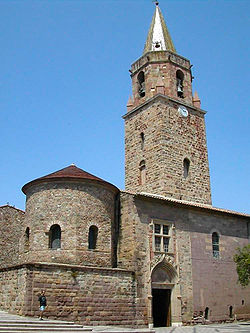 Fréjus contains a medieval city as well as a popular seaside resort. Created by the Romans, it attracts many tourists because of its history, cultural and artistic qualities, its well maintained beaches, the sea and sporting facilities. There are numerous places of interest in the area, all are reasonably accessible from Fréjus because of its convenient location. The history of city is very similar to that of Provence. It was destroyed many times in spite of the presence of the Roman Legions. In 49 B.C., Julius Caesar
Julius Caesar
Gaius Julius Caesar was a Roman general and statesman and a distinguished writer of Latin prose. He played a critical role in the gradual transformation of the Roman Republic into the Roman Empire....
decided to have the Adrian Way built linking Italy with Spain. In those days the Phoenicians of Marseille
Marseille
Marseille , known in antiquity as Massalia , is the second largest city in France, after Paris, with a population of 852,395 within its administrative limits on a land area of . The urban area of Marseille extends beyond the city limits with a population of over 1,420,000 on an area of...
had already set up a colony on the site, but it was the Roman emperor who gave the port its prosperity and the city its name of 'Forum Julii' meaning 'market of Julius;' he also named its port 'Claustra Maris' (The sea bolt). It went on to become one of the most important ports in the Mediterranean, until the Pax Romana
Pax Romana
Pax Romana was the long period of relative peace and minimal expansion by military force experienced by the Roman Empire in the 1st and 2nd centuries AD. Since it was established by Caesar Augustus it is sometimes called Pax Augusta...
, by denying Forum Julii its military activity, marked the beginning of its decline. The decay of Rome led to that of the cities of its empire. Between the 7th and the 9th centuries, Muslim invaders repeatedly raided the city. The sea encroached on the land while invasions by the Muslims and pirates left the monuments in ruin. By the 10th century there was very little left of the colony, mostly rubble. Sea-borne silt clogged up the port and led to the formation of a huge swampy plain, which then separated the village from the sea.

The church of St. Maximinus, begun towards the end of the thirteenth century by Charles II of Sicily
Charles II of Naples
Charles II, known as "the Lame" was King of Naples, King of Albania, Prince of Salerno, Prince of Achaea and Count of Anjou.-Biography:...
and completed by the end of the fifteenth century, an example of pointed architecture in the south of France. The head of St. Mary Magdalen is honoured here, and the crypt contains tombs which date from the first centuries of the Christian Era.

Forum Julii still has a lot of its ruins and an exceptional archaeological value. There's the Roman Amphitheatre, arcades of the Oree Gate, and remains of the Aqueduct arches. There is also the Cathedral, Chapel Jean Cocteau, Aurelienne's villa and Aurelien's park. The rhythm and mood still lives on today with many exhibitions, theatre and classical music events.

Keeping up with its many traditions and artistic activities, Fréjus organises several fairs throughout the year. There is the pottery fair and the Bravade (street market bargains), in and amongst its Roman and Gothic architecture with the 'old tile' roof tops and tinted walls. Everything blends in happily with the recently developed port and its neo palladian design and carefully selected Provençal colours which give it a unique identity. Port Fréjus which has a capacity of 750 moorings, is surrounded by beautiful fine sandy beaches. The town is very conscious of its natural heritage. As a backdrop there is the massif de l'Esterel
Esterel massif
The Esterel Massif is a coastal mountain range in the departments of Var and Alpes-Maritimes in Provence, south-east France....
, the (Esterel hills) and its 'Nature' base situated on the sea edge, as well as protecting the area and its environment. Many sporting events are held here. There's the well-known annual 'Roc Azur' mountain bike event which is completely open to everyone of all ages.
There are plenty of walks to enjoy and strongly recommended is to see the infamous Barrage de Malpasset dam, which in 1959 burst partly destroying the town, uprooting everything in its path and causing 421 deaths. Only the ancient monuments withstood the torrent. Along the length of the dam's remains, all sorts of Mediterranean flora can be found such as heather, pine, oak and wild strawberry trees (Arbousiers).

The Gare de Fréjus
Gare de Fréjus
Gare de Fréjus is a railway station serving Fréjus, Var department, southeastern France. It is situated on the Marseille–Ventimiglia railway.The following services call at Fréjus:*night services Paris - Toulon - Nice-References:*...
train station offers connections to Toulon, Nice and several regional destinations. Long distance destinations are accessible from the nearby Gare de Saint-Raphaël-Valescure. The A8
A8 autoroute
The A8 autoroute, La Provençale, is a -long highway in France between Aix-en-Provence and the A7 to the Côte d'Azur.- Route :The A8 is an extension of the A7 starting to the west of Aix-en-Provence at La Fare-les-Oliviers. The road passes through the Departments of Bouches-du-Rhône, Var and...
motorway connects Fréjus with Aix-en-Provence and Nice.

Fréjus is twinned
Town twinning
Twin towns and sister cities are two of many terms used to describe the cooperative agreements between towns, cities, and even counties in geographically and politically distinct areas to promote cultural and commercial ties.- Terminology :...
with: Fredericksburg
Fredericksburg, Virginia
Fredericksburg is an independent city in the Commonwealth of Virginia located south of Washington, D.C., and north of Richmond. As of the 2010 census, the city had a population of 24,286...
, USA Triberg, Germany
Germany
Germany , officially the Federal Republic of Germany , is a federal parliamentary republic in Europe. The country consists of 16 states while the capital and largest city is Berlin. Germany covers an area of 357,021 km2 and has a largely temperate seasonal climate...
Dumbéa
Dumbéa
Dumbéa is a commune in the suburbs of Nouméa in the South Province of New Caledonia, an overseas territory of France in the Pacific Ocean.-Twin towns: Fréjus, France, since 1985 Punaauia, France, since 1991 Bessières, France Lifou, New Caledonia...
, France
France
The French Republic , The French Republic , The French Republic , (commonly known as France , is a unitary semi-presidential republic in Western Europe with several overseas territories and islands located on other continents and in the Indian, Pacific, and Atlantic oceans. Metropolitan France...
Paola, Italy
Italy
Italy , officially the Italian Republic languages]] under the European Charter for Regional or Minority Languages. In each of these, Italy's official name is as follows:;;;;;;;;), is a unitary parliamentary republic in South-Central Europe. To the north it borders France, Switzerland, Austria and...
Tabarka
Tabarka
Tabarka is a coastal town located in north-western Tunisia, at about , close to the border with Algeria. It has been famous for its coral fishing, the Coral Festival of underwater photography and the annual jazz festival. Tabarka's history is a colorful mosaic of Phoenician, Roman, Arabic and...
, Tunisia
Tunisia
Tunisia , officially the Tunisian RepublicThe long name of Tunisia in other languages used in the country is: , is the northernmost country in Africa. It is a Maghreb country and is bordered by Algeria to the west, Libya to the southeast, and the Mediterranean Sea to the north and east. Its area...