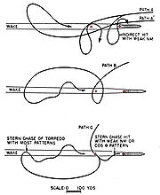 Encyclopedia
Foxer, was the codename for a British
United Kingdom
The United Kingdom of Great Britain and Northern IrelandIn the United Kingdom and Dependencies, other languages have been officially recognised as legitimate autochthonous languages under the European Charter for Regional or Minority Languages...
built acoustic decoy
Decoy
A decoy is usually a person, device or event meant as a distraction, to conceal what an individual or a group might be looking for. Decoys have been used for centuries most notably in game hunting, but also in wartime and in the committing or resolving of crimes.-Duck decoy:The term duck decoy may...
, used to confuse German
Germany
Germany , officially the Federal Republic of Germany , is a federal parliamentary republic in Europe. The country consists of 16 states while the capital and largest city is Berlin. Germany covers an area of 357,021 km2 and has a largely temperate seasonal climate...
acoustic homing torpedo
Torpedo
The modern torpedo is a self-propelled missile weapon with an explosive warhead, launched above or below the water surface, propelled underwater towards a target, and designed to detonate either on contact with it or in proximity to it.The term torpedo was originally employed for...
es like the G7es torpedo
G7es torpedo
The G7es or Zaunkönig T-5 was a torpedo employed by German U-boats during World War II. It was known as the GNAT to the British.- Description :...
during the Second World War. A US version codenamed FXR was deployed in 1943. A Canadian
Canada
Canada is a North American country consisting of ten provinces and three territories. Located in the northern part of the continent, it extends from the Atlantic Ocean in the east to the Pacific Ocean in the west, and northward into the Arctic Ocean...
version was also built called the CAT (Counter-Acoustic Torpedo). It was replaced in US service by the Fanfare
Fanfare (decoy)
The T-Mk 6 Fanfare is a towed sonar decoy developed after the Second World War by the United States Navy. It replaced the Foxer noisemaker. It was more effective than the Foxer, producing a sound similar to a ship's propeller, rather than wideband noise....
noisemaker.

The device consisted of one or two noise making devices towed several hundred metres behind the ship. The noise makers mechanically generated huge amounts of noise, far more than produced by the ship itself. This noise seduced the simple guidance mechanisms of acoustic torpedoes away from the rear of the ship into a circling pattern around the noise maker until the torpedo ran out of fuel. 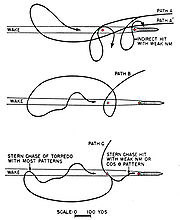 By 1943 Allied
Allies of World War II
The Allies of World War II were the countries that opposed the Axis powers during the Second World War . Former Axis states contributing to the Allied victory are not considered Allied states...
intelligence sources indicated that Germany had produced a passive acoustic homing torpedo, which homed on the sound produced by a ship's propeller
Propeller
A propeller is a type of fan that transmits power by converting rotational motion into thrust. A pressure difference is produced between the forward and rear surfaces of the airfoil-shaped blade, and a fluid is accelerated behind the blade. Propeller dynamics can be modeled by both Bernoulli's...
as it moved through the water. To counter this threat various countermeasures were considered. There was already a towed noise maker developed to mine-sweep for acoustic mines, consisting of two steel bars fixed parallel, with a gap between them to allow water to flow between, and towed perpendicular to the flow of water. The water flowing between the two bars caused them to flex and bang together generating far more noise than the towing ship above 1kHz. This noisemaker produced around 20 decibel
Decibel
The decibel is a logarithmic unit that indicates the ratio of a physical quantity relative to a specified or implied reference level. A ratio in decibels is ten times the logarithm to base 10 of the ratio of two power quantities...
s more noise than the towing ship, and would last for around 25 hours when towed at 12 knots.

The US developed this existing noise-maker into the FXR, which was to be towed singly around 500 feet behind the ship. This entered production by July 1943. The single noise-maker however would only work effectively if the torpedo was equally sensitive to sounds from both the front and rear. If a torpedo passed directly over the noise-maker from the rear the ship itself would be directly ahead, if the torpedo had a reduced sensitivity to noise from behind, it might ignore the greater output from the noise-maker, and proceed to home on the ship.

After successful attacks on ships in Convoy ONS 18 and Convoy ON 22 in which nine ships were sunk, more detailed studies were begun into the torpedo behaviour. These studies revealed that against a torpedo with reduced sensitivity to the rear (described by its sensitivity pattern as a Cosθ torpedo), a single towed noise-maker would not be sufficiently effective.

The Foxer consisted of one or more 3,000 lb (1,360 kg) arrangements of hollow metal pipes with holes cut in them. These were towed through the water about 200 m (218.7 yd) behind the boat. The water rushing through the holes and the pipes banging together created cavitation
Cavitation
Cavitation is the formation and then immediate implosion of cavities in a liquidi.e. small liquid-free zones that are the consequence of forces acting upon the liquid...
noise, much greater than that coming from the ship's propeller. This worked because the German homing torpedoes were tuned to home in on the sound frequencies generated by cavitation, and to home in on the loudest cavitation sound.

The Germans U-boat crews called it the circular saw or Rattatelboje (rattle buoy
Buoy
A buoy is a floating device that can have many different purposes. It can be anchored or allowed to drift. The word, of Old French or Middle Dutch origin, is now most commonly in UK English, although some orthoepists have traditionally prescribed the pronunciation...
), estimated the volume of noise generated by Foxer at 10 to 100 times greater than that generated by a ship.

The limitations of the system were that it could not be towed faster than 14 knots (26 km/h) and because of the noise it effectively rendered the towing ship's sonar
Sonar
Sonar is a technique that uses sound propagation to navigate, communicate with or detect other vessels...
useless. The drums also wore out quickly and the sound could be heard underwater over a long distance giving away the position of the towing ship to U-boats searching for convoy
Convoy
A convoy is a group of vehicles, typically motor vehicles or ships, traveling together for mutual support and protection. Often, a convoy is organized with armed defensive support, though it may also be used in a non-military sense, for example when driving through remote areas.-Age of Sail:Naval...
s.

In the closing stages of the war the Germans developed the T11 Zaunkoenig II
T11 torpedo
The T11 was a torpedo developed for German U-boats during World War II. The torpedo was electric and had an effective range of 5,700 meters at a speed of 24 knots . This torpedo employed acoustic, passive homing to find its target after a straight run of 400 meters. This evolution of the G7es...
. It was designed to ignore towed decoys and noisemakers. However, it was never fired.