Fort St George is the name of the first English
English colonial empire
The English colonial empire consisted of a variety of overseas territories colonized, conquered, or otherwise acquired by the former Kingdom of England between the late 16th and early 18th centuries....
(later British
Kingdom of Great Britain
The former Kingdom of Great Britain, sometimes described as the 'United Kingdom of Great Britain', That the Two Kingdoms of Scotland and England, shall upon the 1st May next ensuing the date hereof, and forever after, be United into One Kingdom by the Name of GREAT BRITAIN. was a sovereign...
) fortress in India
India
India , officially the Republic of India , is a country in South Asia. It is the seventh-largest country by geographical area, the second-most populous country with over 1.2 billion people, and the most populous democracy in the world...
, founded in 1639 at the coastal city of Madras, the modern city of Chennai
Chennai
Chennai , formerly known as Madras or Madarasapatinam , is the capital city of the Indian state of Tamil Nadu, located on the Coromandel Coast off the Bay of Bengal. Chennai is the fourth most populous metropolitan area and the sixth most populous city in India...
. The construction of the Fort provided the impetus for further settlements and trading activity, in what was originally a no man's land. Thus, it is a feasible contention to say that the city evolved around the fortress.

The East India Company
East India Company
The East India Company was an early English joint-stock company that was formed initially for pursuing trade with the East Indies, but that ended up trading mainly with the Indian subcontinent and China...
, which had entered India around 1600 for trading activities, had begun licensed trading at Surat
Surat
Surat , also known as Suryapur, is the commercial capital city of the Indian state of Gujarat. Surat is India's Eighth most populous city and Ninth-most populous urban agglomeration. It is also administrative capital of Surat district and one of the fastest growing cities in India. The city proper...
, which was its initial bastion. However, to secure its trade lines and commercial interests in the spice trade
Spice trade
Civilizations of Asia were involved in spice trade from the ancient times, and the Greco-Roman world soon followed by trading along the Incense route and the Roman-India routes...
, it felt the necessity of a port closer to the Malaccan Straits, and succeeded in purchasing a piece of coastal land, originally called Chennirayarpattinam or Channapatnam, from a Vijayanagar
Vijayanagara Empire
The Vijayanagara Empire , referred as the Kingdom of Bisnaga by the Portuguese, was an empire based in South Indian in the Deccan Plateau region. It was established in 1336 by Harihara I and his brother Bukka Raya I of the Yadava lineage. The empire rose to prominence as a culmination of attempts...
chieftain named Damerla Chennappa Nayaka based in Chandragiri
Chandragiri
Chandragiri , is a suburb of Tirupati in Andhra Pradesh, India. Recently it is included under Municipal Corporation limits of Tirupati...
, where the Company began the construction of a harbour and a fort. The fort was completed on April 23, coinciding with St George's Day
Saint George
Saint George was, according to tradition, a Roman soldier from Syria Palaestina and a priest in the Guard of Diocletian, who is venerated as a Christian martyr. In hagiography Saint George is one of the most venerated saints in the Catholic , Anglican, Eastern Orthodox, and the Oriental Orthodox...
, celebrated in honour of the patron saint of England
England
England is a country that is part of the United Kingdom. It shares land borders with Scotland to the north and Wales to the west; the Irish Sea is to the north west, the Celtic Sea to the south west, with the North Sea to the east and the English Channel to the south separating it from continental...
. The fort, hence christened Fort St George, faced the sea and some fishing villages, and it soon became the hub of merchant activity. It gave birth to a new settlement area called George Town
George Town, Chennai
George Town is a historical neighbourhood of Fort St. George in Chennai , India. Also known as Black Town during the colonial period, the settlement was formed after the English constructed the fort and was the first settlement of the city of Madras, begun soon after the completion of the...
(historically referred to as Black Town), which grew to envelop the villages and led to the formation of the city of Madras. It also helped to establish English
Kingdom of England
The Kingdom of England was, from 927 to 1707, a sovereign state to the northwest of continental Europe. At its height, the Kingdom of England spanned the southern two-thirds of the island of Great Britain and several smaller outlying islands; what today comprises the legal jurisdiction of England...
influence over the Carnatic and to keep the kings of Arcot and Srirangapatna
Srirangapatna
Srirangapatna is a town in Mandya district of the Indian state of Karnataka...
, as well as the French
France
The French Republic , The French Republic , The French Republic , (commonly known as France , is a unitary semi-presidential republic in Western Europe with several overseas territories and islands located on other continents and in the Indian, Pacific, and Atlantic oceans. Metropolitan France...
forces based at Pondicherry, at bay.

The Fort now serves as the administrative headquarters for the legislative assembly
Legislature of Tamil Nadu
The Tamil Nadu Legislative Assembly is the sole house of the unicameral Tamil Nadu Legislature. The Tamil Nadu Legislative Assembly alone has powers to legislate laws covering state subjects in the Indian state of Tamil Nadu. It has a strength of 235 members of whom 234 are democratically elected...
of Tamil Nadu
Tamil Nadu
Tamil Nadu is one of the 28 states of India. Its capital and largest city is Chennai. Tamil Nadu lies in the southernmost part of the Indian Peninsula and is bordered by the union territory of Pondicherry, and the states of Kerala, Karnataka, and Andhra Pradesh...
state and it still houses a garrison of troops in transit to various locations at South India and the Andamans. The Fort Museum contains many relics of the Raj
British Raj
British Raj was the British rule in the Indian subcontinent between 1858 and 1947; The term can also refer to the period of dominion...
era, including portraits of many of the Governors of Madras
Governors of Madras
-English Agents:In 1639, the grant of Madras to the English was finalized between the factors of the Masulipatnam factory, represented by Francis Day, and the Raja of Chandragiri. In 1640, Andrew Cogan, the chief of the Masulipatnam factory, made his way to Madras in the company of Francis Day and...
. 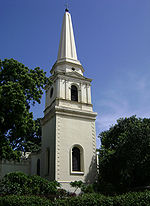 St. Mary's Church is the oldest Anglican
Anglicanism
Anglicanism is a tradition within Christianity comprising churches with historical connections to the Church of England or similar beliefs, worship and church structures. The word Anglican originates in ecclesia anglicana, a medieval Latin phrase dating to at least 1246 that means the English...
church in India. It was built between 1678 and 1680. The tombstones in its graveyard are the oldest English or British tombstones in India. This ancient prayer house solemnized the marriages of Robert Clive and Governor Elihu Yale
Elihu Yale
Elihu Yale was a Welsh merchant and philanthropist, governor of the East India Company, and a benefactor of the Collegiate School of Connecticut, which in 1718 was named Yale College in his honour.- Life :...
, who later became the first benefactor of Yale University
Yale University
Yale University is a private, Ivy League university located in New Haven, Connecticut, United States. Founded in 1701 in the Colony of Connecticut, the university is the third-oldest institution of higher education in the United States...
in the United States. The church is popularly known as the 'Westminster Abbey of the East'.

The Fort Museum exhibits many items of the period of English and later British rule. This building was completed in 1795 and first housed the office of the Madras Bank. The hall upstairs was the Public Exchange Hall and served as a place for public meetings, lottery draws and occasional entertainment. These relics are reminders of British rule in India. The objects on display in the museum are the weapons, coins, medals, uniforms and other artifacts from England, Scotland, France and India dating back to the colonial period. Original letters written by Clive and Cornwallis make fascinating reading. One set of quaint period uniforms is displayed for viewing, as well. However, the piece de resistance is a large statue of Lord Cornwallis.

The first floor of the building includes the Banqueting Hall, which holds paintings of the Governor of the Fort and other high officials of the Regime. The cannons of Tipu Sultan
Tipu Sultan
Tipu Sultan , also known as the Tiger of Mysore, was the de facto ruler of the Kingdom of Mysore. He was the son of Hyder Ali, at that time an officer in the Mysorean army, and his second wife, Fatima or Fakhr-un-Nissa...
decorate the ramparts of the museum. The 14.5 ft statue stands at the entrance near a stairway in the museum. This statue was created by Charles Bank in England to be brought to India. The pedestal of the statue is carved with a scene depicting Tipu Sultan's emissary handing over Tipu's two sons as hostage in lieu of a ransom he was unable to pay to the British. It takes its name from Richard Wellesley, Governor General of India, and brother of the Duke of Wellington
Duke of Wellington
The Dukedom of Wellington, derived from Wellington in Somerset, is a hereditary title in the senior rank of the Peerage of the United Kingdom. The first holder of the title was Arthur Wellesley, 1st Duke of Wellington , the noted Irish-born career British Army officer and statesman, and...
.