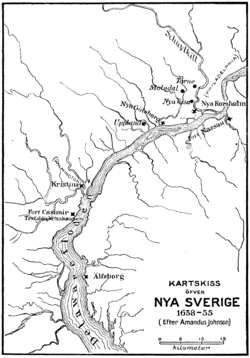 Fort Nya Elfsborg was a fortification and settlement established as a part of New Sweden
New Sweden
New Sweden was a Swedish colony along the Delaware River on the Mid-Atlantic coast of North America from 1638 to 1655. Fort Christina, now in Wilmington, Delaware, was the first settlement. New Sweden included parts of the present-day American states of Delaware, New Jersey, and Pennsylvania....
. Built in 1643 and named after the Älvsborg Fortress
Älvsborg Fortress
Älvsborg, also Elfsborg Fortress, is a sea fortress located in today's Gothenburg , Sweden. Situated on the mouth of the Göta Älv river, it served to protect Sweden's access to the Atlantic Ocean and the nearby settlement of today's Gothenburg and its four predecessors. The fortress was relocated...
off Gothenburg
Gothenburg
Gothenburg is the second-largest city in Sweden and the fifth-largest in the Nordic countries. Situated on the west coast of Sweden, the city proper has a population of 519,399, with 549,839 in the urban area and total of 937,015 inhabitants in the metropolitan area...
, Fort Nya Elfsborg was located on the New Jersey
New Jersey
New Jersey is a state in the Northeastern and Middle Atlantic regions of the United States. , its population was 8,791,894. It is bordered on the north and east by the state of New York, on the southeast and south by the Atlantic Ocean, on the west by Pennsylvania and on the southwest by Delaware...
side of the Delaware River
Delaware River
The Delaware River is a major river on the Atlantic coast of the United States.A Dutch expedition led by Henry Hudson in 1609 first mapped the river. The river was christened the South River in the New Netherland colony that followed, in contrast to the North River, as the Hudson River was then...
, between present day Salem
Salem, New Jersey
Salem is a city in Salem County, New Jersey, United States. As of the United States 2010 Census, the city population was 5,146. It is the county seat of Salem County, the most rural county in the state of New Jersey. The name Salem is related to the Hebrew word shalom, meaning "peace".The town and...
and Alloway Creek
Alloway Creek
Alloway Creek is a tributary of the Delaware River in Salem County, southwestern New Jersey in the U.S.The headwaters of the creek are to the southeast of Daretown, in Upper Pittsgrove Township. It flows roughly parallel and to the south of Commissioners Pike, meeting Cool Run before turning west...
.

Fort Nya Elfsborg was built shortly after Johan Printz, governor of New Sweden, arrived in the colony on 15 February 1643. He also built Fort Nya Gothenborg on Tinicum Island
Tinicum Township, Delaware County, Pennsylvania
Tinicum Township, more popularly known as "Tinicum Island" or "The Island", a census-designated place and township in Delaware County, Pennsylvania, United States. The population was 4,353 at the 2000 census. Included within the township's boundaries are the communities of Essington and Lester...
(to the immediate SW of today's Philadelphia), where he built his own manor house which he called The Printzhof
The Printzhof
The Printzhof, located in Governor Printz Park in Essington, Pennsylvania, was the home of Johan Björnsson Printz, governor of New Sweden....
. Fort Nya Elfsborg had iron and brass 12pd cannons mounted on earth and wooden palisades. It was a Swedish style three-cornered earthen redoubt with eight guns. Log farmsteads similar to those found in Sweden went up around the fort further downriver, so that Dutch West India Company
New Netherland
New Netherland, or Nieuw-Nederland in Dutch, was the 17th-century colonial province of the Republic of the Seven United Netherlands on the East Coast of North America. The claimed territories were the lands from the Delmarva Peninsula to extreme southwestern Cape Cod...
ships coming up from the bay would have to get by them first.

At that time, this area of the river was mostly swamp and the soldiers garrisoned there were inundated by mosquitos. Fort Mosquito( Fort Myggenborgh), as it was commonly nicknamed, was eventually abandoned, the soldiers succumbing not to enemy cannon fire but bites. New Sweden burned down the fort after the Dutch built Fort Casimir
Fort Casimir
Fort Casimir was a Dutch settlement in 17th century colonial province of New Netherland. It was located on a no-longer existing barrier island at the end of Chestnut Street in what is now New Castle, Delaware...
across the river in 1655. The actual site is now under water at Elsinboro Point. There is a black stone monument of the fort outside the Elsinboro Township School. The stone block came from an old fortress in Sweden built in the 13th century.