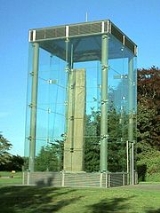 Encyclopedia
Forres is a town and former royal burgh
Royal burgh
A royal burgh was a type of Scottish burgh which had been founded by, or subsequently granted, a royal charter. Although abolished in 1975, the term is still used in many of the former burghs....
situated in the north of Scotland
Scotland
Scotland is a country that is part of the United Kingdom. Occupying the northern third of the island of Great Britain, it shares a border with England to the south and is bounded by the North Sea to the east, the Atlantic Ocean to the north and west, and the North Channel and Irish Sea to the...
on the Moray
Moray
Moray is one of the 32 council areas of Scotland. It lies in the north-east of the country, with coastline on the Moray Firth, and borders the council areas of Aberdeenshire and Highland.- History :...
coast, approximately 30 miles east of Inverness
Inverness
Inverness is a city in the Scottish Highlands. It is the administrative centre for the Highland council area, and is regarded as the capital of the Highlands of Scotland...
. Forres has been a winner of the Scotland in Bloom award on several occasions. There are many geographical and historical attractions nearby such as the River Findhorn
River Findhorn
The River Findhorn is one of the longest rivers in Scotland. Located in the north east, it flows into the Moray Firth on the north coast. It has one of the largest non-firth estuaries in Scotland....
, and there are many historical artifacts and monuments within the town itself.

Forres is thought to be the "Varris" shown on maps by Ptolemy
Ptolemy
Claudius Ptolemy , was a Roman citizen of Egypt who wrote in Greek. He was a mathematician, astronomer, geographer, astrologer, and poet of a single epigram in the Greek Anthology. He lived in Egypt under Roman rule, and is believed to have been born in the town of Ptolemais Hermiou in the...
almost 2,000 years ago. There was a royal castle there from at least 900 AD and in around 1140 AD it became a royal burgh. Royal burghs were founded by the Kings of Scots of the 12th century to encourage trade and economic improvement. The local abbey
Abbey
An abbey is a Catholic monastery or convent, under the authority of an Abbot or an Abbess, who serves as the spiritual father or mother of the community.The term can also refer to an establishment which has long ceased to function as an abbey,...
was plundered by Wolf of Badenoch. 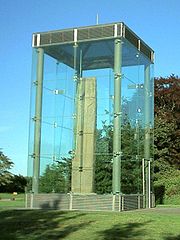 On 23 June 1496 King James IV of Scotland
James IV of Scotland
James IV was King of Scots from 11 June 1488 to his death. He is generally regarded as the most successful of the Stewart monarchs of Scotland, but his reign ended with the disastrous defeat at the Battle of Flodden Field, where he became the last monarch from not only Scotland, but also from all...
issued a Royal Charter
Royal Charter
A royal charter is a formal document issued by a monarch as letters patent, granting a right or power to an individual or a body corporate. They were, and are still, used to establish significant organizations such as cities or universities. Charters should be distinguished from warrants and...
laying down the rights and privileges which the town's people are believed to have held by an earlier charter since the reign of King David I
David I of Scotland
David I or Dabíd mac Maíl Choluim was a 12th-century ruler who was Prince of the Cumbrians and later King of the Scots...
some 300 years earlier.

Forres has grown in recent years and now has almost 9,000 inhabitants. Sitting between the floodplain of the River Findhorn and the wooded slopes of Cluny
Cluny Hill
Cluny Hill is a hill on south side of Forres, Scotland.At the top of Cluny Hill is Nelson's Tower, built in 1806 to commemorate Admiral Lord Nelson and his victory at Trafalgar. The Tower is open to the public....
and Sanquhar Hills, Forres is well known for its award winning floral sculptures and is steeped in local history and traditions. There are a number of bars and pubs, including The Newmarket, The Red Lion locally known as the "Beastie", The Mosset Tavern, and The Carlton Hotel.

The town is the location of Sueno's Stone
Sueno's Stone
Sueno's Stone stands over 6.5 metres high and is a Picto-Scottish Class III standing stone on the north-easterly edge of Forres, Scotland. It is the largest surviving Pictish stone of its type in Scotland...
, an enormous carved stone, probably created by Picts
Picts
The Picts were a group of Late Iron Age and Early Mediaeval people living in what is now eastern and northern Scotland. There is an association with the distribution of brochs, place names beginning 'Pit-', for instance Pitlochry, and Pictish stones. They are recorded from before the Roman conquest...
to commemorate a battle against Norse
Norsemen
Norsemen is used to refer to the group of people as a whole who spoke what is now called the Old Norse language belonging to the North Germanic branch of Indo-European languages, especially Norwegian, Icelandic, Faroese, Swedish and Danish in their earlier forms.The meaning of Norseman was "people...
invaders. It is 20 feet (6 metres) tall and encased in glass structure to protect it from the elements. Suenos Stone translates to Svens Stone.Brodie Castle
Brodie Castle
Brodie Castle is a castle near Forres in the Moray region of Scotland.- The Brodie Family :The original Z-plan castle was built in 1567 by Clan Brodie but destroyed by fire in 1645 by Lewis Gordon of Clan Gordon, the 3rd Marquess of Huntly...
lies near the town.

Other attractions to the town include Dallas Dhu Distillery which lies just south of the town. Although no longer in production it is maintained in working order by Historic Scotland. Benromach Distillery is an active distillery and has a visitors centre. It is located just north of the Forres bypass.

Shakespeare's play Macbeth
Macbeth
The Tragedy of Macbeth is a play by William Shakespeare about a regicide and its aftermath. It is Shakespeare's shortest tragedy and is believed to have been written sometime between 1603 and 1607...
locates Duncan's castle here . Macbeth's castle was located at Inverness.

The town has a network of footpaths that have been established and waymarked by the Forres Footpaths Trust in recent years.

Forres has also just completed a multi-million pound flood prevention scheme at Chapletonmoss and in front of the Mosset Tavern in the town centre.

As with the rest of the British Isles
British Isles
The British Isles are a group of islands off the northwest coast of continental Europe that include the islands of Great Britain and Ireland and over six thousand smaller isles. There are two sovereign states located on the islands: the United Kingdom of Great Britain and Northern Ireland and...
and Scotland, Forres experiences a maritime climate with cool summers and mild winters. The nearest official Metoffice weather station for which online records are available is Kinloss, about 3 miles north east of the town centre. The lowest temperature to be recorded in recent years was -16.0 C during December 2010.

Forres is situated on the A96 trunk route connecting the cities of Aberdeen
Aberdeen
Aberdeen is Scotland's third most populous city, one of Scotland's 32 local government council areas and the United Kingdom's 25th most populous city, with an official population estimate of ....
and Inverness
Inverness
Inverness is a city in the Scottish Highlands. It is the administrative centre for the Highland council area, and is regarded as the capital of the Highlands of Scotland...
. The River Findhorn
River Findhorn
The River Findhorn is one of the longest rivers in Scotland. Located in the north east, it flows into the Moray Firth on the north coast. It has one of the largest non-firth estuaries in Scotland....
was originally crossed by fording near Waterford Farm. A Suspension Bridge
Suspension bridge
A suspension bridge is a type of bridge in which the deck is hung below suspension cables on vertical suspenders. Outside Tibet and Bhutan, where the first examples of this type of bridge were built in the 15th century, this type of bridge dates from the early 19th century...
was opened in 1831 to cross the river at the west end of the town. This bridge was replaced by the current bridge in 1938. Due to high volumes of traffic passing through the town centre, a bypass was built in the late 1980s to reduce congestion in the town centre. The A980 connects Forres with Grantown-on-Spey
Grantown-on-Spey
Grantown-on-Spey is a town in the Highland Council Area in Scotland.It was founded in 1765 as a planned settlement on a low plateau at Freuchie beside the river Spey at the northern edge of the Cairngorm mountains, about 20 miles South East of Inverness .It is the main town in what was the...
, Aviemore
Aviemore
Aviemore is a town and tourist resort, situated within the Cairngorms National Park in the Highlands of Scotland. It is in the Badenoch and Strathspey committee area, within the Highland council area. The town is popular for skiing and other winter sports, and for hill-walking in the Cairngorm...
and the south directly without the requirement of driving via Inverness. The B9011 connects Forres to RAF Kinloss
RAF Kinloss
RAF Kinloss is a Royal Air Force station near Kinloss, on the Moray Firth in the north of Scotland. It opened on 1 April 1939 and served as an RAF training establishment during the Second World War. After the war it was handed over to Coastal Command to watch over Russian ships and submarines in...
and Findhorn Bay. Findhorn is well known for its beach, boats and is home to the Findhorn Foundation
Findhorn Foundation
The Findhorn Foundation is a Scottish charitable trust registered in 1972, formed by the spiritual community at the Findhorn Ecovillage, one of the largest intentional communities in Britain....
, a spiritual community.

Forres railway station
Forres railway station
Forres railway station serves the town of Forres, Moray in Scotland. The station is managed by First ScotRail and is on the Aberdeen to Inverness Line....
is situated just outside of the town and is operated by First ScotRail
First ScotRail
ScotRail Railways Ltd. is the FirstGroup-owned train operating company running domestic passenger trains within Scotland, northern England and the cross-border Caledonian Sleeper service to London using the brand ScotRail which is the property of the Scottish Government...
. The town of Forres was once a junction in the Highland Railway
Highland Railway
The Highland Railway was one of the smaller British railways before the Railways Act 1921; it operated north of Perth railway station in Scotland and served the farthest north of Britain...
network, travelling through Forres was once the quickest route to reach Inverness from the south.
Originally the station had three platforms; two of which operated on the route between Inverness and Aberdeen and a third which operated a service to Grantown-on-Spey. Only one platform remains in service today. The service to Grantown-on-Spey was closed in the 1960s and now forms part of The Dava Way, a scenic footpath connecting the two towns. The Inverness-Aberdeen down platform was also closed in the 1960s; although it still exists, it remains abandoned in-situ and its rail track and over-bridge have been removed.

Inverness Airport is approximately 30 minutes away by road and provides links mainly to other airports within the UK.

Forres Harriers is the local running club with around 80 members. The most famous Harrier is Don Ritchie who at one time held 14 World Best Times for ultra distance running events ranging from 50 km to 200 km.