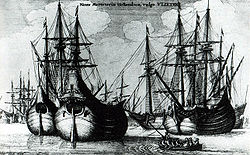 The standard fluyt design minimized or completely eliminated its armaments to maximize available cargo space, and used block and tackle
Block and tackle
A block and tackle is a system of two or more pulleys with a rope or cable threaded between them, usually used to lift or pull heavy loads.The pulleys are assembled together to form blocks so that one is fixed and one moves with the load...
extensively to facilitate ship operations. This ship class was credited in enhancing Dutch competitiveness in international trade, and was widely employed by the Dutch East India Company
Dutch East India Company
The Dutch East India Company was a chartered company established in 1602, when the States-General of the Netherlands granted it a 21-year monopoly to carry out colonial activities in Asia...
in the 17th and 18th centuries. However, its usefulness caused the fluyt to gain such popularity that similar designs were soon developed by seagoing competitors of the Dutch. For example, the English shipbuilding industry began to adapt the design of the fluyt during the later part of the 17th century as English merchants, seeing how much cheaper the Dutch shipping was, acquired Dutch built ships that were captured during Dutch English wars.

The design of fluyts was largely similar to that of the early galleon
Galleon
A galleon was a large, multi-decked sailing ship used primarily by European states from the 16th to 18th centuries. Whether used for war or commerce, they were generally armed with the demi-culverin type of cannon.-Etymology:...
s. These ships typically weighed 200-300 tons and were approximately 80 feet in length (24.4 m). The pear-shaped vessel had a large cargo bay near the waterline and a relatively narrow deck above. In part, this design was a method used to avoid high taxes collected by Denmark
Denmark
Denmark is a Scandinavian country in Northern Europe. The countries of Denmark and Greenland, as well as the Faroe Islands, constitute the Kingdom of Denmark . It is the southernmost of the Nordic countries, southwest of Sweden and south of Norway, and bordered to the south by Germany. Denmark...
in the Øresund, which was assessed based on area of the main deck. The fluyt was square rigged with two or three masts. Masts were much higher than those of galleons to allow for greater speed. At times fluyts were also armed and served as auxiliary vessels, which was a common practice in the Baltic Sea
Baltic Sea
The Baltic Sea is a brackish mediterranean sea located in Northern Europe, from 53°N to 66°N latitude and from 20°E to 26°E longitude. It is bounded by the Scandinavian Peninsula, the mainland of Europe, and the Danish islands. It drains into the Kattegat by way of the Øresund, the Great Belt and...
.
The source of this article is wikipedia, the free encyclopedia.  The text of this article is licensed under the GFDL.