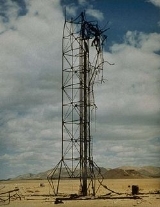 Encyclopedia
In nuclear weapon
Nuclear weapon
A nuclear weapon is an explosive device that derives its destructive force from nuclear reactions, either fission or a combination of fission and fusion. Both reactions release vast quantities of energy from relatively small amounts of matter. The first fission bomb test released the same amount...
s, a fizzle occurs when the testing of a nuclear bomb fails to meet its expected yield
Nuclear weapon yield
The explosive yield of a nuclear weapon is the amount of energy discharged when a nuclear weapon is detonated, expressed usually in the equivalent mass of trinitrotoluene , either in kilotons or megatons , but sometimes also in terajoules...
. The reason(s) for the failure can be linked to improper bomb design, poor construction, or lack of expertise. All countries that have had a nuclear weapons testing program have experienced fizzles. A fizzle can spread radioactive material throughout the surrounding area, involve a partial fission
Nuclear fission
In nuclear physics and nuclear chemistry, nuclear fission is a nuclear reaction in which the nucleus of an atom splits into smaller parts , often producing free neutrons and photons , and releasing a tremendous amount of energy...
reaction of the fissile material, or both. For practical purposes, a fizzle can still have considerable explosive yield when compared to conventional weapons. These considerations were taken into account at the first Trinity test by a vessel named Jumbo.

If a deuterium
Deuterium
Deuterium, also called heavy hydrogen, is one of two stable isotopes of hydrogen. It has a natural abundance in Earth's oceans of about one atom in of hydrogen . Deuterium accounts for approximately 0.0156% of all naturally occurring hydrogen in Earth's oceans, while the most common isotope ...
-tritium
Tritium
Tritium is a radioactive isotope of hydrogen. The nucleus of tritium contains one proton and two neutrons, whereas the nucleus of protium contains one proton and no neutrons...
mixture is placed at the center of the device to be compressed and heated by the fission explosion, a fission yield of 250 tons is sufficient to cause D-T fusion releasing high-energy fusion neutrons which will then fission much of the remaining fission fuel. This is known as a boosted fission weapon
Boosted fission weapon
A boosted fission weapon usually refers to a type of nuclear bomb that uses a small amount of fusion fuel to increase the rate, and thus yield, of a fission reaction. The neutrons released by the fusion reactions add to the neutrons released in the fission, as well as inducing the fission reactions...
.
If a fission device designed for boosting is tested without the boost gas, a yield in the sub-kiloton range may indicate a successful test that the device's implosion and primary fission stages are working as designed, though of course this does not test the boosting process itself.


Nuclear tests considered to be fizzles 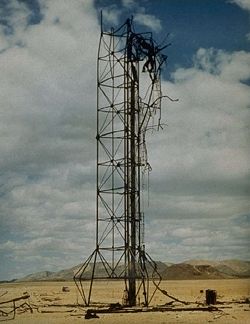 One month after the September 11, 2001 attacks
September 11, 2001 attacks
The September 11 attacks The September 11 attacks The September 11 attacks (also referred to as September 11, September 11th or 9/119/11 is pronounced "nine eleven". The slash is not part of the pronunciation...
, a CIA informant known as "Dragonfire" reported that al-Qaeda
Al-Qaeda
Al-Qaeda is a global broad-based militant Islamist terrorist organization founded by Osama bin Laden sometime between August 1988 and late 1989. It operates as a network comprising both a multinational, stateless army and a radical Sunni Muslim movement calling for global Jihad...
had smuggled a low-yield nuclear weapon into New York City
New York City
New York is the most populous city in the United States and the center of the New York Metropolitan Area, one of the most populous metropolitan areas in the world. New York exerts a significant impact upon global commerce, finance, media, art, fashion, research, technology, education, and...
. Although the report was found to be false, concerns were expressed that a "fizzle bomb" capable of yielding a fraction of the known 10 kiloton weapons could cause “horrific” consequences, and that it could kill thousands.