Encyclopedia
The first dance is an element in a number of traditions, being an opening of a certain dance
Dance
Dance is an art form that generally refers to movement of the body, usually rhythmic and to music, used as a form of expression, social interaction or presented in a spiritual or performance setting....
function: ball
Ball (dance)
A ball is a formal dance. The word 'ball' is derived from the Latin word "ballare", meaning 'to dance'; the term also derived into "bailar", which is the Spanish and Portuguese word for dance . In Catalan it is the same word, 'ball', for the dance event.Attendees wear evening attire, which is...
, prom
Prom
In the United States and Canada, a prom, short for promenade, is a formal dance, or gathering of high school students. It is typically held near the end of the senior year. It figures greatly in popular culture and is a major event among high school students...
, etc. 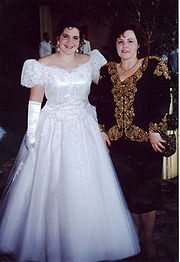 In the context of balls, the term "first dance" has two meanings.

At various formal balls the first dance was led by the guest of honor, which was usually the person of the highest social position in a given context, such as a member of the royal family, if any were present. Their dance was the opening of the ball. As these were generally long country dances, the guests of honor would be the first people to go down the set, not the only two people dancing for the entirety of the first piece of music.

In 17th-century France
France
The French Republic , The French Republic , The French Republic , (commonly known as France , is a unitary semi-presidential republic in Western Europe with several overseas territories and islands located on other continents and in the Indian, Pacific, and Atlantic oceans. Metropolitan France...
, the minuet
Minuet
A minuet, also spelled menuet, is a social dance of French origin for two people, usually in 3/4 time. The word was adapted from Italian minuetto and French menuet, and may have been from French menu meaning slender, small, referring to the very small steps, or from the early 17th-century popular...
, also called "the Queen of Dances", was the first dance.

In the Victorian era
Victorian era
The Victorian era of British history was the period of Queen Victoria's reign from 20 June 1837 until her death on 22 January 1901. It was a long period of peace, prosperity, refined sensibilities and national self-confidence...
of Great Britain
United Kingdom of Great Britain and Ireland
The United Kingdom of Great Britain and Ireland was the formal name of the United Kingdom during the period when what is now the Republic of Ireland formed a part of it....
the first dance was a quadrille
Quadrille
Quadrille is a historic dance performed by four couples in a square formation, a precursor to traditional square dancing. It is also a style of music...
.

In 19th century Russian Empire
Russian Empire
The Russian Empire was a state that existed from 1721 until the Russian Revolution of 1917. It was the successor to the Tsardom of Russia and the predecessor of the Soviet Union...
balls were opened with Polonaise
Polonaise
The polonaise is a slow dance of Polish origin, in 3/4 time. Its name is French for "Polish."The polonaise had a rhythm quite close to that of the Swedish semiquaver or sixteenth-note polska, and the two dances have a common origin....
.

Another meaning is the first occurrence of a young lady in a social gathering. It could have happened either during a usual ball or during a specially arranged debutante ball or cotillion
Cotillion
In American usage, a cotillion is a formal ball and social gathering, often the venue for presenting débutantes during the débutante season – usually May through December. Cotillions are also used as classes to teach social etiquette, respect and common morals for the younger ages with the...
.

The "first dance" of a bride
Bride
A bride is a woman about to be married or newlywed.The word may come from the Proto-Germanic verb root *brū-, meaning 'to cook, brew, or make a broth' which was the role of the daughter-in-law in primitive families...
and groom is a popular element at many post-wedding celebrations in modern European and American
United States
The United States of America is a federal constitutional republic comprising fifty states and a federal district...
traditions. Exactly like an old-fashioned ball, the idea is that the bride and groom, as the guests of honor at a dance, open the dancing, not that they perform a choreographed duet for spectators. First dances, because they are intended to open the dance for all guests, are inappropriate and therefore omitted when there is no other dancing planned for the guests.

In the past, the first wedding dance was commonly a waltz
Waltz
The waltz is a ballroom and folk dance in time, performed primarily in closed position.- History :There are several references to a sliding or gliding dance,- a waltz, from the 16th century including the representations of the printer H.S. Beheim...
. In modern times ballroom dancing is no longer a widespread skill, and rehearsing the "first dance" has become a lucrative business for dance studio
Dance studio
A dance studio is a space in which dancers learn or rehearse. The term is typically used to describe a space that has either been built or equipped for the purpose....
s and independent dance instructors. Today more popular dances include the foxtrot, merengue, and swing. Alternatively, many couples just do a "slow dance
Slow dance
A slow dance is a type of partner dance in which a couple dance slowly, swaying to the music. This is usually done to very slow-beat songs."Slow dancing" can refer to any slow couple dance , but is often associated with a particular, simple style of dance performed by middle school and high school...
". More recently, some couples have been known to introduce a surprise into their dance to shock and humour their audience e.g. by dancing to a song in a mock disco style.

Since these times the phrase "to open the ball" has become a figure of speech
Figure of speech
A figure of speech is the use of a word or words diverging from its usual meaning. It can also be a special repetition, arrangement or omission of words with literal meaning, or a phrase with a specialized meaning not based on the literal meaning of the words in it, as in idiom, metaphor, simile,...
for initiating an activity which will be subsequently continued by others. The term has been used in descriptions of battle scenes.