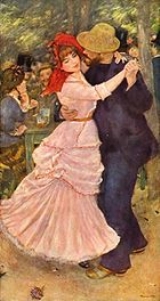 The waltz is a ballroom
Ballroom dance
Ballroom dance refers to a set of partner dances, which are enjoyed both socially and competitively around the world. Because of its performance and entertainment aspects, ballroom dance is also widely enjoyed on stage, film, and television....
and folk
Folk dance
The term folk dance describes dances that share some or all of the following attributes:*They are dances performed at social functions by people with little or no professional training, often to traditional music or music based on traditional music....
dance
Dance
Dance is an art form that generally refers to movement of the body, usually rhythmic and to music, used as a form of expression, social interaction or presented in a spiritual or performance setting....
in time
Time signature
The time signature is a notational convention used in Western musical notation to specify how many beats are in each measure and which note value constitutes one beat....
, performed primarily in closed position
Closed position
In partner dancing, closed position is a category of positions in which partners hold each other while facing at least approximately toward each other....
.

There are several references to a sliding or gliding dance,- a waltz, from the 16th century including the representations of the printer H.S. Beheim. The French philosopher Montaigne wrote of a dance he saw in 1580 in Augsburg
Augsburg
Augsburg is a city in the south-west of Bavaria, Germany. It is a university town and home of the Regierungsbezirk Schwaben and the Bezirk Schwaben. Augsburg is an urban district and home to the institutions of the Landkreis Augsburg. It is, as of 2008, the third-largest city in Bavaria with a...
, where the dancers held each other so closely that their faces touched. Kunz Haas, of approximately the same period wrote that, "Now they are dancing the godless, Weller or Spinner." "The vigorous peasant dancer, following an instinctive knowledge of the weight of fall, utilizes his surplus energy to press all his strength into the proper beat of the measure, thus intensifying his personal enjoyment in dancing". The wide, wild steps of the country people became shorter and more elegant when introduced to higher society. Hans Sachs wrote of the dance in his 1568 Eygentliche Beschreibung aller Stände(1568).

At the Austrian Court in Vienna in the late 17th century (1698) ladies were conducted around the room to the tune of a 2 beat measure, which then became the 3/4 of the Nach Tanz (After Dance), upon which couples got into the position for the Weller and waltzed around the room with gliding steps as in an engraving of the Wirtschaft (Inn Festival) given for Peter the Great.

The peasants of Bavaria, Tyrol, and Styria began dancing a dance called Walzer, a dance for couples, around 1750. The Ländler
Ländler
The ländler is a folk dance in 3/4 time which was popular in Austria, south Germany and German Switzerland at the end of the 18th century.It is a dance for couples which strongly features hopping and stamping...
, also known as the Schleifer, a country dance in 3/4 time, was popular in Bohemia, Austria, and Bavaria, and spread from the countryside to the suburbs of the city. While the eighteenth century upper classes continued to dance the minuet
Minuet
A minuet, also spelled menuet, is a social dance of French origin for two people, usually in 3/4 time. The word was adapted from Italian minuetto and French menuet, and may have been from French menu meaning slender, small, referring to the very small steps, or from the early 17th-century popular...
, bored noblemen slipped away to the balls of their servants.

In the 1771 German novel Geschichte des Fräuleins von Sternheim by Sophie von La Roche
Sophie von La Roche
Maria Sophie von La Roche was a German novelist. She was born in Kaufbeuren and died in Offenbach am Main.-Biography:...
, a high-minded character complains about the newly introduced waltz among aristocrats thus: "But when he put his arm around her, pressed her to his breast, cavorted with her in the shameless, indecent whirling-dance of the Germans and engaged in a familiarity that broke all the bounds of good breeding—then my silent misery turned into burning rage."

Describing life in Vienna (dated at either 1776 or 1786), Don Curzio wrote, " The people were dancing mad [...] The ladies of Vienna are particularly celebrated for their grace and movements of waltzing of which they never tire." There is a waltz in the second act finale of the opera "Una Cosa Rara" written by Martin y Soler in 1786. Soler's waltz was marked Andante con moto, or "at a walking pace with motion", but the flow of the dance was sped-up in Vienna leading to the Geschwindwalzer, and the Galloppwalzer.

In the transition from country to town, the hopping of the Ländler, a dance known as Langaus, became a sliding step, and gliding rotation replaced stamping rotation.

In the 19th century the word primarily indicated that the dance was a turning one; one would "waltz" in the polka
Polka
The polka is a Central European dance and also a genre of dance music familiar throughout Europe and the Americas. It originated in the middle of the 19th century in Bohemia...
to indicate rotating rather than going straight forward without turning.

The Viennese custom is to slightly anticipate the second beat, which conveys a faster, lighter rhythm, and also breaks of the phrase. The younger Strauss would sometimes break up the one-two-three of the melody with a one-two pattern in the accompaniment along with other rhythms, maintaining the 3/4 time while causing the dancers to dance a two-step waltz. The metronome speed for a full bar varies between 60 and 70, with the waltzes of the first Strauss often played faster than those of his sons.

Shocking many when it was first introduced, the waltz became fashionable in Vienna
Vienna
Vienna is the capital and largest city of the Republic of Austria and one of the nine states of Austria. Vienna is Austria's primary city, with a population of about 1.723 million , and is by far the largest city in Austria, as well as its cultural, economic, and political centre...
around the 1780s, spreading to many other countries in the years to follow. It became fashionable in Britain
United Kingdom
The United Kingdom of Great Britain and Northern IrelandIn the United Kingdom and Dependencies, other languages have been officially recognised as legitimate autochthonous languages under the European Charter for Regional or Minority Languages...
during the Regency period, though the entry in the Oxford English Dictionary shows that it was considered "riotous and indecent" as late as 1825. The waltz, and especially its closed position, became the example for the creation of many other ballroom dances. Subsequently, new types of waltz have developed, including many folk and several ballroom dances.

In the 19th and early 20th century, numerous different waltz forms existed, including versions performed in 2/4 or 6/8 (sauteuse), and 5/4 time (5/4 waltz, half and half)

In the 1910s, a form called the "Hesitation Waltz" was introduced by Vernon and Irene Castle
Vernon and Irene Castle
Vernon and Irene Castle were a husband-and-wife team of ballroom dancers of the early 20th century. They are credited with invigorating the popularity of modern dancing. Vernon Castle was born William Vernon Blyth in Norwich, Norfolk, England...
. It incorporated Hesitations and was danced to fast music. A hesitation is basically a halt on the standing foot during the full waltz measure, with the moving foot suspended in the air or slowly dragged. Similar figures (Hesitation Change, Drag Hesitation, and Cross Hesitation) are incorporated in the International Standard Waltz Syllabus.

The Country Western Waltz is mostly progressive, moving counter clock wise around the dance floor. Both the posture and frame are relaxed, with posture bordering on a slouch. The exaggerated hand and arm gestures of some ballroom styles are not part of this style. Couples may frequently dance in the promenade position
Promenade position
The promenade position is a dance position in ballroom and other dances. It is described differently in various dance categories.-Connection:...
, depending on local preferences. Within Country Western waltz there are the Spanish Waltz and the more modern (for the late 1930s- early 1950s) Pursuit Waltz. At one time it was considered ill treatment for a man to make the woman walk backwards in some locations.

In California the waltz was banned by Mission fathers until after 1834 because of the "closed" dance position. Thereafter a Spanish Waltz was danced. This Spanish Waltz was a combination of dancing around the room in closed position, and a "formation" dance of two couples facing each other and performing a sequence of steps. "Valse a Trois Temps" was the "earliest" waltz step, and the Rye Waltz was favored as a couple dance.