Encyclopedia
The firmament is the vault or expanse of the sky. According to Genesis, God created the firmament to separate the oceans from other waters above.

The English word "firmament" is first recorded in the 13th century. It is directly anglicised from Latin firmamentum, from the Vulgate
Vulgate
The Vulgate is a late 4th-century Latin translation of the Bible. It was largely the work of St. Jerome, who was commissioned by Pope Damasus I in 382 to make a revision of the old Latin translations...
, which literally means a support. In Latin this word is based on the root firmus, which means (and indeed via French gave rise to the word) "firm". The King James Bible entrenched the use of the term "firmament".
The welkin, (plural: wolcnum), as in the set phrase “make the welkin ring”, is a term found in early literature and poetry, such as Beowulf
Beowulf
Beowulf , but modern scholars agree in naming it after the hero whose life is its subject." of an Old English heroic epic poem consisting of 3182 alliterative long lines, set in Scandinavia, commonly cited as one of the most important works of Anglo-Saxon literature.It survives in a single...
, Chaucer and Shakespeare. It comes from the Old English word for “cloud”, wolcen, and is related to German Wolke and Dutch wolk.

The word "firmament" is meant to correspond with the word raqia, or raqiya` , as used in Biblical Hebrew.

Firmamentum was used in the Vulgate, a 4th century Latin translation of the Christian bible. This term was consistent with the previous (circa 200 BC) Septuagint translation of the Old Testament which used the Greek stereoma, meaning solid structure, and with the notion of solidity advanced explicitly by other biblical passages.

The choice of translation is controversial because it affects how prominent the discord with modern cosmology first appears. It is argued that liberal Christians
Liberal Christianity
Liberal Christianity, sometimes called liberal theology, is an umbrella term covering diverse, philosophically and biblically informed religious movements and ideas within Christianity from the late 18th century and onward...
(and nonbelievers) are biased toward accepting a translation that favours critical
Biblical criticism
Biblical criticism is the scholarly "study and investigation of Biblical writings that seeks to make discerning judgments about these writings." It asks when and where a particular text originated; how, why, by whom, for whom, and in what circumstances it was produced; what influences were at work...
and nonliteral interpretation (e.g., "firmament") whilst conservatives and fundamentalists
Biblical literalism
Biblical literalism is the interpretation or translation of the explicit and primary sense of words in the Bible. A literal Biblical interpretation is associated with the fundamentalist and evangelical hermeneutical approach to Scripture, and is used almost exclusively by conservative Christians...
seek a translation by which the scripture may harmonise with scientific knowledge (e.g., "expanse" implying empty sky).

The word is used in the Genesis creation narrative:

The modern bible, and non-canonical related texts, present a detailed view of cosmology that is incompatible with modern scientific knowledge. The firmament was a great tent-like ceiling made of solid crystalline material, which might be pierced by skyscraper
Tower of Babel
The Tower of Babel , according to the Book of Genesis, was an enormous tower built in the plain of Shinar .According to the biblical account, a united humanity of the generations following the Great Flood, speaking a single language and migrating from the east, came to the land of Shinar, where...
and gimlet. It had many windows, some of which opened and closed for the sun and moon to travel through or to let water, which was held above, fall through as rain. On top there were also warehouses of snow and hail. Stars were small objects that were attached tenuosly to its surface.

The Jewish Encyclopaedia describes the firmament as follows:

The Hebrews regarded the earth as a plain or a hill figured like a hemisphere, swimming on water. Over this is arched the solid vault of heaven. To this vault are fastened the lights, the stars. So slight is this elevation that birds may rise to it and fly along its expanse.

Augustine wrote that too much learning had been expended on the nature of the firmament. "We may understand this name as given to indicate not it is motionless but that it is solid." he wrote. Saint Basil argued for a fluid firmament. According to St. Thomas Aquinas
Thomas Aquinas
Thomas Aquinas, O.P. , also Thomas of Aquin or Aquino, was an Italian Dominican priest of the Catholic Church, and an immensely influential philosopher and theologian in the tradition of scholasticism, known as Doctor Angelicus, Doctor Communis, or Doctor Universalis...
, the firmament had a "solid nature" and stood above a "region of fire, wherein all vapor must be consumed."

The Copernican Revolution
Copernican Revolution
The Copernican Revolution refers to the paradigm shift away from the Ptolemaic model of the heavens, which postulated the Earth at the center of the galaxy, towards the heliocentric model with the Sun at the center of our Solar System...
of the 16th century led to reconsideration of these matters. In 1554, John Calvin
John Calvin
John Calvin was an influential French theologian and pastor during the Protestant Reformation. He was a principal figure in the development of the system of Christian theology later called Calvinism. Originally trained as a humanist lawyer, he broke from the Roman Catholic Church around 1530...
proposed that "firmament" be interpreted as clouds. "He who would learn astronomy and other recondite arts, let him go elsewhere," wrote Calvin. Genesis had to conform to popular prejudice regarding cosmology, or it would not have been accepted. "As it became a theologian, [Moses] had to respect us rather than the stars," Calvin wrote. Calvin's "doctrine of accommodation
Accommodation (religion)
Accommodation is the theological principle that God, while being in his nature unknowable and unreachable, has nevertheless communicated with mankind in a way in which humans can understand and respond....
" allowed Protestants to accept the findings of science without rejecting the authority of scripture
John Calvin's view of Scripture
The doctrine of Scripture plays a vital role in the writings of John Calvin. John Calvin's view of Scripture can be found mainly in his Institutes of the Christian Religion.-Necessity:Calvin viewed Scripture as necessary in two ways....
. According to present Catholic
Catholic
The word catholic comes from the Greek phrase , meaning "on the whole," "according to the whole" or "in general", and is a combination of the Greek words meaning "about" and meaning "whole"...
doctrine, the bible simply reflects the cosmological ideas that were prevalent at the time it was written.

The Greeks and Stoics adopted a model of celestial spheres
Celestial spheres
The celestial spheres, or celestial orbs, were the fundamental entities of the cosmological models developed by Plato, Eudoxus, Aristotle, Ptolemy, Copernicus and others...
after the discovery of the sphericity of the Earth in the 4th to 3rd centuries BC. The Medieval Scholastics adopted a cosmology that fused the ideas of the Greek philosophers Aristotle
Aristotle
Aristotle was a Greek philosopher and polymath, a student of Plato and teacher of Alexander the Great. His writings cover many subjects, including physics, metaphysics, poetry, theater, music, logic, rhetoric, linguistics, politics, government, ethics, biology, and zoology...
and Ptolemy
Ptolemy
Claudius Ptolemy , was a Roman citizen of Egypt who wrote in Greek. He was a mathematician, astronomer, geographer, astrologer, and poet of a single epigram in the Greek Anthology. He lived in Egypt under Roman rule, and is believed to have been born in the town of Ptolemais Hermiou in the...
. This cosmology involved celestial orbs, nested concentrically inside one another, with the earth at the centre. The outermost orb contained the stars and the term firmament was then transferred to this orb. (There were seven inner orbs for the seven wanderers of the sky, and their ordering is preserved in the naming of the days
Week-day names
The names of the days of the week from the Roman period have been both named after the seven planets of classical astronomy and numbered, beginning with Monday. In Slavic languages, a numbering system was adopted, but beginning with Monday. There was an even older tradition of names in Ancient...
of the week.)

Even Copernicus' heliocentric model included an outer sphere that held the stars (and by having the earth rotate daily on its axis it allowed the firmament to be completely stationary). Tycho Brahe
Tycho Brahe
Tycho Brahe , born Tyge Ottesen Brahe, was a Danish nobleman known for his accurate and comprehensive astronomical and planetary observations...
's studies of the nova of 1572 and the comet of 1577 were the first major challenges to the idea that orbs existed as solid, incorruptible, material objects.

In 1584, Bruno
Giordano Bruno
Giordano Bruno , born Filippo Bruno, was an Italian Dominican friar, philosopher, mathematician and astronomer. His cosmological theories went beyond the Copernican model in proposing that the Sun was essentially a star, and moreover, that the universe contained an infinite number of inhabited...
proposed a cosmology without firmament: an infinite universe in which the stars are actually suns with their own planetary systems. After Galileo began using a telescope
Telescope
A telescope is an instrument that aids in the observation of remote objects by collecting electromagnetic radiation . The first known practical telescopes were invented in the Netherlands at the beginning of the 1600s , using glass lenses...
to examine the sky, it became harder to argue that the heavens were perfect, as Aristotlean philosophy required. By 1630, the concept of solid orbs was no longer dominant. 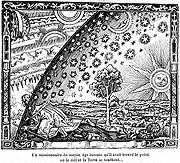 The notion of the sky as a solid object (rather than just an atmospheric expanse) was widespread among both ancient civilisations and primitive cultures, including ancient Greece, Egypt, China, India, native Americans, Australian aborigines, and also early Christians. It is probably a universal human trait to perceive the sky as a solid dome.

As an example, the sky is imagined as a solid dome arched over the earth in both Mesopotamian and Indo-European mythologies (e.g., creation myths) and poetry; the Sumerian sky-god An
Anu
In Sumerian mythology, Anu was a sky-god, the god of heaven, lord of constellations, king of gods, Consort of Antu, spirits and demons, and dwelt in the highest heavenly regions. It was believed that he had the power to judge those who had committed crimes, and that he had created the stars as...
(and his later Akkadian and Babylonian counterpart "Anu") ruled these firmament-like "heavens", which the wind-god had separated from the flat disc of the earth below, and there were primordial seas above the firmament (echoed in the Hebrew Bible).