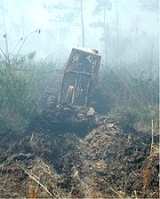 Encyclopedia
A firebreak is a gap in vegetation
Vegetation
Vegetation is a general term for the plant life of a region; it refers to the ground cover provided by plants. It is a general term, without specific reference to particular taxa, life forms, structure, spatial extent, or any other specific botanical or geographic characteristics. It is broader...
or other combustible material that acts as a barrier to slow or stop the progress of a bushfire or wildfire
Wildfire
A wildfire is any uncontrolled fire in combustible vegetation that occurs in the countryside or a wilderness area. Other names such as brush fire, bushfire, forest fire, desert fire, grass fire, hill fire, squirrel fire, vegetation fire, veldfire, and wilkjjofire may be used to describe the same...
. A firebreak may occur naturally where there is a lack of vegetation or "fuel
Fuel
Fuel is any material that stores energy that can later be extracted to perform mechanical work in a controlled manner. Most fuels used by humans undergo combustion, a redox reaction in which a combustible substance releases energy after it ignites and reacts with the oxygen in the air...
", such as a river, lake or canyon. Firebreaks may also be man-made, and many of these also serve as roads, such as a logging
Logging
Logging is the cutting, skidding, on-site processing, and loading of trees or logs onto trucks.In forestry, the term logging is sometimes used in a narrow sense concerning the logistics of moving wood from the stump to somewhere outside the forest, usually a sawmill or a lumber yard...
road, four-wheel drive
Four-wheel drive
Four-wheel drive, 4WD, or 4×4 is a four-wheeled vehicle with a drivetrain that allows all four wheels to receive torque from the engine simultaneously...
trail, secondary road, or a highway
Highway
A highway is any public road. In American English, the term is common and almost always designates major roads. In British English, the term designates any road open to the public. Any interconnected set of highways can be variously referred to as a "highway system", a "highway network", or a...
. 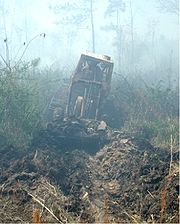 In the construction of a firebreak, the primary goal is to remove deadwood and undergrowth down to mineral soil. Various methods may be used to accomplish this initially and to maintain this condition. Ideally, the firebreak will be constructed and maintained according to the established practices of sustainable forestry
Forestry
Forestry is the interdisciplinary profession embracing the science, art, and craft of creating, managing, using, and conserving forests and associated resources in a sustainable manner to meet desired goals, needs, and values for human benefit. Forestry is practiced in plantations and natural stands...
and fire protection engineering
Fire protection engineering
Fire Protection Engineering is the application of science and engineering principles to protect people and their environments from the destructive effects of fire and smoke....
also known as best management pratices (BMP'S). The general goals are to maximize the effectiveness of the firebreak at slowing the spread of wildfire, and by using firebreaks of sufficient size and density to hopefully reduce the ultimate size of wildfires. Additional goals are to maintain the ecology
Ecology
Ecology is the scientific study of the relations that living organisms have with respect to each other and their natural environment. Variables of interest to ecologists include the composition, distribution, amount , number, and changing states of organisms within and among ecosystems...
of the forest and to reduce the impact of wildfires on air pollution
Air pollution
Air pollution is the introduction of chemicals, particulate matter, or biological materials that cause harm or discomfort to humans or other living organisms, or cause damage to the natural environment or built environment, into the atmosphere....
and the global climate
Climate
Climate encompasses the statistics of temperature, humidity, atmospheric pressure, wind, rainfall, atmospheric particle count and other meteorological elemental measurements in a given region over long periods...
, and to balance the costs and benefits
Cost-benefit analysis
Cost–benefit analysis , sometimes called benefit–cost analysis , is a systematic process for calculating and comparing benefits and costs of a project for two purposes: to determine if it is a sound investment , to see how it compares with alternate projects...
of the various projects.

Forested areas often contain vast networks of firebreaks. Some communities
Community
The term community has two distinct meanings:*a group of interacting people, possibly living in close proximity, and often refers to a group that shares some common values, and is attributed with social cohesion within a shared geographical location, generally in social units larger than a household...
are also using firebreaks as part of their city planning strategy
Strategy
Strategy, a word of military origin, refers to a plan of action designed to achieve a particular goal. In military usage strategy is distinct from tactics, which are concerned with the conduct of an engagement, while strategy is concerned with how different engagements are linked...
.

Depending on the environmental conditions, and the relative effectiveness of a given firebreak, firebreaks often have to be backed up with other firefighting efforts. Even then, it is still sometimes possible for fire to spread across a seemingly impenetrable divide. During the worst part of the fire season in southern California
California
California is a state located on the West Coast of the United States. It is by far the most populous U.S. state, and the third-largest by land area...
, strong Santa Ana winds will blow carpets of burning embers across eight-lane freeways. During the 1988 fires
Yellowstone fires of 1988
The Yellowstone fires of 1988 together formed the largest wildfire in the recorded history of the U.S.'s Yellowstone National Park. Starting as many smaller individual fires, the flames spread quickly out of control with increasing winds and drought and combined into one large conflagration, which...
in Yellowstone National Park
Yellowstone National Park
Yellowstone National Park, established by the U.S. Congress and signed into law by President Ulysses S. Grant on March 1, 1872, is a national park located primarily in the U.S. state of Wyoming, although it also extends into Montana and Idaho...
, hot embers managed to cross the Lewis Canyon, a natural canyon up to a mile wide and 600 feet (180 m) deep.

Firebreaks, along with controlled burns, are also the source of the everyday phrase 'fight fire with fire'.