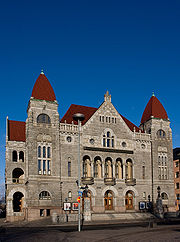 The Finnish National Theatre , founded in 1872 in the city of Pori
Pori
Pori is a city and municipality on the west coast of Finland. The city is located some from the Gulf of Bothnia, on the estuary of the Kokemäenjoki river, which is the largest in Finland. Pori is the most important town in the Satakunta region....
, is located in central Helsinki
Helsinki
Helsinki is the capital and largest city in Finland. It is in the region of Uusimaa, located in southern Finland, on the shore of the Gulf of Finland, an arm of the Baltic Sea. The population of the city of Helsinki is , making it by far the most populous municipality in Finland. Helsinki is...
on the northern side of the Helsinki Central Railway Station Square
Rautatientori
Rautatientori is an open square in central Helsinki, immediately to the east of the Helsinki Central railway station. The square mostly serves as Helsinki's secondary bus station...
. It is the world's oldest theatre with performances in Finnish. It was known as the Finnish Theatre until 1902 when it was renamed the Finnish National Theatre.