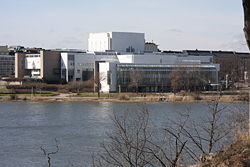 The Finnish National Opera in Helsinki
Helsinki
Helsinki is the capital and largest city in Finland. It is in the region of Uusimaa, located in southern Finland, on the shore of the Gulf of Finland, an arm of the Baltic Sea. The population of the city of Helsinki is , making it by far the most populous municipality in Finland. Helsinki is...
is the leading opera company
Opera house
An opera house is a theatre building used for opera performances that consists of a stage, an orchestra pit, audience seating, and backstage facilities for costumes and set building...
in Finland
Finland
Finland , officially the Republic of Finland, is a Nordic country situated in the Fennoscandian region of Northern Europe. It is bordered by Sweden in the west, Norway in the north and Russia in the east, while Estonia lies to its south across the Gulf of Finland.Around 5.4 million people reside...
. Its home base is the Opera House on Töölönlahti bay in Töölö
Töölö
Töölö is the collective name for the neighbourhoods Etu-Töölö and Taka-Töölö in Helsinki, Finland. The neighbourhoods are located next to the city centre, occupying the western side of the Helsinki Peninsula....
which opened in 1993, and is state-owned through Senate Properties
Senate Properties
Senate Properties is a Finnish unincorporated state-owned enterprise, which manages a major part of the real estate assets owned by the Republic of Finland.-History:...
. The Opera House features state-of-the-art technology and two auditoriums: the main auditorium with 1,350 seats and a smaller studio auditorium with 300 to 500 seats.

Regular opera
Opera
Opera is an art form in which singers and musicians perform a dramatic work combining text and musical score, usually in a theatrical setting. Opera incorporates many of the elements of spoken theatre, such as acting, scenery, and costumes and sometimes includes dance...
performances began in Finland in 1873 with the founding of the Finnish Opera by Kaarlo Bergbom
Kaarlo Bergbom
Kaarlo Bergbom was a Finnish theatre director. He was the founder of the Finnish National Theatre, the first Finnish language theatre company...
. Prior to that, opera had been performed in Finland sporadically by touring companies, and on occasion by Finnish amateurs, the first such production being The Barber of Seville
The Barber of Seville
The Barber of Seville, or The Futile Precaution is an opera buffa in two acts by Gioachino Rossini with a libretto by Cesare Sterbini. The libretto was based on Pierre Beaumarchais's comedy Le Barbier de Séville , which was originally an opéra comique, or a mixture of spoken play with music...
in 1849. However, the Finnish Opera company soon plunged into a financial crisis and folded in 1879. During its six year's of operation, Bergbom’s opera company had given 450 performances of a total of 26 operas, and the company had managed to demonstrate that opera can be sung in Finnish too. After the disbandment of the Finnish Opera, the opera audiences of Helsinki had to confine themselves to performances of visiting opera companies and occasional opera productions at the Finnish National Theatre
Finnish National Theatre
The Finnish National Theatre , founded in 1872 in the city of Pori, is located in central Helsinki on the northern side of the Helsinki Central Railway Station Square. It is the world's oldest theatre with performances in Finnish...
.

The reincarnation of the Finnish opera institution took place about 30 years later. A group of notable social and cultural figures, led by the international star soprano
Soprano
A soprano is a voice type with a vocal range from approximately middle C to "high A" in choral music, or to "soprano C" or higher in operatic music. In four-part chorale style harmony, the soprano takes the highest part, which usually encompasses the melody...
Aino Ackté
Aino Ackté
Aino Ackté was a Finnish soprano. She was the first international star of the Finnish opera scene after Alma Fohström, and a groundbreaker for the domestic field....
, founded the Domestic Opera in 1911. From the very beginning, the opera decided to engage both foreign and Finnish artists. A few years later the Domestic Opera was renamed the Finnish Opera in 1914. In 1956, the Finnish Opera was, in turn, taken over by the Foundation of the Finnish National Opera, and acquired its present name.

Between 1918 and 1993 the home of the opera was the Alexander Theater
Aleksanterin Teatteri
Aleksanterin teatteri , Alexandersteatern is a Finnish theatre in the city of Helsinki at Bulevardi 23-27, also known as Russian Theater and Alexander Theatre.-History:...
, which had been assigned to the company on a permanent basis. The home was inaugurated with an opening performance of Verdi’s
Giuseppe Verdi
Giuseppe Fortunino Francesco Verdi was an Italian Romantic composer, mainly of opera. He was one of the most influential composers of the 19th century...
Aida. When the first dedicated opera house in Finland was finally completed and inaugrated in 1993, the old opera house was given back its original name, the Alexander Theater, after the Tsar
Tsar
Tsar is a title used to designate certain European Slavic monarchs or supreme rulers. As a system of government in the Tsardom of Russia and Russian Empire, it is known as Tsarist autocracy, or Tsarism...
Alexander II
Alexander II of Russia
Alexander II , also known as Alexander the Liberator was the Emperor of the Russian Empire from 3 March 1855 until his assassination in 1881...
.

The Finnish National Opera has some 30 permanently engaged solo singers, a professional choir of 60 singers and its own orchestra of 120 members. The Ballet has 90 dancers from 17 countries. All together, the opera has a staff of 735.

Past music directors and chief conductors have included Okko Kamu
Okko Kamu
Okko Kamu is a Finnish orchestral conductor.Kamu was born into a family of musicians. His father played double bass in the Helsinki Philharmonic. He began violin studies at age two and entered the Sibelius Academy at age six. He formed his own string quartet, the Suhonen, in 1964 where he played...
(1996–2000) and Muhai Tang
Muhai Tang
Muhai Tang is a Chinese conductor. He is the youngest son of celebrated Chinese film director Tang Xiaodan and brother of painter and poet Tang Muli....
(2003–2006). Since 2006, the music director and artistic director is Mikko Franck
Mikko Franck
Mikko Franck is a Finnish conductor. He began to play the violin at the age of 5. By age 7, he reportedly preferred orchestral scores to all other reading matter. His first favorite score was Tchaikovsky’s Symphony No. 6 which he used to conduct while listening to a recording on earphones...
.