Encyclopedia
Finlandia University is a university
University
A university is an institution of higher education and research, which grants academic degrees in a variety of subjects. A university is an organisation that provides both undergraduate education and postgraduate education...
in Hancock, Michigan
Hancock, Michigan
Hancock is a city in Houghton County; the northernmost in the U.S. state of Michigan, located on the Keweenaw Peninsula, or, depending on terminology, Copper Island. The population was 4,634 at the 2010 census...
, United States
United States
The United States of America is a federal constitutional republic comprising fifty states and a federal district...
, and the only private university in the Upper Peninsula
Upper Peninsula of Michigan
The Upper Peninsula of Michigan is the northern of the two major land masses that make up the U.S. state of Michigan. It is commonly referred to as the Upper Peninsula, the U.P., or Upper Michigan. It is also known as the land "above the Bridge" linking the two peninsulas. The peninsula is bounded...
. Founded in 1896 as Suomi College, it is affiliated with the Evangelical Lutheran Church in America
Evangelical Lutheran Church in America
The Evangelical Lutheran Church in America is a mainline Protestant denomination headquartered in Chicago, Illinois. The ELCA officially came into existence on January 1, 1988, by the merging of three churches. As of December 31, 2009, it had 4,543,037 baptized members, with 2,527,941 of them...
. 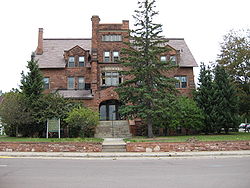 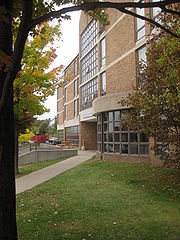 In the 1880s, large numbers of Finns immigrated to Hancock, Michigan
Hancock, Michigan
Hancock is a city in Houghton County; the northernmost in the U.S. state of Michigan, located on the Keweenaw Peninsula, or, depending on terminology, Copper Island. The population was 4,634 at the 2010 census...
to labor in the copper
Copper
Copper is a chemical element with the symbol Cu and atomic number 29. It is a ductile metal with very high thermal and electrical conductivity. Pure copper is soft and malleable; an exposed surface has a reddish-orange tarnish...
and lumber
Lumber
Lumber or timber is wood in any of its stages from felling through readiness for use as structural material for construction, or wood pulp for paper production....
industries. One immigrant, mission pastor J. K. Nikander of the Finnish Evangelical Lutheran Church in America, headquartered in Hancock, wanted to ensure seminary training in America. He had observed that Swedish and Finnish immigrants along the Delaware River
Delaware River
The Delaware River is a major river on the Atlantic coast of the United States.A Dutch expedition led by Henry Hudson in 1609 first mapped the river. The river was christened the South River in the New Netherland colony that followed, in contrast to the North River, as the Hudson River was then...
did not train new ministers, and he feared a loss of Finnish identity. In 1896, Nikander founded Suomi College. The college's role was to preserve Finnish culture, train Lutheran ministers and teach English. During the 1920s, Suomi College became a liberal arts
Liberal arts
The term liberal arts refers to those subjects which in classical antiquity were considered essential for a free citizen to study. Grammar, Rhetoric and Logic were the core liberal arts. In medieval times these subjects were extended to include mathematics, geometry, music and astronomy...
college. In 1958, the seminary separated from the college. On July 1, 2000, Suomi College changed its name to Finlandia University.

The cornerstone of Old Main, the first building erected at Suomi College, was laid on May 30, 1898. Jacobsville sandstone
Jacobsville Sandstone
Jacobsville Sandstone is a red sandstone common to the Upper Peninsula of Michigan. Commonly used as an architectural building stone, it is found in the Keweenaw Peninsula and north shore of the Upper Peninsula. Its name is due to the sandstone being quarried largely in Jacobsville, Michigan....
, quarried at the Portage Entry of the Keweenaw waterway, was brought by barge, cut, and used to construct the Old Main. Dedicated on January 21, 1900, it contained a dormitory, kitchen, laundry, classrooms, offices, library, chapel, and lounge. The burgeoning college quickly outgrew this building. In 1901 a frame structure, housing a gym, meeting hall, and music center, was erected on an adjacent lot. The frame building was demolished when Nikander Hall, named for Suomi's founder, J. K. Nikander, was constructed in 1939. The hall was designed by the architectural firm of Eliel Saarinen
Eliel Saarinen
Gottlieb Eliel Saarinen was a Finnish architect who became famous for his art nouveau buildings in the early years of the 20th century....
and J. Robert F. Swanson. In addition to Old Main, the present day main campus consists of Nikander Hall, Mannerheim Hall, Wargelin Hall, Finlandia Hall, the Paavo Nurmi Center for Physical Education, the Kivi House, Hoover Center, the Finnish American Heritage Center, the Chapel of St. Matthew, and the Jutila Center.

Suomi College in Hancock, Michigan
Hancock, Michigan
Hancock is a city in Houghton County; the northernmost in the U.S. state of Michigan, located on the Keweenaw Peninsula, or, depending on terminology, Copper Island. The population was 4,634 at the 2010 census...
brought hope of a new future to many of the Finnish immigrant mine workers in the Upper Peninsula. These immigrants brought with them a heritage of learning with good character, a tradition of literacy, and a love for freedom and faith. Finlandia University still thrives on these principles.

Serving more than 500 students from ten states and three countries, Finlandia University celebrates the diversity of its student body through education and experience with others. Seven percent of Finlandia University students are members of minority groups and 6 percent are international. Approximately one-fourth of all students live in the co-ed residence hall.

Finlandia University's campus is located in Hancock, Michigan
Hancock, Michigan
Hancock is a city in Houghton County; the northernmost in the U.S. state of Michigan, located on the Keweenaw Peninsula, or, depending on terminology, Copper Island. The population was 4,634 at the 2010 census...
. The University is two hours west of Marquette, Michigan
Marquette, Michigan
Marquette is a city in the U.S. state of Michigan and the county seat of Marquette County. The population was 21,355 at the 2010 census, making it the most populated city of the Upper Peninsula. Marquette is a major port on Lake Superior, primarily for shipping iron ore and is the home of Northern...
; four hours north of Green Bay, Wisconsin
Green Bay, Wisconsin
Green Bay is a city in and the county seat of Brown County in the U.S. state of Wisconsin, located at the head of Green Bay, a sub-basin of Lake Michigan, at the mouth of the Fox River. It has an elevation of above sea level and is located north of Milwaukee. As of the 2010 United States Census,...
; six hours northeast of Minneapolis, Minnesota
Minneapolis, Minnesota
Minneapolis , nicknamed "City of Lakes" and the "Mill City," is the county seat of Hennepin County, the largest city in the U.S. state of Minnesota, and the 48th largest in the United States...
; and eight hours north of Chicago, Illinois. The Houghton County Memorial Airport is five miles north of the campus, and Mont Ripley
Mont Ripley
Mont Ripley is a ski hill in located in Michigan's Upper Peninsula. It is owned by Michigan Technological University. It was founded in the early 1900s and has since grown to one of the premier ski hills in the American Midwest...
, the area ski hill, is about a mile from the campus. Nestled on a hill across the Portage Lake
Portage Lake (Michigan)
Portage Lake is a natural lake, located in Onekama Township in Manistee County, Michigan. The village of Onekama, Michigan is situated at the northeastern end of the lake.-History:...
from Houghton, Michigan
Houghton, Michigan
Houghton is a city in the U.S. state of Michigan's Upper Peninsula and largest city in the Copper Country on the Keweenaw Peninsula. As of the 2010 census, the city population was 7,708. It is the county seat of Houghton County...
, the campus offers an incredible view. Fall colors, winter snowfalls, and spring flowers guarantee a dynamic panorama year-round. Hancock and Houghton also offer students social opportunities for shopping, theater, and dining, all in the natural setting of the Copper Country
Copper Country
The Copper Country is an area in the Upper Peninsula of Michigan in the United States, including all of Keweenaw County, Michigan and most of Houghton, Baraga and Ontonagon counties. The area is so named as copper mining was prevalent there from 1845 until the late 1960s, with one mine ...
.

At the turn of the century, the Keweenaw Peninsula
Keweenaw Peninsula
The Keweenaw Peninsula is the northern-most part of Michigan's Upper Peninsula. It projects into Lake Superior and was the site of the first copper boom in the United States. As of the 2000 census, its population was roughly 43,200...
was the single greatest supplier of copper in the world. Old mine shafts act as a living history of the industry and civilization of the area. The area is rich in Finnish culture; one can still order Pannukakku
Pannukakku
Pannukakku is a Finnish dish that is sometimes referred to as a Finnish pancake. It is made primarily with eggs, milk, flour and sugar. It is yellow and brown in color, and has custard flavor....
(Finnish pancakes) for breakfast at the Kaleva Café or listen to a kantele
Kantele
A kantele or kannel is a traditional plucked string instrument of the zither family native to Finland, Estonia, and Karelia. It is related to the Russian gusli, the Latvian kokle and the Lithuanian kanklės. Together these instruments make up the family known as Baltic psalteries...
concert (a Finnish string instrument) performed in the Finnish American Heritage Center theater.

The rugged terrain of the Keweenaw Peninsula extends into Lake Superior
Lake Superior
Lake Superior is the largest of the five traditionally-demarcated Great Lakes of North America. It is bounded to the north by the Canadian province of Ontario and the U.S. state of Minnesota, and to the south by the U.S. states of Wisconsin and Michigan. It is the largest freshwater lake in the...
, making it great for outdoor activities such as hiking, swimming, canoeing, and camping. From the top of Brockway Mountain to the shores of Lake Superior–on both sides of the peninsula–waterfalls, streams, and wildlife make viewing the area a beautiful spectacle. The winter season is also very active, as students enjoy ice-skating, snowmobiling, hockey, and both downhill and cross-country skiing.

Suomi College of Arts and Sciences

Finlandia University's learning community is committed to service. Members of Finlandia’s learning community have been and remain dedicated to serving others. This commitment dates back to our founders and draws on the basic tenets of Lutheran Higher Education. Opportunities to get involved and make an impact far beyond the classroom walls are abundant. Within the learning community our students, staff, and faculty look for ways to grow and discover more about themselves and their surroundings, and help people in need in the community. We bring our mission statement to life through campus projects, social activities, and partnerships with community members and organizations.

Opened in 2005, Finlandia's second campus, the Jutila Campus, is home to the International School of Art and Design and the Lily I. Jutila Center for Global Design and Business (CGDB). The CGDB provides a collaborative environment for students, faculty, business and industry to lean and apply sustainable business practices and works to foster regional economic development. An on-site small business incubator
Business incubator
Business incubators are programs designed to accelerate the successful development of entrepreneurial companies through an array of business support resources and services, developed and orchestrated by incubator management and offered both in the incubator and through its network of contacts...
provides a supportive environment in which to start and grow a business. CGDB services also include design and business consulting, rapid prototyping
Rapid prototyping
Rapid prototyping is the automatic construction of physical objects using additive manufacturing technology. The first techniques for rapid prototyping became available in the late 1980s and were used to produce models and prototype parts. Today, they are used for a much wider range of applications...
and business training classes.

Students in the International Schools of Business and Art & Design enjoy a variety of overseas educational exchange opportunities to study and experience life abroad.