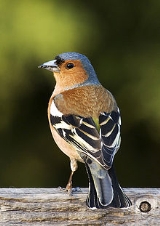 Overview
The true finches are passerine
Passerine
A passerine is a bird of the order Passeriformes, which includes more than half of all bird species. Sometimes known as perching birds or, less accurately, as songbirds, the passerines form one of the most diverse terrestrial vertebrate orders: with over 5,000 identified species, it has roughly...
bird
Bird
Birds are feathered, winged, bipedal, endothermic , egg-laying, vertebrate animals. Around 10,000 living species and 188 families makes them the most speciose class of tetrapod vertebrates. They inhabit ecosystems across the globe, from the Arctic to the Antarctic. Extant birds range in size from...
s in the family
Family (biology)
In biological classification, family is* a taxonomic rank. Other well-known ranks are life, domain, kingdom, phylum, class, order, genus, and species, with family fitting between order and genus. As for the other well-known ranks, there is the option of an immediately lower rank, indicated by the...
Fringillidae. They are predominantly seed
Seed
A seed is a small embryonic plant enclosed in a covering called the seed coat, usually with some stored food. It is the product of the ripened ovule of gymnosperm and angiosperm plants which occurs after fertilization and some growth within the mother plant...
-eating songbird
Songbird
A songbird is a bird belonging to the suborder Passeri of the perching birds . Another name that is sometimes seen as scientific or vernacular name is Oscines, from Latin oscen, "a songbird"...
s. Most are native to the Northern Hemisphere
Northern Hemisphere
The Northern Hemisphere is the half of a planet that is north of its equator—the word hemisphere literally means “half sphere”. It is also that half of the celestial sphere north of the celestial equator...
, but one subfamily is endemic to the Neotropics, one to the Hawaiian Islands
Hawaiian Islands
The Hawaiian Islands are an archipelago of eight major islands, several atolls, numerous smaller islets, and undersea seamounts in the North Pacific Ocean, extending some 1,500 miles from the island of Hawaii in the south to northernmost Kure Atoll...
, and one subfamily – monotypic
Monotypic
In biology, a monotypic taxon is a taxonomic group with only one biological type. The term's usage differs slightly between botany and zoology. The term monotypic has a separate use in conservation biology, monotypic habitat, regarding species habitat conversion eliminating biodiversity and...
at genus
Genus
In biology, a genus is a low-level taxonomic rank used in the biological classification of living and fossil organisms, which is an example of definition by genus and differentia...
level – is found only in the Palaearctic. The scientific name Fringillidae comes from the Latin
Latin
Latin is an Italic language originally spoken in Latium and Ancient Rome. It, along with most European languages, is a descendant of the ancient Proto-Indo-European language. Although it is considered a dead language, a number of scholars and members of the Christian clergy speak it fluently, and...
word fringilla for the Chaffinch
Chaffinch
The Chaffinch , also called by a wide variety of other names, is a small passerine bird in the finch family Fringillidae.- Description :...
(Fringilla coelebs) – a member of that last subfamily – which is common in Europe
Europe
Europe is, by convention, one of the world's seven continents. Comprising the westernmost peninsula of Eurasia, Europe is generally 'divided' from Asia to its east by the watershed divides of the Ural and Caucasus Mountains, the Ural River, the Caspian and Black Seas, and the waterways connecting...
.

Many birds in other families are also commonly called "finches", including some species
Species
In biology, a species is one of the basic units of biological classification and a taxonomic rank. A species is often defined as a group of organisms capable of interbreeding and producing fertile offspring. While in many cases this definition is adequate, more precise or differing measures are...
in the very similar-looking waxbills or estrildid finch
Estrildid finch
The estrildid finches are small passerine birds of the Old World tropics and Australasia. They can be classified as the family Estrildidae , or as a sub-group within the family Passeridae, which also includes the true sparrows....
es (family Passeridae, subfamily Estrildinae) of the Old World tropics and Australia
Australia
Australia , officially the Commonwealth of Australia, is a country in the Southern Hemisphere comprising the mainland of the Australian continent, the island of Tasmania, and numerous smaller islands in the Indian and Pacific Oceans. It is the world's sixth-largest country by total area...
; several groups of the bunting
Bunting (bird)
Buntings are a group of Eurasian and African passerine birds of the family Emberizidae.They are seed-eating birds with stubby, conical bills, and are the Old World equivalents of the species known in North America as sparrows...
and American sparrow
American sparrow
American sparrows are a group of mainly New World passerine birds, forming part of the family Emberizidae. American sparrows are seed-eating birds with conical bills, brown or gray in color, and many species have distinctive head patterns....
family (Emberizidae
Emberizidae
The Emberizidae are a large family of passerine birds. They are seed-eating birds with a distinctively shaped bill.In Europe, most species are called buntings. In North America, most of the species in this family are known as sparrows, but these birds are not closely related to the sparrows, the...
); and Darwin's finches
Darwin's finches
Darwin's finches are a group of 14 or 15 species of passerine birds. It is still not clear which bird family they belong to, but they are not related to the true finches. They were first collected by Charles Darwin on the Galápagos Islands during the second voyage of the Beagle...
of the Galapagos islands, which provided evidence of natural selection and are now recognized to be peculiar tanager
Tanager
The tanagers comprise the bird family Thraupidae, in the order Passeriformes. The family has an American distribution.There were traditionally about 240 species of tanagers, but the taxonomic treatment of this family's members is currently in a state of flux...
s (Thraupidae).

Do the golf finch breed with the red fench?
More
x