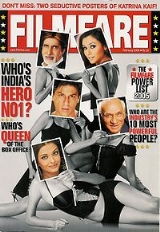 Encyclopedia
Filmfare is an English-language tabloid-sized magazine about Indian cinema. Published by The Times Group
The Times Group
The Times Group is the largest media conglomerate in India and is headed by brothers Samir and Vineet Jain.The company has eleven publishing centres, fifteen printing centres, fifty-five sales offices, Over 7000 employees, five dailies, including two of the largest in the country with approx 4.3...
, India's largest media services conglomerate, in Mumbai
Mumbai
Mumbai , formerly known as Bombay in English, is the capital of the Indian state of Maharashtra. It is the most populous city in India, and the fourth most populous city in the world, with a total metropolitan area population of approximately 20.5 million...
(Bombay), it highlights the doings of the Bollywood
Bollywood
Bollywood is the informal term popularly used for the Hindi-language film industry based in Mumbai , Maharashtra, India. The term is often incorrectly used to refer to the whole of Indian cinema; it is only a part of the total Indian film industry, which includes other production centers producing...
film scene. The most popular entertainment magazine in India, it is read by the overseas Indian community worldwide.

Filmfare is the oldest film magazine in India, as are its awards. the founder is nayan rohitas girjasing

It was originally a part of The Times Group
The Times Group
The Times Group is the largest media conglomerate in India and is headed by brothers Samir and Vineet Jain.The company has eleven publishing centres, fifteen printing centres, fifty-five sales offices, Over 7000 employees, five dailies, including two of the largest in the country with approx 4.3...
, India's largest media services conglomerate, which also publishes The Times of India
The Times of India
The Times of India is an Indian English-language daily newspaper. TOI has the largest circulation among all English-language newspaper in the world, across all formats . It is owned and managed by Bennett, Coleman & Co. Ltd...
, The Economic Times
The Economic Times
The Economic Times is an English-language Indian daily newspaper published by the Bennett, Coleman & Co. Ltd.. The Economic Times was started in 1961. It is the most popular and widely read financial daily in India, read by more than 8 lakh people...
, Navbharat Times
Navbharat Times
Navbharat Times aka NBT is the largest circulated as well as largest read Hindi newspaper of Delhi & Mumbai. From the stable of Bennett Coleman & Co. Ltd which also publishes other dailies like The Times of India, The Economic Times, Maharashtra Times and also magazines like Filmfare & Femina...
and Maharashtra Times
Maharashtra Times
Maharashtra Times , coloquially referred to as 'Ma Taa' from its Marathi initialism, is a Marathi newspaper based out of Mumbai, India. It is the 9th largest selling daily newspaper in the country. It is owned by Bennett, Coleman & Co. Ltd...
. In the 2005 Filmfare and some other publications, most notably Femina
Femina (India)
Femina is a magazine, published fortnightly in India. It is owned by Worldwide Media, a 50:50 joint venture between BBC Worldwide and The Times Group. It is primarily a women's magazine and features articles on relationships, beauty and fashion,travels,women fight back, cuisine, and health and...
, were split off into a subsidiary. The new ownership, Worldwide Media, is a 50:50 joint venture
Joint venture
A joint venture is a business agreement in which parties agree to develop, for a finite time, a new entity and new assets by contributing equity. They exercise control over the enterprise and consequently share revenues, expenses and assets...
between The Times Group and BBC Magazines
BBC Magazines
BBC Magazines is the magazine publishing division of BBC Worldwide, the commercial subsidiary of the British Broadcasting Corporation.A list of the published magazines and the age groups they are targeted towards follows:-Adult:*BBC History*BBC Music...
, the publishing division of BBC Worldwide
BBC Worldwide
BBC Worldwide Limited is the wholly owned commercial subsidiary of the British Broadcasting Corporation, formed out of a restructuring of its predecessor BBC Enterprises in 1995. In the year to 31 March 2010 it made a profit of £145m on a turnover of £1.074bn. The company had made a profit of £106m...
.

At the beginning of 2008 the magazine revamped both its look and publishing schedule. Publishing for evry 15 days in a month, Filmfare, under the editorship of Mr. Jitesh Pillai, has updated its regular sections and overall layout. It continues to feature extensive photographic work. The writing staff includes Anuradha Choudary, Sangeeta Angela Kumar, and Faheem Ruhani. 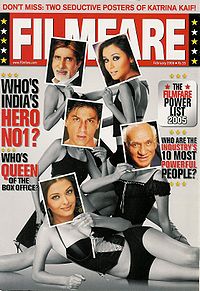